An Interview With Marilyn Levinson/Allison Brook

One of the pleasures of being a member of the mystery writing community is attending writers’ conferences and spending time with the friends you make there. Over the years, I’ve had the good fortune to meet up regularly with Marilyn Levinson, writing also as Allison Brook, at conferences like Sleuthfest and Malice Domestic. Marilyn is also a regular contributor to Writers Who Kill. It was a delight to read the latest book in her Haunted Library series, Death on the Shelf,and to learn more about her and her series.

Death on the Shelf Clover Ridge librarian Carrie Singleton is thrilled to attend her best friend Angela's wedding, but Angela's family can be a bit...much. Angela’s wealthy cousin Donna hosts an extravagant bridal shower at her resplendent home, but the celebrations turn to gossip as the guests notice Donna's surgeon husband, Aiden, spending a bit too much time with Donna’s cousin Roxy. At the wedding reception, the sweet occasion turns darkly bitter when Aiden topples into the chocolate fountain - dead.

The suspect list is as long as the guest list, and as difficult to sort out as the seating chart. A few of the top contenders on Carrie’s suspect list are the flirtatious Roxy, emotionally unstable since her recent divorce; Angela's grouchy brother, who feels Aiden betrayed him; and Roxy's scorned ex-husband. Even Donna may have had reason to want her husband dead. And Aiden's gossipy office manager has plenty to say about them all.

Then another member of Angela's family is murdered, making Carrie more determined than ever to find the killer. Can library ghost Evelyn and library cat Smoky Joe help Carrie solve the murders before she becomes the next of Angela’s wedding guests to head to the grave?

Since you first introduced Carrie Singleton in your Haunted Library series with her purple hair and goth appearance, she has evolved considerably. What accounted for this? 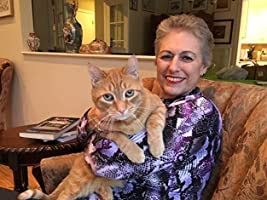 When Carrie came to stay with her great-aunt and uncle in Clover Ridge, she was unhappy and lacking a sense of belonging anywhere. Her goth appearance reflected her lack of purpose. As soon as she is offered the position of head of programs and events at the Clover Ridge Library, she settles into her job and proves to be a hard worker and a responsible citizen.

Evelyn, the library ghost, provides Carrie with information about people in the community, but she is unable to identify villains or directly help Carrie solve a crime. With Evelyn being in the great beyond, why can’t she do more?

Evelyn holds back information when it reflects badly on her two nieces and nephew. She has no more knowledge regarding a murderer's identity than Carrie does. However, Evelyn is in her mid-sixties and occasionally offers thirty-year-old Carrie advice about life in general.

Death on the Shelf features a bridal shower, a wedding, and a murder at the wedding. People love weddings. Did you have to walk a fine line with having the crime happen at the wedding and with who died? 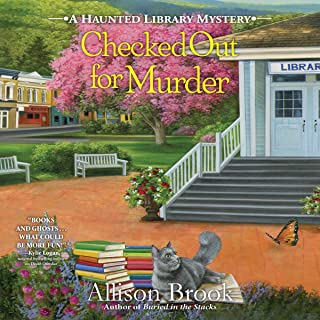 I felt a bit bad about having a wedding guest die during Angela and Steve's wedding. But the murder takes place near the end of the reception and is comical in a noirish way. Of course the murder brings a good deal of anguish to Angela and her family because the victim is a relative and the murderer might also be a relative.

Having a cat at the library seems to be popular with most of the library patrons and with readers. Have you known of a library cat? Are you a cat owner?

Alas, my Sammy died a year and a half ago. I love cats and thought that Smoky Joe, being the sociable feline that he is, would make a wonderful library cat. In Read and Gone he even helps solve a mystery.

Carrie always adored her father, but being a thief, Jim Singleton spent a good deal of Carrie's childhood away from the family. He makes a startling reentry into her life in Read and Gone, the second book in the series. At first Carrie is very wary of rekindling their relationship for fear of getting hurt again. But Jim is determined to atone for his past behavior. He gives up his life of crime, and he works at establishing a solid relationship with Carrie. Ironically, Jim gets a job at   the investigative agency of which Carrie's fiancé is part-owner. 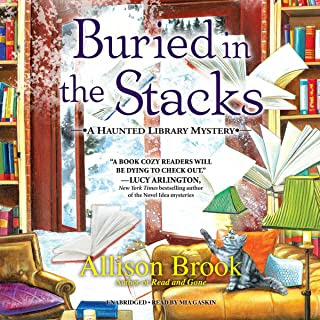 Carrie's mother Linda is another story. She's self-centered, rather pretentious, and not very maternal. In Checked Out For Murder, Linda and her husband Tom come to Clover Ridge because Tom is in a movie being filmed there. Carrie ends up having her mother as a house guest for a short time. While the two women don't suddenly become bosom buddies, Carrie realizes that her mother does love her. She begins to accept that Linda will never be the warm, selfless mother she wishes she were.

With five books in this series, how are you able to keep the series fresh?

While the series continues the ever-evolving development of Carrie and her relationships with friends, colleagues and relatives, I consider each book a new adventure that deals with a different theme, a new set of problems, and a murder or two. And of course each book introduces new characters. I've been told by many readers that each book stands on its own. Someone could enjoy reading Death on the Shelf, for example, without having read the previous four books.

I really enjoyed your Twin Lakes and Golden Age of Mystery Book Club mystery series. Do you ever see yourself adding to those series? Any thought about a possible new series? 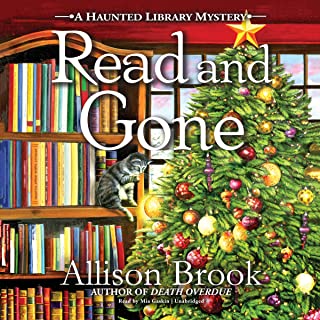 I would love to continue my Twin Lakes and Golden Age of Mystery Book Club series, but I can only write one book at a time, and right now I'm focusing on the Haunted Library series.  I do have an idea for another series, and I would like to try my hand at writing mystery short stories.

With your experience writing for children and your expertise in Spanish, have you ever considered writing children’s books in Spanish?

What is the one thing that has contributed the most to your career as a writer?

Perseverance. I kept on writing despite receiving rejections. Becoming a marketable writer is a process that comes from years of writing.

What has been the best thing for you about being a writer?

I love communicating with readers via Facebook and other social media. Knowing that readers are enjoying my books and are eager to read more of them inspires me to write.

What’s next for Carrie and Dylan? 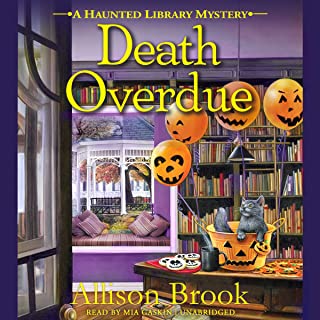 I'm about to start writing book number seven. Carrie and Dylan are engaged and looking forward to their future together. Dylan travels to the Chicago area to retrieve a painting he has inherited, which turns out to be more problematic than he expects with murder and art fraud on the horizon.

Congratulations, Marilyn on your latest creation. Best wishes to it and to you.

Congratulations, Marilyn. You are an inspiration. Your series keep moving ahead, and you have such a loyal following of readers. Hope this book brings you many, many more.

Congratulations on your latest! I hope it's the beginning of a productive year.

Sounds like a great addition to a great series.

Wonderful interview, Grace and Marilyn! Best of luck with Death on the Shelf. I hope Carrie, Evelyn, and Smoky get their villain!

Thank you all for your wonderful support and comments.

Such a loverly interview, Marilyn and Grace. I love going to stores that have a resident cat! Love your covers, too.

Thanks, Vicki! I love my covers, too.