If Your Dreams Don’t Scare You

When Sidney Poitier passed away earlier this month, I saw a meme with the quote, “If your dreams don’t scare you, they are not big enough,” attributed to him. Research shows the same quote attributed to various others as well. 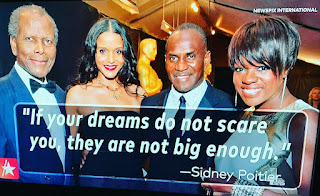 Whoever said it, thank you.

For the last year and a half, I’ve ventured away from the known and the comfortable. A new agent. A new publisher. A foray into indie publishing as well. Change is almost always a mixture of excitement and trepidation. There have been ups and downs as I’ve tread new territory, but overall, the ups have prevailed.

As 2022 begins, I’ve mapped out my writing business plan: marketing and promoting my next release in May, working on a second draft of a new book/new series, and outlining the next Zoe Chambers Mystery.

It’s the outline that’s vexing me.

My goal is to plot and research the story in January so I can buckle down and pound out the first draft in February and March. I already had the seed of an idea for it—two sentences I’d jotted down more than a year ago. But as I flesh out that nugget of a plot, I realize that what started out as a simple (two sentences!) story is anything but.

For one thing, the entire novel (sans epilogue) takes place in less than twenty-four hours. The stakes start out high and ratchet up and up again. It’s not a traditional whodunit although finding a murderer and a missing little girl are at the heart of it. True, we don’t know the identity of the killer, but there are no red herrings. There are, however, obstacles galore.

This will be the twelfth in the Zoe Chambers series and my thirteenth or fourteenth published novel. And it is scaring the heck out of me. I shared the plot with my husband and even he said, “That’s going to be hard to write.” Ha. No kidding. But he also pointed out that with so many books already out there, it would be a good time to push the envelope.

That’s when I spotted the Sidney Poitier meme. “If your dreams don’t scare you, they are not big enough.” I sat back in my chair, stared at those words, and felt a wave of relief.

This new book has been rattling around in my head for a while. Am I a good enough writer to do it justice? I don’t know. But I’m not going to back down from my dream.

Maybe Mr. Poitier didn’t say those words, but I’m grateful to the person who did. I’m also grateful to whoever posted that meme to honor his passing because that was exactly what I needed to see at that moment.

Are you facing any projects or dreams that scare you? Are you going to tackle them anyway?

Annette, you have a fine plan and I'm sure you'll work your way through the scary parts. Best of luck with it.

Good luck! Yes, to both questions.

Thanks, Jim and Margaret.

I've progressed to having a workable outline. Now I'm eager to begin writing! Terrified but eager.

Exactly where you are, Annette. Researching and backstories. Every time I wonder if I can do this again, but at least my plot has more than 24 hours. Good luck!

Susan, it's that 24-hour thing that really has me freaking out. No wiggle room in the timeline!

This is cool, Annette. I believe in you.

You will rock this, Annette. Half the challenge is recognizing that it is a challenge. I’m looking forward to spending a day with Zoe and Pete while they solve the mystery.

It's normal to question your ability to handle all this, but that very trait is one of the things that will help you be successful. You will work hard and make informed decisions rather than thinking success will just happen.

Thanks, Kait and KM.

I have every faith in you, Annette! Can't wait to read the new project!

Thanks, Shari. I can't wait to begin writing it!

Never back down! Or, as they said in Galaxy Quest, "Never give up. Never surrender!" You can do it. Clarice from Ruldoph the Red-Nosed Reindeer also got it right when she sang "There's always tomorrow for dreams to come true." I dream of an Edgar nomination. And every year when the nominations come out, I straighten my shoulders and say, maybe next year.

Barb, I have no doubt your day for an Edgar will come!

Like you, the WIP is the scary dream....but one that must be conquered or at least reached for --- that's why I always liked The Impossible Dream in Man of La Mancha.

You can totally do this Annette! Sydney and I both believe in you! Reading your description seems like part of the thrill for you is the enormity of the challenge. The other thing I repeat to myself at times like this is “I can do hard things!” I can’t wait to read it when you finish. Happy writing !

Thanks, Debra and Kelly (and Sydney!)