Has the Pandemic Changed Your Reading Habits?

By Shari Randall
Like many in the Writers Who Kill circle, mystery is my genre of choice, but lately I’ve noticed a change in my reading habits. Maybe it’s the pandemic, politics, or the general ragged state of the world, but I’ve found solace in another genre: Horror. Yep, horror.
It says a lot about the state of the world that I’ve found escape in a vampire saga and a ghost story/serial killer novel: The Southern Book Club’s Guide to Slaying Vampires and The Sun Down Motel. Why is this? Maybe it’s the satisfaction of closing the book, trapping the frights within the covers? There’s no such thing as vampires, right? Though to be honest, the dread and suspense created by The Sun Down Motel did cost me more than a few hours’ sleep. 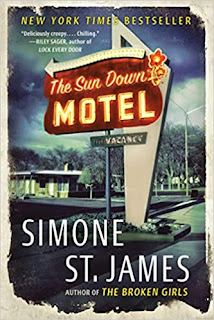 Both books are bestsellers but The Southern Book Club’s Guide to Slaying Vampires included violence toward children, which is a nonstarter for me, and I wish the book had struck more of the sprightly tone of its title. The Sun Down Motel by Simone St. James, on the other hand, delivered more than promised by its prosaic title.
Twenty-year-old Carly Kirk’s beautiful Aunt Viv went missing in 1982, and Carly retraces Viv’s steps thirty years later to appropriately named Fell, New York to discover what happened to her. Carly believes that by following in her aunt’s footsteps, working the night shift at the seedy Sun Down Motel, she’ll find the answer. She finds the answer and much more.
We follow each young woman in dual timelines, and since we already know that Viv goes missing, there’s an almost unbearable suspense to reading her chapters. St. James juggles these dual timelines with enviable ease. Carly’s and Viv’s actions mirror each other in a way that underscores the theme of history repeating itself in a world where women, especially young women, are vulnerable. St. James weaves such an atmosphere of dread I found myself holding my breath as each young woman encounters dangers both flesh and blood, and supernatural.
There are so many facets to this book, but one that struck me was the rage that simmered in both Viv and Carly, rage at a world where women are disposable, where a woman can go missing or be murdered and no one is ever held to account. This reality of the lives of young women is one of the most frightening aspects of a book loaded with them. St. James has crafted a thriller that lives up to the name.
Has the pandemic changed your reading habits?
Shari Randall is the Agatha award winning author of the Lobster Shack Mystery series.
Posted by Shari Randall at 12:00 AM

I’ve found myself reading many more YA and fantasy than usual, fewer crime novels, and hardly any nonfiction. I’ve never found horror much to my liking, even in the capable hands of masters like Stephen King.

Not so much changed by the pandemic as increased. I have always been a voracious reader, but since the pandemic, I can't seem to be without a book or story in hand to fill any downtime.

The pandemic has ended one of my favorite reading pursuits--going to the public library to see what I can find, especially on the "new releases" display. It's always been my primary source of discovery of new authors and books, and now, it's closed to us. Public libraries are valiantly rising to the challenge of serving their patrons, but unfortunately it now requires the patron to have a very good idea of what they want. I miss the serendipitous adventure of exploring!

Jim, I think escape is the name of the game. And however much I admire Stephen King, he's often too scary for me!

Kait, I envy you! I'm glad you're still more than able to enjoy reading.

KM, you've touched on something that's very important to me. I, too, love the serendipity of a good library find, but ours are closed too, and rightly so. I remember days at the library when we'd have over a thousand patrons through the door, readers of all ages from babies to seniors. I keep my fingers crossed that my librarian friends will be included in priority groups for vaccines, since they serve the public, but I'm not holding my breath. Most elected officials have no idea what librarians do or how important they are to their communities. *gets off soap box*

Late to the party but I'll check out the books you're reading. Our Cincinnati Hamilton County library system has curbside pickup.