HID FROM OUR EYES by Julia Spencer-Fleming

We're pleased to welcome Julia Spencer-Fleming to Writers Who Kill. Julia will give a signed copy of her new release to one lucky commentator. 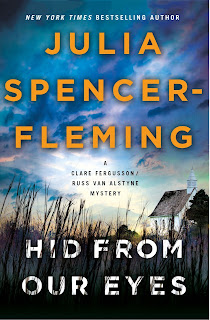 So I have this new book out… Actually, I should start from about 6 ½ years ago, when my last novel, THROUGH THE EVIL DAYS, came out. I started working on the next book in my Clare Fergusson/Russ Van Alstyne series when the new year rolled around. I’m a slow writer at the best of times, and I did not have the best of times for several years. I was sick. One of my kids dropped out of college and needed a massive amount of maternal support. My husband got sick, got worse. Died. Full stop there. When I was able to start working again, it was like squeezing an almost-dry washcloth to get a few drops out. But day by day, drop by drop, I added words, sentences, paragraphs, until I handed in a complete manuscript in January 2019.

My publisher, ecstatic I was back on the scene, decided to hold on to the book and find the exact… perfect… guaranteed New York Times bestselling launch date to release the book. Which turned out to be April 7, 2020.

Oops. As the saying goes, life comes at you fast.

As late as March 11, my publicist and I were still emailing about my tour – flying hither and thither across the country, meeting (hopefully) crowds of readers inside bookstores, shaking hands, passing books back and forth – honestly, it makes me want to dash to the kitchen and wash my hands right now.

A week later, everything had been cancelled. Bookstores were closing their doors to the public, and a week later, pretty much everybody was hunkering down. Like a lot of Americans, I spent hours each day obsessively reading The Times and the Washington Post online, scanning my local paper, and listening to NPR. When I thought about HID FROM OUR EYES -and honestly, it wasn’t often – I’d think, okay, lots of people are stuck at home. What better time to read a book? 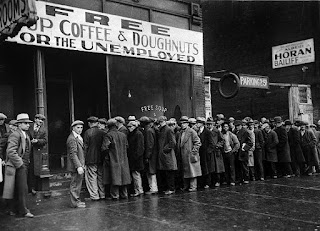 And then 10 million people lost their jobs, and I started to consider how much toilet paper and beans somebody could buy for the cost of a hardcover novel. Behind my eyes, a black-and-white Depression era newsreel started playing, starring me as the starving artist in a bread line. Would there be a WPA job for me? All I could remember from that chapter in American History class were the playwrights and the painters, and I couldn’t help but notice no one in Congress was standing up and making speeches about economically stimulating, um, mystery writers.

It’s okay, though. I’m feeling better now. Several bookstores pivoted to online events without missing a beat, and I’ve done virtual talks on Zoom and Facebook live. We’re doing no-contact book signings, with drop shipments (sent to my house, then on to the booksellers) of books and bookplates. And best of all, authors all over the internet are pitching in to help each other, with recommendations, reviews, Twitter shoutouts and – as you see before you – invitations to blog.

So I have this new book out. I hope you’ll take a look, and maybe buy it from your local bookstore (they ship!) or check it out from your local library (they’re working hard to get ebooks and audio books to as many people as possible.) I hope you’ll also stay home, wash your hands, and be safe.  Because the one thing we’re all learning is how much we need each other, and how important community is. And we want our community, the readers and writers and book sellers and book lovers, to be here when we get past this thing.

HID FROM OUR EYES  1952. Millers Kill Police Chief Harry McNeil is called to a crime scene where a woman in a party dress has been murdered with no obvious cause of death.

1972. Millers Kill Police Chief Jack Liddle is called to a murder scene of a woman that's very similar to one he worked as a trooper in the 50s. The only difference is this time, they have a suspect. Young Vietnam War veteran Russ van Alstyne found the body while riding his motorcycle and is quickly pegged as the prime focus of the investigation.

Present-day. Millers Kill Police Chief Russ van Alstyne gets a 911 call that a young woman has been found dead in a party dress, the same MO as the crime he was accused of in the 70s. The pressure is on for Russ to solve the murder before he's removed from the case.

Three decades. One perfectly imperfect couple. To get to the truth, Reverend Clare Fergusson must team up with her husband, Police Chief Russ Van Alstyne. The stakes have never been higher.


New York Times bestselling novelist Julia Spencer-Fleming took up writing while still a stay-at-home mother, creating Clare Fergusson, first female priest in the small Adirondack town of Millers Kill. Her series has won or been nominated for every American mystery award available, including the Edgar, the Anthony, and the Agatha. You can follow her on Facebook or Twitter. 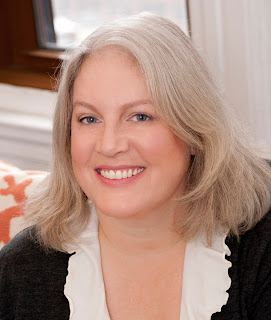 Oh, Julia, this book is so amazing… There is nothing that is going to stop people from snapping it right up! And your zoom event at Poisoned Pen was wonderful— What a treat to see you!

Welcome, Julia! I re-read the entire series last fall and am ready for more adventures with Claire and Russ.

Your books have inspired me from the first few pages where the baby was found in the winter cold. Keep writing. We love your books.

I can't wait to read your new book, Julia. I have tons of other unread books at home, but those can all wait! I'm so glad you continued to write, even amid the challenges and hard times in your life.

You're an inspiration, overcoming so many negative life events and getting back to your writing.

Now is a great time to read, and I have made a dent in my TBR collection. I hope this entire lock-down ends up with your book being a huge success, both while people are stuck at home and afterwards, when you can get out an promote it.

Oh, Hank, thank you so much! It's surprising how much fun those virtual events are - and I love the fact people can ask questions. It's a lot like seeing an author at a bookstore - except from the comfort of your living room.

Margaret, Thank you! I always say the ultimate compliment for a mystery author is rereading, because no one goes back a second time to find out whodunnit.

Lourdes, thank you. I also have a ton of unread books at my house, and I just got two more... For readers, having a stockpile is as important as having those jumbo rolls of toilet paper!

KM, it IS a great time to read! At first we were watching a lot of streaming services, but that felt old after a while. Now you're more likely to find me and my daughters reading of an evening. Life feels slowed down, and that's not entirely a bad thing.

So nice to see you here, Julia, and so happy to have another book with Clare and Russ! I can still remember how I felt when I read those opening lines about the baby in your first book - totally hooked. You readers will rally - I'm off to order a copy from my favorite bookstore, Bank Square Books in Mystic, CT. All best wishes to you and your daughters - glad you can quarantine together.

Oh, Julia, I am so sorry for the pain of the past six years.

I can't wait to catch up with Russ and Clare. The book is on my Kindle waiting for some time this weekend to dig in.

I'm so happy that (I assume) the world's longest pregnancy ever is over! Can't wait to read the book.

Oh gosh, it's been such a long time and hard road for you since we first met at Murder in the Magic City. My much better half, Jan, was so taken with Through the Evil Days that she binge-read the first seven. I took a more leisurely approach. I suspect Jan has Hid From Our Eyes cued up on her Kindle. If not, she soon will.

Giving you a virtual hug and wishing you all the best,

Congratulations on your latest, Julia! I'm new to your series, but I've heard so many great things. I'm looking forward to reading them!

I have been looking forward to your new book! I did not realize the causes of delay, but am just so happy we can all enjoy your characters again. Thank you and congrats.

Hi Julia, I'm so excited for you. Congratulations on Hid From Our Eyes!

Julia, I'm reading it now and can hardly put it down!