Have you heard about authors writing a short story that later is developed into a novel? Like Sue Monk Kidd’s The Secret Life of Bees?

I’m giving Writers Who Kill this exclusive. The blog message you are about to read may one day be developed into a bestselling (how I wish!) novel, called “Killing Paula.” (After hearing this story, a friend gave me that title, along with some excellent plot suggestions, and told me I could use them. Thank you, Phil Lenski. I’ll be sure to mention you in the acknowledgements.)
Dear readers, I begin with my journey to Myrtle Beach to meet with cousins and friends and enjoy a lovely vacation. I had dodged Hurricane Dorian, which came through the week before. (I would say “dodged the bullet,” but don't let me get ahead of myself.) The weather was hot, but beautiful, and I was anticipating wonderful company and food.

To make the journey, I decided to get a rental car and signed up for roadside assistance. The trip to the beach was delightful. I enjoyed seeing sights I remembered from past travels.

On my route, I drove through the small town of Gallivants Ferry, a place which has been known for generations as the location of political stump meetings. In fact, the Democratic Presidential candidates were scheduled to appear there for a debate on the Monday after I returned home.

Just as I passed the Gallivants Ferry Convenience Store, I heard a loud pop and an electronic notice appeared on the dashboard that my tire pressure was low. I didn’t need to be informed. I’ve experienced flat tires before. 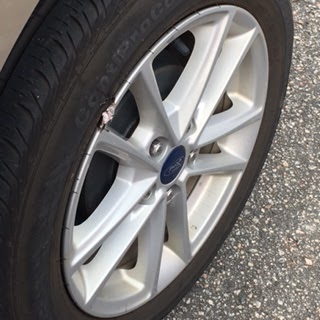 I pulled into the store’s parking lot. Sure enough, the rear tire on the driver’s side was flat as a chunk of butter sizzling in a hot pan. My roadside service paid off. A local company was dispatched and arrived sooner than predicted.

When my rescuer jacked up the car to put on the spare, he pointed to the dent in the rim of the hub cap. It had a red tint around the edge. We were both puzzled about what might have caused the damage. 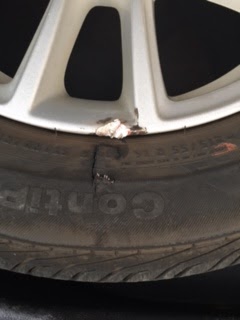 I conferred with my experts (friends who know about guns and mysteries) and learned that some bullets contain a red substance that leaves a mark. A friend sent me a Guns and Ammo article about the FBI’s “new duty load” with a red interior.
The rental car company asked me to trade the car for another, so I wouldn’t be putting a lot of miles on the spare. After getting supper and checking into the hotel, I headed for the rental car office at the Myrtle Beach airport.

In the humid heat of the night, I followed the parking lot arrows to a place where a woman (I later learned her name was Nancy) sat in a lounge chair with a cooler. She checked me in and opened the trunk to look at the damaged tire. That was when we discovered the hole. Please consider the evidence: 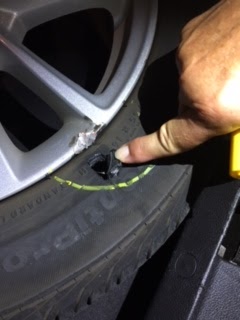 What does that image suggest to you?

Nancy shook the tire. We heard no noise and no bullet fell out, but the hole was consistent with a gun shot. Although, it also might have been caused by my hitting some rebar in the road. Or, another rental car associate suggested, it looked as if something inside the tire might have exploded, bursting the tire and denting the rim.

Meanwhile, back to my bestseller. My friend Phil gave me his list of potential suspects who could be “aiming” for me, including someone who might have made a ghostly appearance. Now, to put it all together in a plausible story!

Anyway, that’s how I began what became a very happy vacation, with an experience that has stimulated my writing brain and, with tremendous luck, could be a bestseller. Remember, you heard it here first!

I've never been shot at, Paula, if that's what you mean! Wow. I'm sure this will make it into one of your stories in one way or another. You may have dodged a bullet, but you've had a great tidbit of story research dropped in your lap. Or in your tire, as the case may be!

Annette, I hope there is another explanation for me, too. But, you're right. There's a story in the experience.

When it rained in Atlanta, all the sharp metal debris washed into the street in front of my house. I had a flat tire every six months, the result of roofing nails, push pins in the sidewall (fatal), and metal scraps. But never a bullet.

My car was "egged" and the windows smashed. But never shot at.

I've had tree toads, bats, and birds in the house, and a yellow jacket nest in the wall worthy of a Hitchcock movie ("The Bees"). But never a bullet hole in a window or wall.

Looking forward to what happens next.

I don't suppose you checked the later area newspapers for snipers shooting at random? What a world we live in where that is a real possibility! Glad you weren't hurt.

You too? I was assigned a rental car with a hole in the sidewall that allowed part of the innertube to stick out like a balloon. If it had popped while I was driving at high speed....? WWK writers, be very careful.

I used to teach in a high-crime area of Baltimore. Many of the people with whom I worked had their cars stolen or vandalized.

My car was immune to theft. To begin with, it was an ancient Toyota Tercel, the likes of which no self-respecting car thief would be caught dead driving. And it had a standard transmission, which very few of today's casual car thieves can drive. The ones who can are looking for luxury sports cars, not underpowered putt-putts.

The body wasn't exactly pristine, and if it was ever vandalized, I didn't notice. I did one time come out to find a flat tire, and it is quite possible that it had been shot--we had heard what might have been gunfire earlier in the day (not a hugely unusual occurrence.)

Wow! What an experience, Paula. Lucky you weren't on the interstate. One evening, my husband called me to say that our car had either been towed or stolen. My three-year-old who was on the extension said, "You are in big TROUBLE." The car had been stolen and my husband reported it. About midnight we received a call saying that it had been found in adjoining Maryland left on the side of the road. Apparently, someone wanted a ride home and didn't want to take the Metro. We had a smashed window, and a messed up ignition. The thing my husband was most upset about was the thief stole his prized duffle coat from the backseat.

Margaret, I've dealt with street debris, too. It's so frustrating to pick up nails in tires from a construction site. Dealing with the egging, shattered windows, and critters sounds formidable!

Susan, I didn't. I'll have to check the local media to see if anything similar was reported.

Warren, we need to look out for each other!

Kathleen, I admire so much the work you did. Once, when I was serving as a guardian ad litem, another lawyer working on the case insisted on driving me to the neighborhood to conduct interviews because he had a car that "could withstand damage."

Grace, what a nerve racking ordeal. I'm glad the car was found, but sorry about the lost coat.

I think I'd be awfully terrified after the act, to think that someone had shot at me! You could have been hit. Glad it turned out OK!