An Interview with Marilyn Levinson (Allison Brook) by E. B. Davis


Librarian Carrie Singleton is building a haven, but one of her neighbors is misbehavin'. Can resident spirit Evelyn help Carrie catch the culprit who made her a ghost?

In winter, the Haunted Library is a refuge for homeless townspeople. When a group purchases a vacant house to establish a daytime haven for the homeless, Carrie offers the library as a meeting place for the Haven House committee, but quickly learns that it may be used for illegal activities.

As the new Sunshine Delegate, Carrie heads to the hospital to visit her cantankerous colleague, Dorothy, who had fallen outside the local supermarket. She tells Carrie that her husband tried to kill her--and that he murdered her Aunt Evelyn, the library's resident ghost, six years earlier.

And then Dorothy is murdered--run off the road as soon as she returns to work. Evelyn implores Carrie to find her niece's killer, but that's no easy task: Dorothy had made a hobby of blackmailing her neighbors and colleagues. Carrie, Evelyn, and Smoky Joe the cat are on the case, but are the library cards stacked against them?
Amazon.com 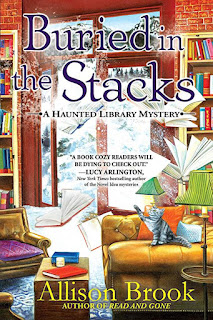 Most of you know that WWK’s Marilyn Levinson writes under the name Allison Brook. Buried in the Stacks is the third in her Haunted Library mystery series, which was released by Crooked Lane Books yesterday.

I interviewed Marilyn about the first book in this series, Death Overdue, in 2017. I’m happy she joined WWK this year and wanted to interview her about Buried in the Stacks. Feel free to say hello and ask questions of Marilyn about her series using the comments link below.

Hello, Elaine! I'm happy to be part of Writers Who Kill and to be interviewed by you once again.

The homeless have taken to spending time in the library, especially since the onset of winter. Does this happen at all libraries?

Yes, very often when the weather turns cold. Many homeless seek out comfortable places like the library where they can spend their days until it's time to return to their shelter for dinner and to sleep.

Sally, Carrie’s boss, appoints her the new Sunshine Delegate, which entails sending cards or flowers to ill library staff or those who have a death in the family. When odious Dorothy ends up in the hospital after a fall on black ice, why does Carrie decide to visit her?

Sally suggests that Carrie visit Dorothy in the hospital. Carrie knows that this is more than a request. She also does it for Evelyn Havers' sake. Evelyn, the library ghost, is very fond of her niece Dorothy, despite her unpleasant disposition.

Doris and Henry Maris are middle-class but are now homeless. How does this happen?

Henry is becoming senile and made several bad decisions that ruined their business. The Marises eventually lose their store and their home. They go to live with their son, but he, too, loses his home when he and his wife separate.

Dylan's original plan was to set up his investigator's office in Clover Ridge. When his boss Mac invites Dylan to become a partner, they both decide that New Haven would be a better locale for the new office as it's closer to Manhattan. Carrie is upset because this means that Dylan will be working half an hour away instead of in Clover Ridge. 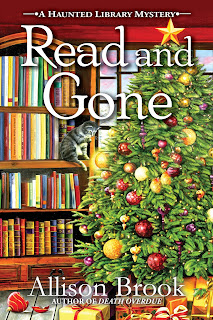 Dorothy is convinced mild-mannered Fred, her husband, is not only responsible for her injury, but also for her Aunty Evelyn’s death. Why would she think that?

Someone knocks Dorothy down. Fred is the first person she sees after being out cold for a minute or two. Seeing Fred triggers the memory of her Aunt Evelyn's death years ago when Evelyn died as the result of a fall on ice. That same night, Dorothy suddenly remembers, Fred came home late. In her confused state, she thinks Fred knocked her down as well as Evelyn, who died as a result of her fall.

Ernie Pfeiffer is a crook who swindled Evelyn and her husband. Why would Fred want to invest with him?

Ernie swears that this investment is on the up-and-up. Fred is naïve and believes him. Fred wants to believe it's true because of the promise of big returns on his investment

Is Carrie obsessed with eating avocados?

Like her author, Carrie eats avocados often. She likes the way they taste and knows that they are healthy.

Although Evelyn is a ghost, Carrie learns she hasn’t acted in life or death angelically. What brought Carrie to that conclusion?

One life lesson that Carrie learns in Buried In The Stacks is that everyone has his or her dark side and is capable of spiteful, dishonorable behavior. Before Sally became the library's director, Evelyn helped her predecessor with financial records, etc. Sally refused Evelyn's help in a tactless manner and the two women clashed. Carrie realizes that Evelyn encouraged her to take the head of programs and events position, not because she thought she'd be great at the job, but in hope that she'd be a thorn in Sally's paw. Also, Evelyn put salt in the grumpy computer librarian's coffee when he was less than civil to her.
Most importantly, Evelyn holds back important information regarding investigations if there's a chance that it will make her nieces and nephew look bad.

Carrie suffers from illogical thinking. “…if I couldn’t convince her to tell me the truth, I should have told John what she’d said in the hospital. Then it would have been John’s fault that she was killed and not mine.” (Kindle Loc. 1130) Why does Carrie think John or she were responsible for Dorothy’s death?

Carrie is suffering survivor's guilt and feeling somewhat responsible for not preventing Dorothy's death. If only she'd told John that Dorothy suspected that her husband had tried to murder her! Then she'd no longer be responsible because the problem would be in the hands of the police. And then if Dorothy died, according to her illogical thinking, John would have been responsible for Dorothy's death.

Evelyn fears she exacerbated the rivalry Dorothy had with her younger sister and brother by bequeathing her estate to Dorothy. Why did Evelyn make Dorothy her sole heir?

Dorothy's brother and sister kept on hitting Evelyn up for small loans that they had no intention of repaying. Evelyn got tired of this and decided to leave all of her money (not very much, after losing most of it to one of Ernie Pfeiffer's schemes) to Dorothy, who was her favorite.

Why does Carrie have great empathy for Evelyn even if she doesn’t always reveal everything she knows to Carrie?

Carrie is very fond of Evelyn. She knows that she holds back information when it might implicate one of her nieces or nephew.

Carrie thinks, “…how sad it was that we weren’t able to choose the people we love.” (Kindle Loc. 1617) Is that true? Don’t we have a choice?

Ah, books can and have been written about this subject. I think it's true that we can't choose the people we love. Sometimes our choices are disasters. Evelyn loves Dorothy and makes excuses for the bad things she does. As for the question—do we have a choice? It's not possible to "choose" a feeling. Only our ability to act on it. 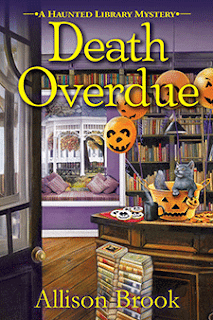 Gillian has lousy taste in men. Will she ever wise up?

Let's hope. She falls for men who are good-looking and forgets to look for indications that will reveal character. Carrie meets a nice young man in the fourth book of the series. In book five, she considers introducing him to Gillian.

When Gillian tells Carrie Haven House will be used after hours for illegal activities, Carrie gets depressed turning it into self-doubt. After her upbringing, is she still idealistic?

Carrie is still idealistic. She joins the group that is bringing Haven Home to the homeless population and is disgusted when she learns it's a front for a group of people intent on making money. She's also an activist and helps devise a solution for the future of Haven House.

Are all families dysfunctional?

More books could be written about this. <g>  I wouldn't go so far as to say all families are dysfunctional, but it's my experience that people have many sides to them. People have quirks, bad habits and worse that impact their loved ones.

Who is Ken Talbot and how does Carrie know him?

Carrie meets Ken Talbot, a lawyer, in Death Overdue, the first book in the Haunted Library mystery series when Ken accompanies members of the Foster family to the library to hear retired Detective Al Buckley talk about his newly discovered evidence concerning the murder of Laura Foster fifteen years earlier. Ken and Carrie forge a friendship and she occasionally calls on
him for help regarding legal matters.

Carrie has complicated relationships with her parents. Although her father was a thief, she has a better relationship with him than with her mother. Why?

Carrie always adored her father and was very hurt when Jim spent periods of time away from the family, even when he wasn't behind bars. Jim shows up suddenly in Read and Gone, asking Carrie to help him out with a "little problem" that she rightfully refuses to touch. But when he's accused of murder, she staunchly defends him though she refuses to call him "dad." Jim loves Carrie and proves it time after time until she sees that it's true. He even gives up his life of crime.
Carrie's mother is not very maternal. She resents having been thrust into the position of a single parent. She's self-absorbed, and critical rather than supportive of Carrie. When Carrie was at her lowest point and asked to stay with her mother and her husband, she was refused.

What’s next for Carrie?

In Checked Out For Murder, Carrie's mother arrives in Clover Ridge with her husband and a movie crew to film a romantic comedy. Meanwhile, Carrie makes a new friend who, so Evelyn tells her, used to live in Clover Ridge until her father was murdered twenty years ago. More murders, more complications, more fun! 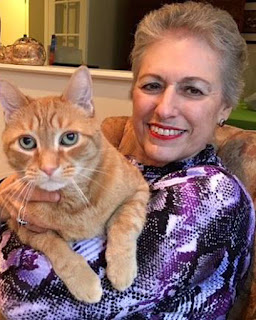 What a wonderful series. Is it hard to write a ghost, Marilyn? There abilities can make them all-knowing in the mystery world. How do you keep them from becoming a know it all and hijacking the plot?

I haven't read this one yet, but I've enjoyed the others, and I'm looking forward to this one, too.

Congratulations on your latest! Looking forward to reading it.

Excellent interview Marilyn and Elaine. Congratulations, Marilyn on the release of another book in your series.

First of all, a big thank you to Elaine for a wonderful interview as always.

Kait, thanks for your kind words. My ghost often holds back information as well as shares it with Carrie because she hates to admit that her niece, the nasty Dorothy, and well as Dorothy's siblings, might have committed crimes.

KM, Margaret and Grace, thanks so much for your support!

Big congratulations on your latest release, Marilyn! Can't wait to read it. You know how I love libraries.

Wonderful read, Marilyn. Thanks for the interview. I'll be looking for the next book in your series. Did I mention I love supernatural mystery?

Thanks, Shari! I do know how you love libraries.

Elaine, So glad you enjoyed BURIED IN THE STACKS. I didn't realize you love supernatural mystery. Well, they're fun to write as well.

Thanks for sharing with WWK