My Summer Vacation with President Obama by Carla Damron

LL Bean’s is a mammoth store in Freeport, Maine where one can buy boots, tents, clothes, sleeping bags, dog beds, and tiny President Obama finger puppets. This last item came as a surprise to me but there he was, peeking over the top of a barrel in the LL Bean’s coffee shop.

He seemed to want me to buy him, so I did.

He had a fine time in the first house we rented in Casco, Maine. He doesn’t like to kayak, but enjoyed hanging out on the porch watching the campers from across the lake learn how to turn over sail boats. He did NOT enjoy the staticky taped bugle call that woke both of us every morning at the ungodly hour of eight. He was also quite enamored with a giant inflated rainbow unicorn a few houses down, but I refused to steal it for him.

Since I didn’t have my usual editors with me (cats Scout and Fenway), Obama gave it a try. FYI, this guy is smart, and not shy with his critiques. “Another adverb Carla? Are you KIDDING me?” 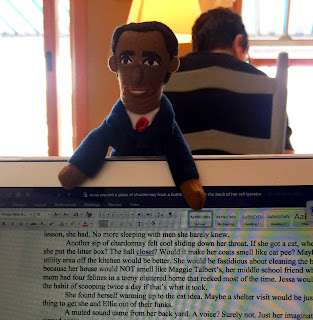 His favorite part of that week was the excursion to Campobello in New Brunswick, Canada, where Franklyn Delano Roosevelt and his family often vacationed (and where his first symptoms of polio began manifesting). Campobello is an international park, sponsored by both the US and Canada, and we had to go through a checkpoint to enter. Because Obama didn’t have his passport—it was probably with his birth certificate back home—I kept him hidden in my purse.

He insisted that I take his photo beside the side-by-side American and Canadian flags, snarkily commenting that he wasn’t sure how long this friendship would last. Forever, I whispered, because that’s the hope I cling to. 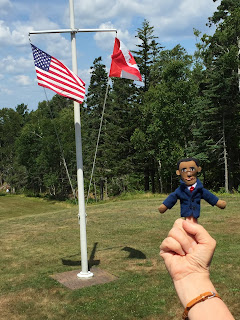 We ate at a seaside café and, because it was Canada, sampled the food oddity called “Poutine” (for you southerners, and foreigners, and people who know better than to put bizarre food in your mouth, poutine is French fries, with cheese curds, and gravy.) “Who even thought of this?” Obama asked, though honestly, it didn’t taste as bad as I expected. 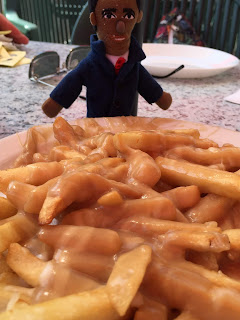 During our second week, we moved to a lovely pine cabin in Orland, Maine, closer to Acadia park. We took three different excursions into the park, and it was then that a different side of President Obama emerged. 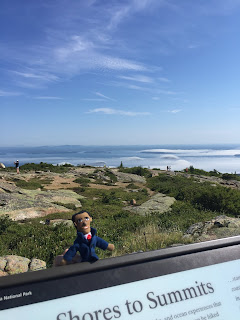 It’s probably my fault. I enjoyed taking his photograph, and people commented about how dapper he looks, even without any legs. President Obama decided ALL the photos needed him. He became the most obnoxious, persistent photo-bomber I’ve ever known. Here’s a perfectly lovely shot of Schoodic Point. He had to hurry to get in this one. 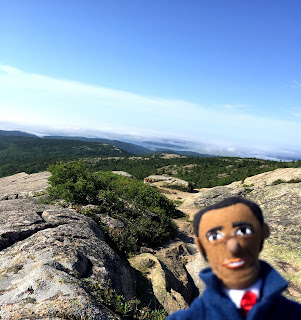 And Thuya Gardens? The flowers were brilliant and lush, and I wanted to capture a hummingbird or bee beside them, but no. I got this guy. 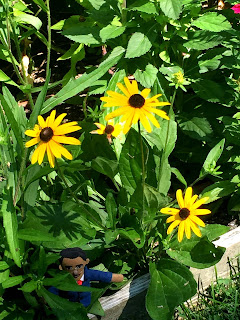 Here he is on Cadillac Mountain at the marker designating the highest point on the Eastern Seaboard. He tried to claim he hiked it, but A) we rode up in a car and B) he HAS NO LEGS. 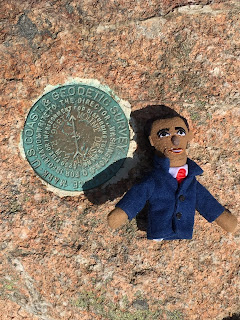 It’s my fault, I know. I created this monster. And this coming weekend, I return to New England to attend a Writing Residency at the Vermont College of Fine Arts. President Obama insists that he’s coming along.

I’m scared to think what he might get us into.

My, Carla, you do travel with some heady company! What an adorable post. It looks like you had a great vacation. What's next for you and Mr. Obama?

Kait, we leave for Vermont for a writing residency on Saturday! He's excited!

Happy traveling, Carla. Looks like you have a fun companion.

Have a great writing residency in Vermont. I hope it's cooler than South Carolina.

Have a great trip to Vermont, fortunately, it doesn't look as though the former Pres will be a suitcase hog with his wardrobe!

I love this, Carla. My Washington State sister sent all her siblings a wonderful large book full of photographs of him. I ate poutine in Canada, too. It was good. I've also been at the top of Cadillac Mountain. What a view from there. Enjoy the rest of your time in New England. I don't live there, but I've traveled there more than once and enjoyed it every time I've gone.

Cannot stop laughing! What heady company!
I hear he's an excellent writer, so I'm sure he'll enjoy the residency in Vermont. You may have to keep an eye on him, though, so he doesn't hog the spotlight!

Thanks, y'all. Hopefully it will be a little cooler in Vermont, because Pres. Obama only has that one outfit.