An Interview with Dianne Freeman by E. B. Davis

Frances Wynn, the American-born Countess of Harleigh, enjoys more freedom as a widow than she did as a wife. After an obligatory year spent mourning her philandering husband, Reggie, she puts aside her drab black gowns, leaving the countryside and her money-grubbing in-laws behind. With her young daughter in tow, Frances rents a home in Belgravia and prepares to welcome her sister, Lily, arriving from New York—for her first London season.

No sooner has Frances begun her new life than the ghosts of her old one make an unwelcome appearance. The Metropolitan police receive an anonymous letter implicating Frances in her husband’s death. Frances assures Inspector Delaney of her innocence, but she’s also keen to keep him from learning the scandalous circumstances of Reggie’s demise. As fate would have it, her dashing new neighbor, George Hazelton, is one of only two other people aware of the full story.

While busy with social engagements on Lily’s behalf, and worrying if Reggie really was murdered, Frances learns of mysterious burglaries plaguing London’s elite. The investigation brings death to her doorstep, and Frances rallies her wits, a circle of gossips, and the ever-chivalrous Mr. Hazelton to uncover the truth. A killer is in their midst, perhaps even among her sister’s suitors. And Frances must unmask the villain before Lily’s season—and their lives—come to a most unseemly end . . .
Amazon.com 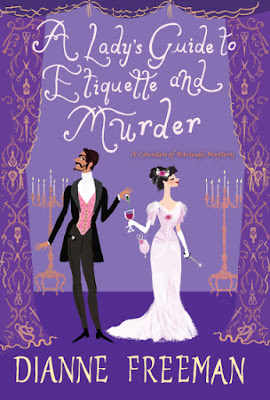 Dianne Freeman’s debut novel, A Lady’s Guide to Etiquette and Murder, caught my attention from the beginning. Her main character, Frances Wynn, who, in the first paragraph, compares her marriage to mourning, evoked my sympathy.

Sometimes it’s hard for me to read stories set during the Victorian era because women so often are treated as chattel. But even though Frances’s mother traded her daughter and money for an English-title marriage, Frances doesn’t act like a victim and that may be why, after her husband is dead more than a year, she’s suspected in his murder. Murder? She didn’t even know he’d been murdered.

With a little help from her friends, Frances conquers all.

Did American gentry often buy titles for their daughters by marrying them off to titled foreigners with a large monetary payment made to the husband?

During the last quarter of the 19th century and the first few years of the 20th, there were enough transatlantic marriages between American heiresses and cash-strapped British peers to consider it a phenomenon. The brides came from some of the wealthiest nouveau riche families who didn’t have the status to break into New York society. An aristocratic son-in-law could provide enough status to raise the family’s social standing on both sides of the Atlantic. But aristocrats don’t come cheap. When Anita Murphy of San Francisco married Sir Charles Michael Wolseley, 9th Baronet in 1883, it’s reported her father provided a dowry of two million dollars. But when May Goelet became the Duchess of Roxburgh in 1903, the price of the title was two million pounds! At that time a pound was worth about five U.S. dollars.

Was the story set during the end of the Victorian era?

Yes, the Victorian era ended in January of 1901 with Queen Victoria’s death.

Was the mourning period one year? During that time, did they not have company or callers?

By this point in the Victorian era people were becoming impatient with their queen’s constant seclusion while she mourned her husband’s death. This could be why mourning practices began to relax and strict observance became a matter of choice, particularly if the mourner was young. For a spouse, however, a year of mourning was considered the minimum. The mourner could still pay and receive calls, but it was not acceptable to attend large entertainments or wear bright colors.

You mentioned Frances’s sister-in-law, power/money hungry Delia, wasn’t wealthy enough to marry the oldest, titled son—so this was the custom—not just something tacky Americans did?

Britain’s primogeniture laws were still in place in 1899 so the eldest son inherited not only the title but any property and wealth that went with it. He also inherited the upkeep of any property, which could be extensive and expensive, and he might be expected to provide a living for various family members. If you are a member of that family and you hope to receive an allowance of some sort, you want the heir to find the wealthiest bride he can.

Why didn’t Frances think about returning to the US when she became a widow? Her entire family was there.

Frances’ life to this point revolved around duty—first to her mother, then her husband, and finally her in-laws. If she returned to the states, she’d be back under her mother’s rule and she didn’t relish the prospect of living out that cycle again. If there was a chance she could make it on her own, she wanted to give it a go.

Luckily, Frances’s father set up a household account for her exclusive use to help raise daughter, Rose. Was he progressive or did he have reservations about Reggie?

Mr. Price was not all that progressive. The property laws had changed in the 1880s and married women did have the right to hold property in their own names. However, this was far too progressive for the Wynn family, who were used to the head of the family controlling all the funds. When the families started negotiating marriage settlements, he knew he’d better establish an account solely for Frances.

Reggie’s death occurred during their hosting a house party in which bed-hopping was one of the primary entertainments. If adultery was common, why isn’t it more accepted? One married for money, not love.

This is a little tricky. Aristocrats tended to follow the example of their monarch, but this royal family set two opposite examples for how one should behave. Queen Victoria was all about family and propriety while her son, the Prince of Wales, was something of a wild child. Because he was the royal out mixing in society, his example was what more people followed—it was also much more fun. But since they still wanted to please the queen, outwardly they were prim and proper. Cheating on one’s spouse was accepted, but it should never become public knowledge. This is what makes the Victorian era so interesting; everyone is hiding something.

Frances seems philosophical about her marriage, but not about her money or her freedom. Does the lawsuit brought about by brother-in-law Graham have any merit?

The lawsuit has no merit, but because it must be answered, and her account is frozen, it becomes a nuisance. Graham hopes for a settlement from Frances. He’ll drop the suit and Frances can access her funds again.

Although Frances must tighten her budget, she still has six people working in her employ even without a butler or footmen. How can she afford them?

Frances is a creature of her environment. She’s never done without servants and definitely considers them a necessity. Fortunately for her, service does not pay well. Frances will spend about 125 pounds per year for her entire staff. That’s about 20 – 25% of what she can expect to earn in interest.

Fiona Nash, Frances’s English best friend, has a brother, George Hazelton, who turns out to be Frances’s new next-door neighbor. Why does she seem so reluctant to befriend him?

Pure embarrassment? When her husband died, Frances had to ask George to render a service that was unseemly at best. She would have preferred never to lay eyes on him again.

What does George Hazelton do for a living?

He worked as an assistant to the Home Secretary, H.H. Asquith. It’s similar to what we would call Homeland Security. What he does now, is a bit of a secret.

I loved Frances’s brandy-imbibing Aunt Hetty? Please describe her for our readers.

Aunt Hetty is one of my favorite characters. She’s Frances’ aunt on her father’s side and knows a good business deal when she sees one. She married the love of her life, who passed away from influenza far too young. After that she moved in with Frances’ family and became a loving fixture in her life. Hetty is fifty years old, has her own income, and does whatever she wants.

Frances’s sterling character shines through when she returns a stolen bracelet that was planted on her to Reggie’s last lover, Alicia. Honesty really is the best policy and the best defense, too, isn’t it? Why?

Frances would never consider keeping someone else’s property, but in this case, she doesn’t want to be caught with it either. Someone might think she’s the mysterious burglar.

Your plot was complex combining murder, marriage, courtship, robbery, trust, distrust, and friendship. Are you a plotter or a pantser?

I’m a pantser turned plotter. The first draft of this book was all pantser—then I found all the plot holes! I belatedly wrote a scene-by-scene outline before revising, and I’ve been outlining ever since.

You leave Frances contemplating going into the sponsorship of other wealthy young women who want to experience the debutante season in London. Is this why you titled your book as such?

Frances suffered through her mother’s version of finishing school, so Frances’ manners and her understanding of what is and isn’t done in society is second to none. If there were a guide to etiquette, Frances could write it. Her sister, Lily balked at this training and as a result, needed help in navigating the social world. Their roles as sponsor and debutante helped to create the title.

What’s next for Frances?

Frances will have another chance to investigate when an acquaintance is found murdered in her own home. She can’t image who would want to harm the poor dear until she learns the woman had countless notes hidden away in her home, detailing the private indiscretions of society’s elite. Now Frances has to wonder who wouldn’t kill her to keep their secrets safe? A Lady’s Guide to Gossip and Murder will be out in June of 2019. 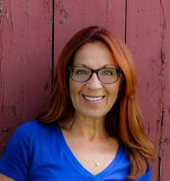 The Victorian era is so delightfully layered, it's one of my favorite fictional haunts. Frances sounds like just my kind of gal. Did you base her on anyone? There were so many intriguing role models.

For those of us who love mysteries set in Victorian England, this sounds like a winner.

I loved this book and am excited it's the start of a new series. The characters are fun and all the Victorian era social antics are a laugh. Thanks for the interview, Dianne!

Downton Abbey's Cora was from Cincinnati and made the trip to England to find a titled husband. For this reason, the Taft Museum in Cincinnati hosted the touring Downton costume exhibit a few years ago.

I loved the book and cannot wait for the second in the series. Congratulations, Dianne!

Great comment that everyone has secrets. Maybe that's why the Victorian era attracts so many writers.

It doesn't look like I can reply individually, so I'll post a new comment.
To Kait, I didn't base Frances on anyone in particular, she's a mixture of many of the American heiresses of the time.

To Margaret Turkevich, I wouldn't be surprised if Cora was based on Helena Zimmerman, an heiress from Cincinnati who became the Duchess of Manchester when she married the 9th Duke in 1900. Her marriage did not go as smoothly as Cora's either. Her husband loved women and gambling. Helena's father took care that his will designated his fortune went to her and not a penny to the duke.

E.B.Davis, Thank you so much for letting me share Frances' world with your readers!