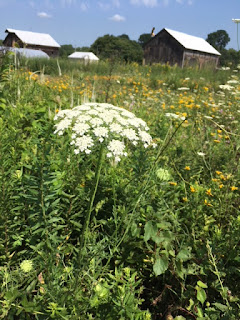 Summer in Cincinnati represents weeks of heat and humidity under a blazing midwestern sun, punctuated by violent thunderstorms. And this year, a bumper crop of chigger mites.
Tired of spending my days draped over the air conditioning vent, when I discovered that the Shaker Trace Seed Nursery, part of the Hamilton County Parks system, would hold their annual open house on August fourth, I was up for the adventure. Coated with bug spray, sunscreen, and armed with water bottles and sunhats, we headed for the Miami Whitewater Forest near the Indiana line. 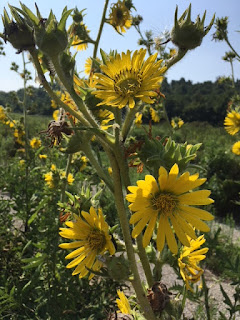 Once upon a time, prairie wildflowers grew in southern Ohio meadows and forests. In 1992, the Hamilton County Parks Department purchased a six-hundred-acre farm in the large Miami Whitewater Forest to use as a propagation site for the native flower and grass genotypes that used to grow wild in the area. Indigenous bird species—lark sparrows, marsh hawks, and short-eared owls—would benefit, as would bees and butterflies. 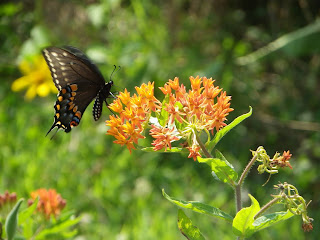 In anticipation of the seed farm, in the fall of 1991, volunteers spread over a hundred-mile radius gathered seeds from native species. Shaker Trace Nursery opened the following spring, when the first 43,000 seedlings, which had been propagated involunteer greenhouses all over the county, were hand-planted. Those original plants still produce seeds, which are harvested every year. 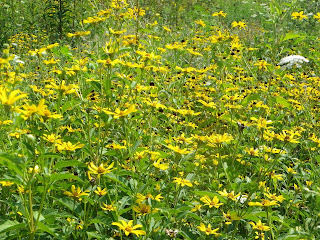 The nursery relies on a large number of volunteers. Seeds of more than two hundred plants are sown into flats in the late fall and are periodically put outside to “stratify” (freeze and thaw) as they would in the wild. The sprouts are raised in a greenhouse all winter and then in the spring, six to ten thousand seedlings are planted in the nursery’s prepared 140 beds. Volunteers keep the beds weeded all summer. Prairie flowers have deep root systems and no need for additional irrigation. In early fall, the flowers are cut, sorted and dried before the seeds are harvested in an old barn on the property. The harvested seeds are stored in a temperature and humidity-controlled environment, until they are dispersed as needed to the many parks in the Hamilton County system. The seeds for purple coneflowers, Joe Pye weed, compass plants, varieties of milkweed, liatris, ironweed and many other plants are genetically acclimated to the Hamilton County climate and yellow clay soil. 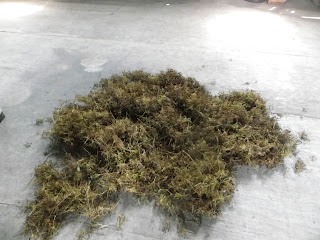 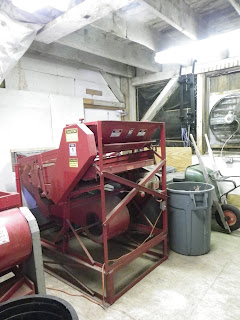 I have an Eastern Prickly Pear Cactus in an overgrown perennial bed in my yard. My neighbors periodically ask for the “satellite” offshoots. I was astonished to learn that the cactus is native to this area. It is propagated by seeds and cuttings. I weed around it and otherwise keep at a respectful distance. 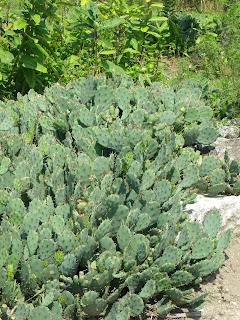 In addition to beds of prairie and woodland wildflowers, Shaker Trace has fish ponds lined with bentonite, a natural clay. The farm raises hybrid bluegills, which are a cross between green sunfish and northern bluegills, from fingerlings, and then harvest the half-pound fish for children’s activities in a nearby lake. We watched the water churn as the bluegills swarmed for food pellets. They are bred to bite anything. 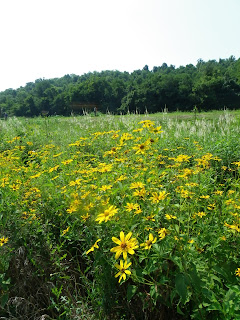 The red-tailed hawks soared overhead and barn swallows flitted in and out of the barns. Bees and butterflies swarmed the flower beds. The disease-resistant wildflower meadows in county parks are successful in choking out invasive species. I wish more residential gardens had Queen Anne’s lace, goldenrod, and milkweed. In my gardens, I keep “volunteers” until I can identify them. Ragweed doesn’t make the cut. Milkweed is toxic to dogs, so I moved it out of the backyard. 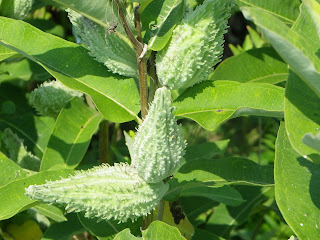 Readers and writers, have you visited a wildflower meadow or do you have wildflowers in your garden? 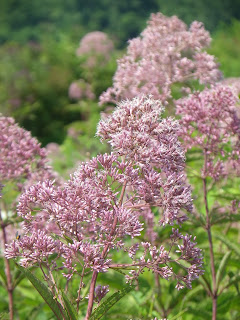 Joe Pye Weed
Posted by Margaret S. Hamilton at 12:00 AM

Thanks, Margaret. That was so interesting. I enjoy driving down some highways where wildflowers have been planted in the medium strip.

I've been to a place called Wildflower Farm near Fredricksburg, Texas. All along our highways in the spring are wildflowers.

What lovely photos. The seed sorter does look rather intimidating though. Something about it reminds me of a medieval torture instrument!

Most of our grassy highway medians are marked as wildflower medians and it is delightful to see them in bloom. A bit sad when they are cut, but that is how they are reseeded after all. I do find it strange to walk into local garden centers and see vincas for sale or lantana. They can be pricey and if you have some patience, the birds will take care of the planting for you in this part of Florida.

Grace, I love the highway wildflower strips too.

Warren, thanks. It was a treat to visit the seed farm.

Vicki, I hope to visit Texas during wildflower season.

Kait, I have some terrific "volunteers" in my garden, both perennials and bushes and trees.

I lived in the Cincinnati are for fifteen years and never knew.

We do have a wildflower garden over the septic field at our place in Michigan's Upper Peninsula. We created it by "liberating" native plants from the woods. As happens with wildflower meadows, after thirteen years the tall plants had taken over shadowing out the shorter plants like devil's paintbrush. This year I mowed most of it down, leaving only the lupine standing.

Jim, mowing sounds appropriate for long term maintenance. Thanks to my neighborhood yard police, I had pull up my Queen Anne's Lace and goldenrod. One gardener's wildflowers are another's weeds.

The seed farm keeps a low profile. They publicized their annual open house on the local NPR station. The adjoining Miami Whitewater Forest has excellent birding, particularly water birds. Keep it in mind for your next visit.

We encourage native species on our seven acres, but find it a never-ending battle, especially with vines. I mow some of the area once a year, aiming at getting it done before the devil's tail, an invasive vine that will take over everything, including climbing over the house, sets it rather lovely porcelain blue berries, which will help spread it all over, I think with the help of hungry birds.


I love the Queen Anne's lace and the goldenrod! Is there any way to have them added to "acceptable" plants in your neighborhood?

Kathleen, your devil's tail sounds like southern Kudzu, which is strong enough to crawl all over a wooden building and topple it.