When I signed the contract for my mystery series, one requirement from my editor for Book One jumped out at me: The body drop must happen by page 30.

Body drop? I was so new that I wasn’t exactly sure what that was. I mean, I could imagine – and I was right – but I had no idea that in mystery circles this was a “thing” and that it was expected to happen quickly. The body drop, the appearance of a mysteriously dead body, has also been a topic of discussion in the Guppy Chapter of Sisters in Crime.

People talk about formula when talking about mysteries, especially cozy mysteries. I happen to enjoy the formula, both as a reader and a writer. As a reader I enjoy it because I like to see how each writer makes the formula her or his own.  As a writer, I enjoy the challenge of taking that formula and seeing how I can put my own spin on it.

Considering the body drop got me thinking about Agatha Christie. 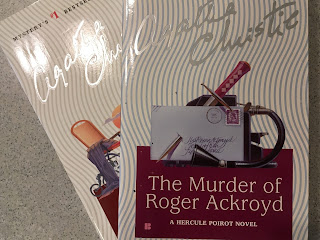 One of the things I enjoyed about Agatha’s work and that of other Golden Age writers was that part of the fun was guessing who the victim would be. The garrulous old army major? The businessman with a scheme for a flashy new motor car or a vague scientific invention? An exotic, most likely Russian, ballerina who may or may not be the love child of a financier and that milkmaid who once “did” for Miss Marple in St. Mary Mead?

Christie would introduce us to her cast of characters and give us time to observe them, like a bettor at the race track. We’d meet them and weigh the possibilities. Who would the victim be?

Once the body dropped – well past page thirty -  then we could dive into collecting the clues alongside the detective, watching the alibis unravel until the gathering in the library when all would be revealed. This set up also helped avoid the problem of the “mushy middle,” a slowing of pace and tension when no big dramatic events or reveals occur in the middle of a story.

I liked this set up, which, sadly, is not possible with a page 30 body drop.

I think Christie and the Golden Age authors were on to something. Giving the reader that first signpost to look for – who would be the victim? -- and then moving on to whodunnit created a very satisfactory pace and structure.

What a thought-provoking post! I've always claimed to like an early body drop, and that's how I write. I sometimes stop reading books because the mystery takes too long to develop for my tastes. But I've been watching reruns of Murder, She Wrote recently and, much like your Christie example, in some episodes the body drop doesn't happen until after all the characters are introduced. And yes, I find myself wondering who the victim will be although I don't think I consciously realized that until you brought it up. So why is a late body drop okay for some stories but not for others? I think the difference is in expectations. In Murder, She Wrote, I know a body drop is going to happen. And if I'm reading a book by an author I already know I enjoy, I'll continue on no matter when the body drop happens. But when I'm reading a book by an author I'm not very familiar with, nothing is guaranteed. So unless I find the story interesting enough without the promise of a future body drop, I'm liable to stop reading.

Shari – you could comply with the publisher’s desires and “drop” a second body later on that changes everything people thought they knew about the characters and who done it.

This cozy “requirement” doesn’t apply to the suspense/thrillers I write. Often the precipitating death occurs before I start the novel and the reader never sees the body. In Doubtful Relations, although people die, those deaths are not the crime driving the novel. In my current WIP, everyone finds out early on who the killer is, so it’s not a mystery, but suspense keeps building whether the killer will strike again (which is a subplot!)

Hi Marla, you make a good point about expectations and how, if we’re wrapped up in the story, those expectations are forgotten. If we’re in the hands of a good storyteller, we forget and forgive if they don’t follow the formula

Hi Jim, I enjoy your work because you have that blend of traditional mystery and thriller elements. And you’re right- a second body drop will always spice things up.

I like the second body drop concept. And major subplots.

I've done it differently in different books. In one, the body doesn't show up until page 30ish. In another, I had three bodies, supposedly unrelated, within the first few pages. I truly believe the body should drop when it makes the most sense for the story.

Often with really good mysteries I get so caught up in the plot and characters that I wouldn't mind if there was not a body drop at all.

Except for the tenth book I'm working on, I don't body drop until at least a fourth or a third of the way through the book. But then I often have two bodies found, too. In my latest which is covering the Opioid crises a young boy is found dead from both being hit on the head and shot up with heroin, that he didn't take. As for my reading of mysteries, it doesn't matter so much when the body is found as how the investigation goes, how many possible suspects there are and what clues or red herrings are dropped.

I just finished Kait Carson's first Catherine Swope mystery series, Zoned for Murder. and she has the body discovered by page 16. Lots of possible suspects and good characters. I really enjoyed the book and can't wait to read the 2nd in her series.

When I drafted my first manuscript, I wrote it with the mysteries that I read and enjoyed in mind. Like you, getting to know the characters and wondering who the victim would be and why the characters would have wanted to kill the victim. As a result, the body didn't drop (literally, since mine fell from a laundry chute) until page 60. I was advised that page 60 was far, far too late. So I gritted my teeth and cut so that it now appeared on page 29. Again I was told that was still too late. So now there was no wonder who the victim would be and it appeared on page 19. No time to introduce potential victims. I think it is a matter of expectations. We older readers who enjoyed the Golden Age of Detection were accustomed to a later arrival of the victim, and we were a little more patient. Readers now seem to want instant gratification--some blood thirsty readers out there.

If I'm enjoying a book, I don't care when the body drops. But I do realize that many avid mystery readers are looking for that early event so they and the author can get along with what they consider to be important--solving the mystery.


In my books, sometimes the body appears immediately, and sometimes later. I like to think that when it appears later, the entire story is building up to that point.


Part of your skill, Shari, is giving the publisher (and hence the reader) what he/she wants, and doing it in a way that holds the reader's interest. You do that very well.

Oh, strict formulas are so outdated. It's no fun to read or write the same story over and over. Formulas are little more than copy paste mechanisms--though, admittedly, ones that exist because they have been successful. I'd rather let the ones who created the formula run with it and do my own thing. It's not art if it's nor yours.

As Sarah says above, strict formulas are outdated. I'm finding more and more authors drop the body later and as long as the drop fits the story, it works well.