Digging Those Deadlines by Lisa Ciarfella 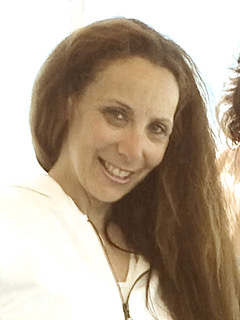 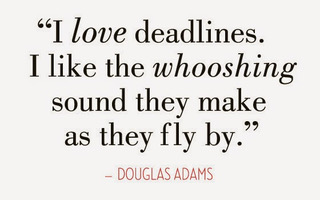 Everydayisspecialblogspot.com/2015-douglas-adams.html
Hey All,
Lisa Ciarfella here with a warm hello and a toast to my first Writers Who Kill Blogpost!

Humbled to be welcomed into the fray, I’m coming at ya’ll today on the topic of deadlines. And seeing as I missed mine here by nearly 24 hours, it’s a miracle you’re reading my post at all. That means my topic’s just about right. But like mom always says, if it were at all humanly possible I’d be late for my own funeral, so I guess it’s not that surprising. And like Douglas Adams infamous quote (right under my photo above), and author of “Hitchhiker’s Guide to the Galaxy,” I’d venture to guess I’m not alone!

Not sure how ya’ll handle deadlines. But being nearly two years out of grad school, the memories of those looming, logistically-impossible never-ending nightmarish academic deadlines, small and tall, still hang over my head like a bad hangover the day after a night full of fun. You know those kinds of nights. The ones you thought were fun, but the next morning says otherwise!

Quizzes, exams, finals, papers, projects, and those all-consuming heart-stopping thesis deadlines tend to beat lowly grad students into submission until they can no longer function in the real world without them. You learn to lean into it though, cranking out what you must to get the job done, as your Felix-the-cat wall clock ticks down the last precious few seconds.

So what happens if that persnickety professor says that thing is due Tuesday at midnight on the dot in her inbox? Well, at 11:59 pm you’re chugging your twelfth espresso and hitting the submit button on your laptop, praying to the campus Gods that your WIFI doesn’t decide to go Kapow! And if it does, there’s always the beg, borrow and plead your case ‘dog and pony’ show you can offer up. But it’s a crapshoot whether they’ll buy it or not. Either way, you either get the thing in on time, or suffer the consequences.

Out here in the real world, deadlines haven’t got much easier. I hoped they might, especially as a writer. But I’ve found there’s a difference between mandatory deadlines and self-imposed deadlines. Especially when it comes to blogging. Don’t know about ya’ll but running your own blog’s a lot harder than I thought.

I started mine on a wing and a prayer, throwing up a WordPress site not knowing the first thing about it. But coming up with thoughtful, well-considered, interesting and timely topics to blog about every week is no easy feat. Especially when you consider there’s no money in it and the bills keep piling up. But what makes it super tough, for me at least, is that no one’s laying out those deadlines anymore!

Tough as they were in school, not having ‘em at all seems even worse. When I first started blogging, I thought three times a week sounded grand. Quickly, that went down to two. Then one. And now, I get out my posts when I can, and only when I think I have something interesting to say. (Oh yeah, that’s the other thing I learned quick. Babble’s never good. No one wants to read babble.) But I digress. Case in point, staying on point!

My take-away here is that deadlines are tough, but they do give structure. Without ‘em my blog’s just “a blowing in the wind,” a mini skirt just a tad too short under the breeze kicking up on the block. There’s always something else that can seem more important, like taking out the garbage or walking the dog. And much as I want to write that next blog post, it can get kicked to the can without much doing. And that can could get kicked down the street and onto the next block easily unless I get tough on myself.

What I’m finding is that guest blogging is actually easier. At least that way I’ve got some accountability. May not be the fear of failing finals anymore, but it’s more than that now. It’s the fear of failing at this writing thing and having to barista forever that keeps me up nights. So here it is. Me getting tough. And with just a smidge under 24 hours over the mark!
And here’s to all the Writers Who Kill for rolling the dice and still putting me up!

Cheers all and stay tough!
Lisa

I'm in the midst of Deadline Madness right myself, so I understand completely.


I like deadlines that can be used as goals, not absolutes.

Hi Lisa, welcome to the blog. What a great take on deadlines and always remember - 42.

Hey, you made it. Better yet with something worth reading.

Deadlines? Structure? I'm with you - without the external deadlines, my structured existence fell away as self-imposed deadlines became harder to meet. I liked your example of your personal blog posts slipping from 3 to occasional. So true, but eventually, I guess we all need to create our own deadlines if we are going to succeed as writers.

Hi all and thanks sooo much for jumping in and leaving your thoughts! Deadlines make all us writers mad, to be sure! resonates hard!

Life is all about deadlines. Good reading. Thanks for putting this up Lisa.

Good piece, Lisa. And deadlines force us to stop procrastinating and get things done. In that sense they're a good thing.

Care to challenge yourself to a November 1st deadline?

Near to the Knuckle Publishing and the Blood Noir podcast are hosting an audio drama competition called Sounds of Crime & Horror.

Listen to this audio clip: http://gritfiction.co.uk/black-friday-competition/

Write a short story to complete it and submit. Word limit is 4k. Details are in the announcement at the beginning of the clip. We hope to see your entry.

Love this guest article. And this blog! I'm definitely coming back here with some writers to submit.