Learning the Tricks of Other People's Trades

Write what you know, they say. So I decided to write about a woman who inherits a gun shop that caters to Civil War reenactors. And I decided that her partner in both romance and crime solving should be a former SWAT sniper who lives in a Buckhead high-rise and drives a Ferrari.

In other words, things I know nothing about.

It might not have been the smartest decision writer-wise, but it did require me to get very good at research very quickly. And I discovered that unlike the research I accomplished using books and the internet, to truly understand my protagonists, I needed to get out of my office.

In other words, right out of my comfort zone and into the fire. 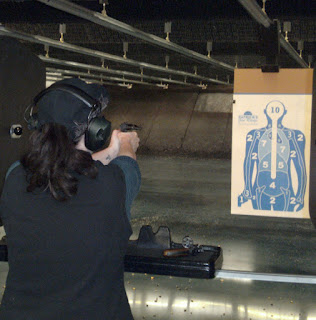 To write someone familiar with a variety of firearms, I had to get myself to the gun range. As it turns out, I’m a pretty good shot—I passed my basic handgun safety course with flying colors. My experience in the Firearms Training Simulator, however, was a different story. I signed up for a session through the Writers Police Academy, a three-day immersive experience at an actual police training facility. My instructor explained very well what was going to happen—the lights would dim, and a scenario would be projected on the screen in front of me. I would be playing the role of a police officer responding to the call, and my Bluetooth-rigged pneumatic firearm would track where I “shot.”

Simple enough, right? So I thought. Sixty seconds later, my trigger-happy, over-adrenalized self had shot up a virtual airport terminal trying to subdue one active shooter. I “killed” the bad guy…and a TSA agent, a businessman, and a honeymoon couple. I learned that this is typical, that people untrained in managing the endocrine overload of such a high-stress situation lose their targeting ability. Their hands shake, and their vision tunnels. It even happens to good shots like me, and it meant that in a real-world situation, I would have been a menace, not a hero. Being a “good guy with a gun” takes an immense amount of regular, hands-on training. I am grateful to the law enforcement officers and other professionals who take on that task.

I performed better in the Academy’s mock SWAT raid. My profile photo here at Writers Who Kill was taken right before my workshop on dynamic entries—that’s me over there on the left in my all-black running outfit and my bright orange plastic rifle. We learned how to clear rooms in a building using two-person teams, breaking off from the stack, working corner to corner to minimize blind spots. I was doing pretty well too…but then I turned my back on what I thought was a neutralized threat, and I ended up dead. Doornail dead.

(Side note: this is the incident that inspired the opening scene of Necessary Ends, my latest book in the Tai Randolph series—you can read that first chapter here).

In other workshops, I practiced proper handcuffing techniques, wore a fully tricked-out duty belt, and watched a fire and rescue team work a simulated car crash with multiple casualties. I learned about mantracking, underwater crime scene evidence recovery, and canine units. Not only have I come away smarter, I’ve developed a deep appreciation for the first responders whose job it is to run toward danger. I heard one police chief say of making such calls, “We’re meeting people on what is probably the worst day of their lives. But for us, it’s just another Wednesday.”

I remember this every time I sit down to the page, that one of our duties as mystery writers is to be true to the real world. It’s why we research, so that our fictional prose rings with authenticity. But our stories should also illuminate the real-life stories of the people who live those Wednesdays, in all their mundanity and horror and complexity. Our fiction may not always be factual, but it should always be true. And so…. back to the research I go.


*     *     *
Tina Whittle writes the Tai Randolph mysteries for Poisoned Pen Press. The sixth book in this Atlanta-based series—Necessary Ends—is scheduled for release April 3rd. Tina is a proud member of Sisters in Crime and serves as both a chapter officer and national board member. Visit her website to follow her on social media, sign up for her newsletter, or read additional scenes and short stories: www.tinawhittle.com.

WPA was the experience of a lifetime. Writers come away with a huge respect for first responders never look at their work in quite the same way again. I was lucky enough to be standing next to CJ Lyons at the multi-victim crash the year I attended. WOW a private master class.

It's so important that the writer's hard-earned knowledge provide the undercurrent of the story but not show on the page. You handle that well in your series, Tina.

I also went through the simulation training at the Writers Police Academy. I did die once – that tunnel vision thing, and I learned that disabling someone by shooting them in the leg was not proper police procedure. Anything other than aiming for center body mass showed my poor training.

I lucked out with my shoot/don't shoot decisions. Some are simply a matter of following procedure. Others, however, require borderline decisions. Those are tough, and I’m glad I only had to make them as part of a simulation.

I did the same yearly simulation training as the Blue Ash, Ohio police officers when I was enrolled in the Citizen's Police Academy. I had three options: talk down, use my taser, or shoot with my blue plastic hand gun.

I died twice, once in a movie theatre with a shooter emptying his semiautomatic weapon on anything that moved (I later learned that first responders would approach the theatre from two different sides), and sitting in the front seat of a patrol car next to a dumpster in a vacant lot. I learned that trained officers anticipated this scenario by shielding themselves behind an open car door.

It's intense, isn't it? All the adrenaline and none of the real life consequences. It certainly provides a perspective that you can't get shooting at paper targets. And a lot of respect for the women and men who have to make split second decisions and the importance of training them to do that properly.

I had a similar experience except that I was a truly lousy shot. If we are ever taken prisoner by kidnappers and I get a gun, I'm handing it to you.

I didn't get my name on the sign up sheet fast enough and lost that opportunity. Good you were faster than I was. You are inspiring, Tina. Can't wait to read your book!

The only time, and the last time I handled a gun when as a teenager, my brother and cousins gave me a shotgun to shoot. Ouch! My shoulder ached for days. End of shooting anything. I will enjoy reading your book, though.

Since I write cozy mysteries, I wasn't sure the Writer's Police Academy would help me. I try to avoid scenes that might include shoot-outs, etc. But I've heard so many good things about it that I may have to reconsider. Glad you got so much out of it.

Good for you (and all the other writers) who make a real effort to depict realistic scenes, not fantasy, in your work.

I come from a family with a number of police officers/first responders, and have seen just how agonizing the decisions they have to make in a split second can be. They all realize that, no matter how careful they are, they can always make a wrong decision, and would regret it for the rest of their lives.

My "baby brother" was just in the news in Suffolk County, NY, for entering a burning building with a fellow officer and an off-duty firefighter and rescuing an elderly woman before the fire engines arrived.

Wow, KM, that is some serious heroism. I'm glad people like your brother exist in the world.

Grace, I think Writer's Police Academy is a fantastic even regardless of what kind of mystery one rights -- it's there's a crime in the book, there's someone at WPA who can help you render it correctly, as well as whatever law enforcement response there would be. They are very patient with all the "what if?" scenarios that writers throw at them.

I hope I can see some of you at WPA in the future. And thanks to everyone for visiting and commenting (and for giving NECESSARY ENDS a read). You all are appreciated!