Leaving behind a failed career as a magazine editor and an embarrassing stint on a reality baking show, newly divorced lifestyle entrepreneur Hope Early thought things were finally on the upswing–until she comes face-to-face with a murderer . . .

Hope’s schedule is already jam packed with recipe testing and shameless plugs for her food blog as she rushes off to attend a spring garden tour in the charming town of Jefferson, Connecticut. Unfortunately, it isn’t the perfectly arranged potted plants that grab her attention–it’s the bloody body of reviled real estate agent Peaches McCoy . . .

One of the tour guests committed murder, and all eyes are on Hope’s younger sister, Claire Dixon–who, at best, saw Peaches as a professional rival. And suspicions really heat up when another murder occurs the following night. Now, with two messy murders shaking Jefferson and all evidence pointing to Claire, Hope must set aside her burgeoning brand to prove her sister’s innocence. But the closer she gets to the truth, the closer she gets to a killer intent on making sure her life goes permanently out of style . . .
http://debrasennefelder.com/work/
The Writers Who Kill blog started eight years ago. Our original intention was to blog about the craft of writing, our development as writers (many of whom were not yet published), and to promote not 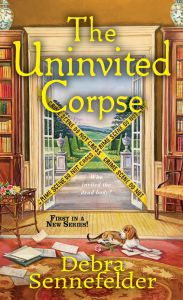 only our own works, but those of other up and coming writers. I hope we have fulfilled those goals, but every now and then a writer appears who provides the opportunity to showcase the writing/publishing process and fulfill the goals of the blog. This is the case of Debra Sennefelder, who recently joined WWK and whose debut book, The Uninvited Corpse, will be released on March 27th.

Debra’s main character, Hope Early, is a food blogger who works from her home. After a series of professional and personal failures, she moves from Manhattan to her small hometown in Connecticut. Unfortunately, she is constantly reminded of those days due to people recognizing her from a reality bake-off TV show, which she lost to another contestant. Clearly, her fifteen minutes of fame smacks now and then, but she’s also learned to use it to her advantage—when investigating.                                          E. B. Davis

How long did take you to write the rough draft and then revise the manuscript? I’m not sure of how long it took to write the first draft or how long the revisions took. During that time, I was working full-time so I was writing evenings and weekends. It was a full year between when I began writing The Uninvited Corpse and submitted it an agent for possible representation.

Did you work with a critique group? Was that a beneficial experience? Were they your beta readers or did you put it out to a larger group to obtain them? I work with a critique partner, author Ellie Ashe. We’ve been critiquing for several years, and she has been invaluable to me. Working with her has definitely made me a better writer.

How many queries did you submit before getting an agent? I was offered representation by the first agent I queried, and I accepted the offer. 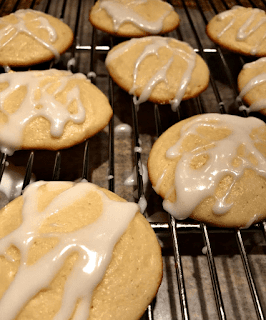 Were you involved in the cover art selection? I was asked to submit three to four ideas for the cover and the art department took it from there. I think they did a wonderful job.

Why did your main character, Hope Early, decide to move back to her Connecticut hometown, Jefferson? After her appearance on the reality baking show and the divorce, she had to make a decision about what to do next. The city kind of lost its luster for her and going back home to start the next chapter in her life seemed like the right thing to do.

Is there a National Chocolate Chip Cookie Day? Yes, there is. It’s a wonderful day! This year it’s on October 28th.

What is a keeping room?  They originated in colonial times. They were a multi-use room for attached to the kitchen which was usually the only room in the house with heat. The cooking, living and sometimes sleeping were done in that space. I think of them as early-concept great rooms that we love today in our homes and that’s the space in Hope’s house.

Although Hope grew up in Jefferson, she and her sister don’t seem particularly country oriented. Hope lived most of her adult life in NYC, but she has a barn, in which houses her brood of chickens. Why chickens? When I moved to Connecticut from New York City after I married, we raised ducks. I didn’t necessarily want fresh chicken eggs, but Hope wanted fresh eggs for her baking, and the chickens are great for insect control.

Hope grew up in Jefferson, and she’s known most of the characters since she was a child. That’s a good and bad thing. What’s with frenemy, Meg Griffith? She seems excessively mean? Hope and Meg have a lot of history.  Sometimes it’s hard to let go of the past. With Hope now living back in Jefferson, they’ll have time to work out their differences. 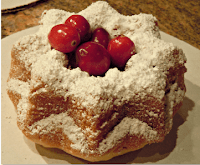 Jane Merrifield is a lovely character. Why did she stop writing mysteries? Oh, I’m so glad you enjoyed Jane. She’s so much fun to write. I know when I’m going to write a scene with Jane, I’m going to have a good time. Jane stopped writing when she married and began a family. The Merrifield family has a long history in Jefferson, and she took on many community roles. She just couldn’t do it all. But, maybe one day she’ll get back to writing.

Will possible beau Police Chief Ethan have competition from lawyer and former detective, Matthew? Maybe. Maybe not. I can’t give any spoilers.

What’s next for Hope? In book two, The Hidden Corpse, Hope is taking a food photography class with fellow bloggers and gets tangled up in a case involving a missing woman.

Debra -- Wishing you all the best on your debut novel and your series. Enjoy the moment.

Thank you, Jim! Very wise advice and I'm doing my best to enjoy all of this.

Thank you, Margaret. I hope you'll enjoy the book!

I wish you continuing success. Thanks for sharing with us.

Thank you, Warren! It was my pleasure.

Congratulations on getting your first book published, Debra. I've already written it down to order it.

Thank you, Gloria. I hope you'll enjoy the book.

Congratulations, Debra, on the publication of your book. It sounds like a lot of fun, and I look forward to reading it.

Sorry for not being here yesterday. More doctors appointments an hour away. I learned a lot reading your book and through your answers to my questions, Debra. Good luck with the series and thanks for the interview.