Today would have been my mother-in-law’s birthday. A dozen years ago, Nona entered hospice with Stage 4 ovarian cancer. During the long days and nights that followed, she and I talked, often about her children and grandchildren and her hopes and fears for their futures. She was fiercely devoted to her family and took great delight in their delight. When I joined the family, it took me a few years to realize that, to her, a Christmas list was not a wish list; it was a shopping list. She loved to give her children and grandchildren everything they wanted. Seriously. Everything.

One afternoon, she told me that though she had little interest in travel herself, she regretted that she'd never sent my husband to Australia, a place he'd wanted to visit since he was little. Caught off guard, I stammered, “Don’t worry. I’ll make sure he gets there. I promise.”

Which is how, in June, I found myself and my intense fear of flying on a 14-hour flight from Los Angeles to Brisbane. 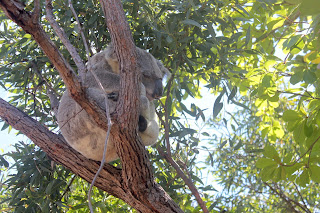 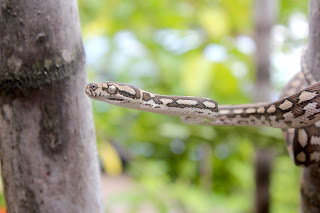 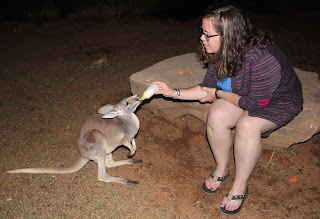 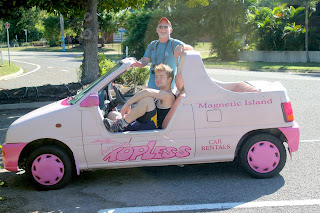 The promise was never far from my thoughts over the years, but 2016 saw a confluence of events that made the trip make sense: Our son graduated from high school and, a few weeks later, we celebrated our 25th wedding anniversary. If ever there were a year to take a big trip, this was it. And when we asked the boyo where he wanted to go, he chose Australia without hesitation.

The trip was everything we hoped for and more. We saw kangaroos, wallabies, a koala so close to the trail we could have touched it, crocodiles, emus, a dingo, numerous tropical birds, tree frogs, and a few species of snakes (though not as many as my husband, a biology teacher with a passion for reptiles, would have liked). John added 154 bird species to his life list.

We marveled at the giant pines and stinging trees in the Bunya Mountains; hiked the Art Gallery trail in Carnarvon Gorge to see the amazing Aboriginal stencil art on the gorge’s sandstone cliffs; drove 40 kilometers off our intended path to visit a place marked on the map as White Blow, which turned out to be a huge chunk of quartz sitting atop a hill (not, as we had speculated, some kind of drug thing); stayed with generous friends of friends on a 140,000-acre cattle station, where I had the privilege of giving a bottle to an orphaned joey in the temporary care of station owners Karen and Angus Emmott.


We snorkeled the Great Barrier Reef, drove a rented Barbie car around Magnetic Island, ate dinner at Sydney’s Opera House, cruised the Daintree River, and drove to the end of the road at Cape Tribulation (the end of our road— only four-wheel drive beyond the point at which we turned around). In all, we covered more than 4,000 kilometers in our rental SUV (a real car, not the Barbie car) and met and talked with dozens of interesting people during our three weeks in Australia.

Through it all, I kept thinking, “Is this real? Are we really here?” And then I’d look at the joy on John’s face and the wonder in my son’s eyes and think, “Yes, we really are here, and it is everything.”

Every night while we were there, I sat down and wrote about the day’s events. Preparing for this post, I re-read some of my entries, and I caught myself thinking, “Nona will be delighted when she hears about this.” She would have reveled in every story and every photo, and I’ve never been happier to keep a promise.

Posted by Julie Tollefson at 12:00 AM

What a great trip, Julie. One you’ll remember forever for the trip itself, sharing with family, and for keeping your promise.

And what a tease you are: 154 new bird species spotted and no pictures!

What a great post and super memories indeed. Very nice present to both your husband and your mother-in-law, keeping that promise. Wonderful. :-)

Creating memories for your family and honoring your late mother-in-law all in one trip! It sounds wonderful.

What a wonderful trip! I am sure Nona was smiling down the whole time.
Fourteen hour flight? The longest flight I've been on was just over nine hours and that was long enough for me. How did you cope?

The trip of a lifetime. Happy anniversary and graduation! I'm with Jim, more bird photos, please.

The trip of a lifetime with memories to last.

Jim and Margaret - Ha! You're right, Not a single bird photo here, even though of the 1800 photos we took on the trip, at least a third are of birds! What was I thinking? So to rectify that, I'll point you toward my husband's site, where he's been posting day by day accounts of the trip. Many bird photos, and I'll bet many more to come. http://johnftollefson.blogspot.com/

Thanks, Art! We had such a terrific trip. My husband's already talking about going back again, but I don't know about that 14-hour plane ride...

Thanks, Shari! I'll admit I had some pharmaceutical help coping with the flying. Still, when we flew over Hawaii and still had 8 or 9 hours to go before Brisbane, I wanted to beg the pilots to please just pull over and take a little break. :)

Julie, what a great trip, and such a beautiful story. It brought moisture to my eyes. I loved the pictures, too. I'm not sure I could stand a trip that long though.

What a great trip and what a beautiful remembers of your mother-in-law. Thank you so much for sharing.

Thanks, everyone, for your sweet comments!

You were so smart doing something like this now while you all can enjoy it. I've learned the hard way that it's the things in life that we don't do that we regret the most.