On Saturday, March 12th, my local chapter of Sisters in Crime – NeoSinc, with Laurie Kincer of the South Euclid-Lyndhurst Branch of Cuyahoga County Public Library, put on Death March, a mystery readers and writers’ conference. It was a fun and informative day with many people attending.

Our keynote speaker was S.J. Rozan

Before the event began, there was coffee, tea, hot chocolate or bottles of water along with lots and lots of fresh donuts. Throughout the day baskets of candy bars and other treats were available, too. Our chapter and the Friends of the South Euclid-Lyndhurst Branch Library furnished all the food and drinks that day.

Laurie Kincer and our president Irma Baker welcomed us and suggested that those writers who weren’t already members might want to join our chapter and pointed out who to see to sign up. They also told us what to expect including that they would be drawing names between each program for gifts members of our chapter had donated.

Dr. Katherine Clark, a mystery expert, and a member who has been with us since we first started meeting, long before we formed our chapter was our emcee. She got her doctorate researching mystery authors and their books and taking extensive polls of both writers and readers. I remember when she came to visit me and gave me her thesis to go over before she submitted it.

With her unique sense of humor, she called published authors to the front and lined them up on a continuum from scariest and/or goriest mysteries down the gentlest of the cozy books. It brought lots of laughter as the authors tried to figure out if one was cozier than another, or one had more violence in their books than another. I might be missing a few authors names here, but I remember Shelley Costa, Mary Ellis, Amanda Flower, D.M. Pulley, Victoria Selvaggio, Sam Thomas, Ann Turzillo, and either Scott Lax or Andrew Welsh-Huggins. One of those last two came later. I’m pretty sure Amanda Flower was at the very end of the cozy line. In fact, the joke was she should go out the door into the hall because of the sweetness of her mysteries. She is the daughter of a retired and now deceased Presbyterian minister, a special woman I was privileged to meet several times at Malice. 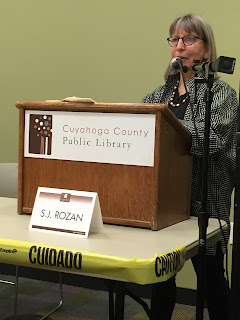 Next S.J. Rozan discussed “Categorization and its Discontents.” She’s an excellent speaker and held everyone’s interest and answered a lot of questions at the end. I for one enjoyed her talk, and I know others did, too. One of the reasons she was happy to come, was that she had gone to Oberlin College and was familiar with the area and liked it.

Jane Turzillo, a writer who writes true crime historical stories of murderers in Ohio moderated the next panel: Getting (and Staying) Published. Panelists were D.M. Pullen, Mary Ellis and Sam Thomas. This panel elicited lots of questions from those who were unpublished writers after the speakers answered the questions Jane had asked them.

And then it was lunch time. Some ate box lunches ordered in advance, some brought their lunch, and others left to go to a nearby restaurant. There was more than enough time to eat and visit with different people. I sat by Nancy Layan after I went back to the conference room, and before it started we had time to get acquainted and ended up exchanging copies of our first books before we left. She recently joined Sisters in Crime, but wasn’t sure about joining our chapter yet since she doesn’t live close to where we meet.

After lunch, Dr. Katherine Clark led a lively interview of S.J. Rozan. I know everyone enjoyed it as much as I did.

Kim Hammond, another of our original members, moderated the panel “Bring on the Sizzle: Writing to Keep Readers Reading. Members of the panel were Shelley Costa, Scott Lax, S.J. Rozan and Andrew Welsh-Huggins. It was another interesting panel, but I have to admit I was starting to wilt. I had gotten up early and driven an hour to get there. Still others were interested, and I admit I found it interesting, too, but most of it was what I already knew.

The last panel was “Do You Really Need an Agent?” moderated by T.K. Star with panelists Amanda Flower, Victoria Selvaggio, an author and an Associate Agent with The Jennifer De Chiara Literary Agency, and Jane Ann Turzillo.  I have to admit that now I was more than ready to go home as was Nancy. It had not only been a long day, but I’m long past looking for an agent. But there were beginning writers, or writers who have a book and still looking for an agent, who were quite interested and asked a lot of questions.

There were book signings afterwards. I didn’t sell any books, but I bought two. I don’t think very many books were sold because I didn’t see anyone signing books, but maybe it was during lunch or something. I know the gal from Macs Back Books who brought a lot of books was packing up boxes and boxes of books to take back to the shop.

All in all, it was a good day. I learned a few new things, met fellow writers – those I knew, and those I met for the first time that day. I didn’t get lost getting there, and I made it home still awake, although barely. One thing still brings a smile to my face. There was a young man whose name tag said, Justin Thyme. I asked him if that was his real name or a pen name. He smiled and said, “Pen Name.” I said “I wondered if you had a mother with a quirky sense of humor.” Now I’m wondering if I could possibly create a character with that name. Think it would work?

What writing events have you gone to that you enjoyed?

There's a local conference, Murder as You Like It,run by a mystery bookstore. It's fun and much more intimate than the larger conferences.

I do like Malice Domestic (who else is going this year?) and last year made Bouchercon, which was in Raleigh. This year, in New Orleans, looks doubtful.

Sounds like a full day. It’s disappointing that so few books were sold. Although if the audience was other authors, that is often the case.

My favorite convention has been Left Coast Crime. I have found it as both an author and reader to be very well run. I will be attending Malice Domestic this year.

KM, I like smaller conferences,too. I know I won't be going to Bouchercon this year - too far
away and too expensive, especially since I'll be heading to California to visit my daughter
in September. I can only afford so many plane fares as well as animal care expenses.

I agree, Jim. I did buy two books, but one author wasn't there and the other was one of
S.J. Rozan's book, but I didn't stick around to have her sign it. She wasn't at a table and
others were standing around waiting to talk to her, and all I wanted was to head for home.
I am so glad you will be at Malice this year. I imagine it will be on your way home to
Michigan. If you and Jan want to stop by and spend a day or two at my house again and get
some shaggy dog love, you're more than welcome.

I enjoy smaller conferences too, even though the spectacle of Bouchercon is awesome. Like Jim, my favorite is Left Coast Crime, big enough to feature a variety of major talent so that the reader in me can fangirl, but small enough that I have a chance to get to know people and reconnect. Highly recommended.

I love Malice and will see you all there! I did Bouchercon in Raleigh - wonderful but so big and it was split over two hotels which meant a lot of running around. I've heard such good things about Left Coast - It's going on the bucket list.

I have enjoyed big and small conferences. This one sounds great.

Justin Thyme! Absolutely you can construct a character with that name, Gloria. He would fit right in too.

I've never been to a conference per se. Had to back out of B'con this year due to health issues, hoping to go next year when it's in New Orleans. I'm looking forward to the energy lift that I've heard about that accompanies conferences when I finally get to go to one!

This conference sounds like it was just right. But made for a long day.

Tina, I've heard good things about Left Coast Crime, and if it every comes anywhere near San Francisco, where my daughter lives within driving distance, I think I'll go to it.

Shari, I really enjoyed the time we spent there, especially when we went to Mass in that
beautiful cathedral. I'm looking forward to seeing you at Malice.

Warren, it was nice, small and within easy driving distance.

Kait, I hope you're feeling good enough to make it to the New Orleans one. I won't be there, but I think you'll enjoy it. I hope to see you at Malice one of these years.

My favorite is Left Coast Crime, too. Just got back from Phoenix. It is that smaller of the larger conferences. This year they had an author-go-round that Malice is famous for, and I missed it. Never again. Though I won't be going next year, don't like Hawaii, I will be going to Toronto, even though I can't imagine YYZ being classified at WEST Coast. :)
Pat Gulley

what a wonderful gathering! I wish we had something similar in Cincinnati.

Pat, I'm glad you had a good time, and no Toronto is nowhere near the West Coast. It's even further east than I am.

Margaret is there a Sisters in Crime chapter in Cincinnati? It seems like the city is large enough to have one, although probably not as large as Cleveland. We actually don't meet in
Cleveland, but south of it so we cover a lot of area.