How Not to Respond to a Critical Review

“Last year, 18-year-old Paige Rolland wrote a blistering review of The World Rose, a story uploaded to the self-publishing website Wattpad by Richard Brittain, on the website Goodreads. Brittain…was so incensed by her critique that he traced Tolland down at an ASDA grocery store in Scotland where she was stocking groceries, sneaked up behind her, and hit her over the head with a wine bottle. Rolland was rushed to the

“'Creepy' Brittain wrote in his blog that the woman he was stalking became the central character in his 'epic fairytale romance' novel, The World Rose.” (Daily Mail, 10 November 2015)

Joyce Carol Oates, a prolific author, says, “The average review is a quickly written piece not meant to be definitive. So it would be misguided for a writer to read such reviews attentively. All writers without exception find themselves clapperclawed from time to time; I think the experience (provided one survives it) is wonderfully liberating: After the first death there is no other . . . A writer who has published as many books as I have has developed, of necessity, a hide like a rhino's, while inside there dwells a frail, hopeful butterfly of a spirit.” (The Paris Review Fall-Winter 1978 No. 74)

Many of us will never get to the point of having “professional” reviews of our books, but the reviews on Amazon and similar sites, are an important marketing tool. And the feedback is valuable. 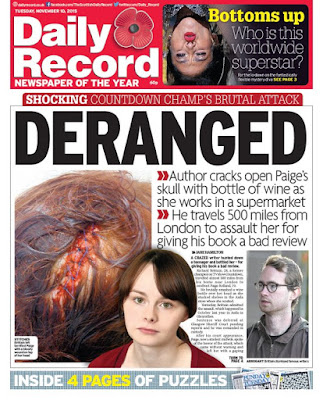 Reviews can be important to authors, and it can be difficult to get them. People considering buying a book often read the reviews. I always read the one and two star reviews, since often what the person is complaining about won’t bother me in the least. Additionally, some of the promotion sites like to see a number of reviews before they will consider accepting a book from an unknown author.
Bad reviews sting, and it can be hard for an author not to take them personally. But they are better than no reviews. And I find I can learn a lot form some of them.
I’ve gotten several one or two star reviews for my books. One, for Steeled for Murder, the first in my Jesse Damon Crime Novel series, stated “I normally like historically based books.” I have no idea if somehow the reader thought this contemporary crime novel was historical, or why he/she bought it. Not surprisingly, the reader did not care for it.
A review of the second in the series received a two star because it was “way too much like the first book.” While that’s an interesting perspective that I will take into consideration, I have to admit that to a certain extent, that was deliberate. All the books in the series do have a number of similarities. And for the people who like them, that’s a strength.
Perhaps the most mystifying, for me at least, is a one-star review for the fifth in the series that says, “Did not like the book. Boring.” I realize the reviewer is under no obligation to explain further, but I didn’t learn much from that one.
The advice I have frequently gotten is never contact someone I don’t know who has left a review. Since I have a website, anyone can contact me through the site, and I have some very faithful fans who have done just that. Those people I thank for their reviews.
And under no circumstances should an author track down and assault a critic.

I cannot imagine the mindset of an author (or anyone) who would attack someone for a negative review. that truly frightens me and makes me glad that I rarely review anymore.

I have to admit, I would not post a negative review. I might admit I didn't care for a book on a user list, but a negative review, no. Unless the book has NO redeeming qualities (in which case I didn't finish it anyway so what am I reviewing) I figure that it wasn't necessarily the book that was bad, it was more that it wasn't to my taste. That's nothing to be negative about, and it's not necessary to share.

There are folks who thrive on seeking out something negative to say and posting. I don't understand them, but I know they are out there. Have I ever gotten a negative review? Yes, I have my share of one stars. I wouldn't contact the reviewers, they are entitled to his/her opinion and I'm not going to change it. No need to engage. I don't contact any reviewer unless I know them. And then, it's just to say thanks!

Let's hope the above philosophy keeps me impact free!

Of course I have had negative reviews. One reviewer wrote that the title of my book MURDER MANHATTAN STYLE was "deceptive." Apparently, she envisioned a different Manhattan than the one I described. If you can't tell a book by its cover, what can you tell from its title?

I did no stalking. Now I have a funny anecdote.

I'll watch what I write in Goodreads reviews. I wouldn't want to get the reputation of being "one of those reviewers."

Kait, I don't write many negative reviews, either. Life is too short to keep on reading if I'm not enjoying the book, and if I didn't finish it, I don't feel I should review it.

Warren, that is interesting I wonder what "Manhattan" your reader envisioned?

Margaret, I don't think you have to worry about being "one of those reviewers," especially on Goodreads For a while there, some "trolls" were entering giveaway contests & writing scathing reviews for the books they didn't win. I stopped using Goodreads at that point, but I've been told that the problem was somehow addressed. Maybe it's time for me to return to Goodreads.

Kait, I rarely write a review, although I know I should. Somehow I never get around to it,and I admit except for the first few weeks after my first book came out, I have never gone back to Amazon to read the reviews so I have no idea whether I'm getting good or bad reviews. I just enjoy the ones people give me in person or that I hear about from others.

Gloria, the biggest pleasure is having people enjoy your books! It's really nice when they tell you!

I just tray read about another incident. Whether it's true or not I can't tell.

Gore Vidal gave one of Norman Mailer's books a scathing critique. They ended up at a party together. Mailer dumped his drink on Vidal and punched him.

Vidal's response was to say, "Words failed him. As usual."