Huh? Did You Really Ask How to Come Up with Ideas? By Linda Thorne


I’ve been hanging around wannabe writers and emerging authors for a long time and can’t tell you how many times I’ve heard someone ask, “How do you come up with ideas?” The question is always directed to folks in the established writing world like bestselling or midlist authors, sometimes an agent or editor.  The responses they receive are normally something simple like, “They just pop into my head.” Such answers seem to disappoint my inquisitive cohorts. They often look confused as if expecting a detailed textbook answer. I’ve never understood the question because I’m inundated with ideas, everyday, everywhere.

How do you not get ideas?

Maybe whoever is asking really wants to know something else altogether; like, how to thread ideas into a perfect plotline?  Perhaps they know they have ideas, but don’t credit them as such because they’re too close-to-home to see as “real.” I don’t know. Something’s awry because even though I hear the question often, I don’t see or hear about people doing research on the subject. With all the writing self help books recommended to me, I’ve never known anyone to recommend one on this topic. The writing conferences seem to go the same way. 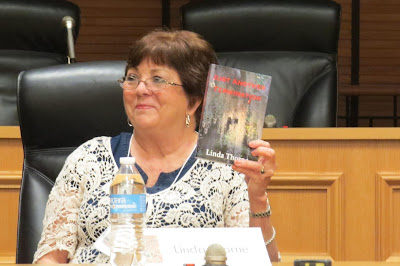 At a writers’ conference a few years ago, I was running late for a session on writing query letters when I hurried into the wrong room. Only two other guests were present. One of the panelists mentioned being stunned they didn’t have a better turn out since coming up with ideas was basic to writing. I recalled seeing this how-to-find-ideas topic on the agenda and crossing it off. I honestly would’ve stayed to not disappoint the speakers further, but I had a desperate need to improve my query letter writing skills. I apologized and left. That was the first time I’d seen that topic in any writing workshop or conference, and I’ve never seen it since.

I read an article years ago written by Lawrence Block where he talked about taking an idea from another author. He said he’d heard Don Westlake had written the beginning chapters of a book about a woman being raped on her wedding day. The woman and her husband then took off after the rapists to exact revenge. Block saw this as an interesting plot and, when he didn’t see any further development on the book, he contacted Westlake and learned he’d decided to chuck it. Block asked, and got approval from Westlake, to use his idea. He wrote the book and titled it, Deadly Honeymoon. Lawrence Block has written over a hundred books, so could volume cause you to run out of ideas? No way! Block got this idea like all of the rest of us get ours. Something hit him as interesting for a book. The only hinge here was he’d have to get approval to use it.

Think about the many times you’ve heard someone say, “I should write a book.” Every unusual or meaningful experience we have— news reports, things we witness, experiences and events every single day could be topics for books, storylines, right? Even Lawrence Block, who’s written so much, wakes up to a new world each and every day.

If I ever make it to a level where people ask me how I get my ideas, I’ll tell them, “Just like you do.” Only, I think I might add a little textbook explanation to help them understand how simple it really is. Linda Thorne began pursuing her true passion, writing, in 2005. Since then, she’s published numerous short stories in magazines and four in an anthology by the Nashville Writers Meetup Group. Her debut novel, Just Another Termination, published by Black Opal Books in August 2015, tells the story of Judy Kenagy the first human resources manager to turn sleuth or, at least, the first to admit it. Just Another Termination is the first in a planned series of Judy Kenagy novels. She is currently working on the second in the series, A Promotion to Die For. Like her lead character, Thorne is a career human resources manager. She’s lived in the greater Nashville area of Tennessee since 2008 with her husband and two border collies, Abby and Mo. http://www.lindathorne.com
Posted by E. B. Davis at 12:00 AM

Another series to add to my to-read list! I'll bet there's no end to the mysteries an HR sleuth can become involved in.

I subscribe to the 'How can you not come up with ideas' approach. Every time I think of something, I throw it into a few story dumps. They are files that are a one liner, or a paragraph, an image, something to think about. Some times stories evolve from them. Other times, they sit there waiting for something else. For example, I had an idea for a SF story based on faster than light travel only working when the temperature of space reached a certain temperature. It sat there for a couple of decades I believe. In another idea, I wondered what what would happen if wormholes did not take us to near stars, but half way across the light year. Then a few months ago, I thought about combining the two ideas. I also thought of gravity at a certain level also affecting the wormhole and now I had multiple wormholes in many solar systems, and ideas started popping into my head. I have sent the first one off to Analog, and begun on the second one I have planned out, with three or four more coalescing. There are all kinds of ideas, some times they need to ferment to get them ready.

I agree that writers have no problems getting ideas for stories. But--not every idea results in a story.

--Sometimes through research the idea gets invalidated.
--Sometimes in the idea's execution, we realize the idea isn't enough to sustain a good story.
--Sometimes the story in execution morphs into something unlike the original idea.
--And sometimes the original POV we conceived for the idea, turns out not to be the revealing POV necessitating us to change it, and we bulk at having to transform our idea--the writer's pout!

Which is why when I nonwriter says, "I have an idea for a story," often the idea doesn't really make for a story, and when the writer tries to explain the three-act structure, etc., nonwriters get insulted--the nonwriters' huff!

Thanks for sharing at WWK, Linda!

I, too, am seldom at a loss for ideas. Rather, I'm at a loss for the time and energy to implement them. I just submitted galley corrections for Abductions and Lies, the sixth in the Jesse Damon Crime Novel series, and I have three short stories demanding to be written, the next Jesse story popping into my head, and three other non-related novels I'd like to get to.

E.B, I never try to explain anything to non-writers. I just say, "That's interesting. You could work on it."

HR knows everything, or pretends they do. Great premise for an amateur sleuth series.

I mine the agony auntie columns in the Washington Post and do weekly five word story prompts.

Well, what a nice mention to encounter this morning! And it does take me back, as Deadly Honeymoon was my first hardcover novel, published by Macmillan in 1967. Timely, though, as I've just re-released it as a volume in the Classic Crime Library, in both ebook and trade paperback http://tinyurl.com/gspcsu2 Now where did I get the idea to mention that? Why, right here on your blog!

As a crime writer, I mostly steal ideas. Overhearing conversations in restaurants and by people talking on their cell phones frequently sparks my imagination.

I'm with you, Linda, how do you NOT get ideas? The trick is building an idea into a story.

Thanks to all of you for these fabulous comments. Lawrence Block appeared. I'm sure glad I don't say nasty things about famous authors. I didn't know they could find me. Lawrence, I recently found another of your older books (no time to read it yet). It's The Burglar in The Rye.

Thanks E.B. Davis for hosting me. When I originally wrote this post, I ended it with a separate sentence that asked, "What do you think?" I deleted it, thinking people might give me their opinions without asking and they have. Yes, like you said the ideas are there, but we may not want to or be able to use them all. I like the responses about putting them away in files for later. I certainly agree with KM Rockwood about not having the time or energy for so many. I enjoyed reading all the comments and looking into the history of the visitors.

Our least favorite question, by far! I wrote a blog on it once, and now I'm done with that question. It's like asking someone how they decide which words to use when they want to say something, or maybe not.

Thank you Kaye for your comment. I think I wrote the first version of this when I was hosted on your website blog last year. It's a subject I needed to share because I'm being attacked with so many ideas I want to write about, but don't have the time to do it. When I hear someone ask how to get ideas, I sometimes want to scream. I will not live long enough to put all my ideas in writing and they are still coming at me.

Great interview! As a reader of Just Another Termination, I can say that coming up with the idea for a cozy mystery about a HR manager is original. Linda saw it and went with it, as all writers do. Lawrence Block included. I'm sure you all agree on that. How does one not come up with ideas? We can't, can we? Ideas show up in many forms and places.

How nice to see you here too, S.J. Thank you. I truly enjoyed reading your book, Shattered Lies, too.