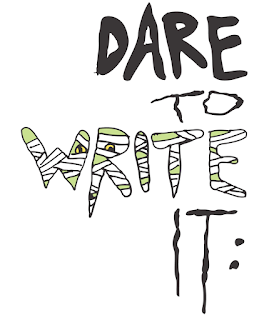 Some of our readers probably have this tattooed on their inner wrist; for those of you not so dedicated to this craze, the initials stand for National Novel Writing Month. You can check out their website at http://nanowrimo.org.

The basic idea is to encourage people to write that novel that is in them—or at least 50,000 words of it—during the month of November. The objective results in an average of 1,667 new words written each day. It costs nothing to join the party. “Winners” get to brag, receive discounts on writer-related stuff, and have 50,000+ first-draft-quality words.

It started in San Francisco in 1999 when a bunch of guys decided that being novelists might enhance their chances at getting dates. I kid you not. It’s morphed into something much larger. But today I will focus on one individual’s reason for joining up this year (and I assure you it has nothing to do with enhancing my dating opportunities.)

Question: Why in 2015, when I have many things on my plate, have I committed to writing 50,000 words in November and opening myself to embarrassment if I don’t reach the goal?

Answer: Because other things are distracting me from writing new words.

In January 2015 I taught an online course (Self-Editing) for the Kiss of Death Chapter of Romance Writers of America. It went extremely well. I received lots of positive feedback, and I liked it a lot. But it didn’t help me write anything new. 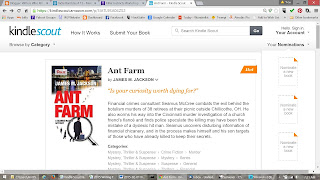 Then I entered the Kindle Scout program with my novel Ant Farm and spent thirty days promoting the heck out of the nomination process. I was successful and received a contract from Kindle Press, but that isn’t writing new words either.

I attended Donald Maass’ weeklong workshop on “Writing the Breakout Novel II” because I wanted to make my novels even stronger than they were. I have been applying what I learned to my next Seamus McCree novel, Doubtful Relations. I rewrote that entire book based on the workshop, sent it to beta readers, and am rewriting based on their feedback. But that isn’t writing new words either.

In July I was elected president of the largest chapter of Sisters in Crime, the Guppy Chapter with over 600 members. I’m proud to say the Steering Committee has done some great things in the four months of my presidency, but it takes lots of time to coordinate that work. And (say it with me now, you know the refrain) that isn’t writing new words either.

This year I’ve taken some great trips; I’m teaching some bridge lessons in October and November; I have given presentations at various writing groups; I’ve attended several mystery conferences; and I am redoing the Self-Editing course in January 2016, this time for the Lowcountry Sisters in Crime Chapter (check it out here if you are interested). But, (all together now) that isn’t writing new words either.

So I am committing to writing 50,000 new words in November. And I will. You can be my buddy if you’re into NaNoWriMo (I’m JMJackson054). Once November is over, I’ll fess up on how I’ve done, but I am confident that by the end of the month I will have at least 50,000 words of Empty Promises (the fifth Seamus McCree novel) on the virtual paper.

How about you? Anything planned for November other than Thanksgiving? (And yes, I know our Canadian readers already celebrated Thanksgiving this month, but somehow choosing Remembrance Day, or Veterans Day just doesn’t have the same festive feeling, eh?)

Wonderful, Jim!I'm Mystery Diva NaNo is addictive. I've only entered once before (won)and I love it. What a great way to get words on the page. I entered NaNo the first time because I was living in Maine and had a diving character that would not leave my brain. I was also working on polishing my first novel and really did not think I had time to write a second. I figured I'd see what I could crank out and then worry about polishing it some other time. That NaNo effort became Death by Blue Water.The second in the series is due out this spring, and I want to use NaNo to kick start the third.

See you on the NaNo Boards! Write on!

Great story, Kait. I just added you as a Buddy! Best of luck with Book 3.

I had time to do Camp NaNo in July, in a Guppy cabin. Great comradery.And I did my own NaNo the month of August, cranking out my second novel. Enjoy your month. With Thanksgiving and December deadlines, I can't focus on anything else.

Determination and persistence are a writers best friends. Way to go!

I'd admire those who do NaNoWriMo, however, I don't care to be committed to it. It would only be another thing on my incredibly long to do list, and add to my feelings of guilt about not doing it. Also, I'm between books right now, and have no ideas for a plot on my next one, and I'd have to work on that before committing to writing that much.

Gloria -- Timing is everything. Margaret was able to do Camp NaNo this July and continued cranking out words in August. In my case I have a novel to write and the timing is right -- so a little peer pressure might just help me focus on a task I want to do.

The only way it would work for me is if I had the plot outlined well or if I was rewriting a rough draft (is that allowed?). I know rough drafts are...rough! But if the plot doesn't work because I haven't thought it through, for me, it would be more than rough, it would be a frustrating waste of my time. I've never seemed to have a plot that well outlined in November so the timing has never worked for me to participate. Starting a project going into the holidays just seems nuts.

I participated in NaNo a few years ago and wrote a screenplay. This summer I joined Camp Nano (Guppy cabin!) and wrote several short stories. The deadlines plus peer pressure motivated me to complete my goals.

Good luck on NaNo, Jim! I'm hoping to finish this WIP in November.

I'm with you, Elaine. I have to know where my story is going before I could sit down and write 50,000 words. I am definitely a plotter. That doesn't mean that I don't add chapters and details to my already outlined manuscript, but I need that outline, especially since I don't always write in sequence. If I'm stuck, I'll jump ahead and write a chapter that falls in the middle. Maybe I should use November to sit down and work on an outline. That's a thought.

Blogger doesn't like me, Jim, so I'll post a comment here. You have definitely inspired me. I've been doing similar things (okay, maybe not the same, family visits, short stories, addiction to solitare on the internet). And, I expect November to include trying to get the novel that is finished, edited, beta-red, and cover almost done moving along, plus a few other things. Oh, no, I can't do NaNoWriMo too. But maybe I can.

Thanks for the encouragement, everyone.

I suspect those with outlines have an easier time with cranking out words. And I fully understand why those who are only comfortable as plotters wouldn't bother with something like Nanowrimo unless they had their plot in hand.

As a pantser I have come to recognize that some portion of my first draft words are wasted in the sense that they will end up in scenes that I later cut or modify extensively.

But that's the way my brain works: I peel my own onion, understanding layers and nuances only after I have written the surface material. I wish it were otherwise, but attempting to outline results only in delay.

So, I'll push my Nanowrimo canoe into river on Nov 1 knowing the story is set in the Upper Peninsula of Michigan as was Cabin Fever and see where it all goes.

I'm going to do an unofficial half-nanowrimo or as I like to call it a demiwrimo, since I have an unfinished middle grade manuscript sitting at 15K words. Please feel free to bug/encourage me at the end of the month to see if I've finished it.

Good luck with your NaNoWriMo!