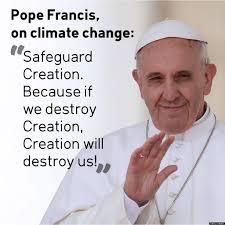 As a life-long Catholic, I was thrilled when Pope Francis came to our country. Not only because he’s a humble and a caring pope for the poor, who impressed thousands of people while here, and not just Catholics. To see the massive crowds hoping to get even a glimpse of him was so touching to me, and made me realize he is more popular than any politician, rock star or movie star and with complete humility. I wished I’d been able to go with a group from my church that went to Philadelphia to be there when he came.

But in addition to that, I was happy to hear how he took a stance supporting global warming, and said it was our duty not only to acknowledge it, but to do what we can to reverse it or at the very least to stop it. I never cease to be dumbfounded when I hear the deniers of human caused global warming saying it’s not caused by humans, or the doubters who are almost as bad. 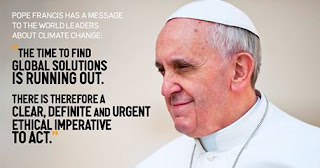 From a recent visit to California, I could see how bad the drought is there. According to a New York Times article 8-20-15, by Justin Gillis, California Drought Is Made Worse by Global Warming, Scientist’s Say  “Global warming caused by human emissions has most likely intensified the drought in California by 15 to 20 percent, scientists said . . . warning that future dry spells in the state are almost certain to be worse than this one as the world continues to heat up.”  Later he quotes A. Park Williams, a climate scientist at the Lamont-Doherty Earth Observatory of Columbia University and the lead author published by the journal Geophysical Research Letters. “This would be a fairly bad drought no matter what. But it’s definitely made worse by global warning." 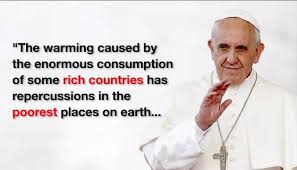 Richard Seager, a senior climate scientist at Lamont and a co-author with Williams, said “It really is quite simple. When the atmosphere is as warm as it is, the air is capable of holding far more water. So more of the precipitation that falls on the ground is evaporated, and less is in the soil, and less gets into streams.” 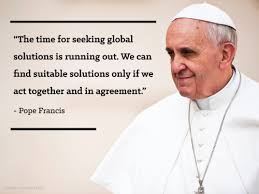 Gillis further wrote that "The National Oceanic and Atmospheric Administration also reported recently in August that global temperatures in July had been the hottest for any month since record-keeping began in 1880, and that the first seven months of 2015 had also been the hottest such period ever. Heat waves on several continents this summer have killed thousands of people.”

He writes further “The paper on the California drought echoes a growing body of research that has cited the effects of human emissions, and even scientists not involved in the work described it as more thorough than any previous effort because it analyzed nearly every possible combination of data on temperature, rainfall, wind speed and other factors that could be influencing the severity of the drought.”

The research, said David B. Lobell, a Stanford University climate scientist, is “probably the best I’ve seen on this question.”
When I researched my blog on trees in trouble, I watched a video of a young scientist who studies trees. She said the large and very old California redwood trees are in danger of dying from lack of water. That would be such a shame to have those ancient trees die off.

In an article in Climate Change 2015 Wed. 2015-04-15 by Philip Ross, he wrote “NASA launched its Atmospheric Infrared Sounder, or AIRS, project in 2002. It was designed to gauge global temperatures, greenhouse gases and cloud cover. Scientists are taking a giant step back – hundreds of miles back, in fact, to put climate change in clearer focus. (http://www.ibtimes.com/climate-change-affect-florida-coral-reefs-sooner-thought-bleaching-outbreaks-could-be-1870718) Twelve years of NASA satellite data is helping researchers better understand the role cloud cover and water vapor play in global warming. And what they see is anything but encouraging.

Philip Ross ends his article with, “The ongoing climate change debate continues to elicit a strong response from both deniers and believers. Even though 98% of scientists worldwide agree that climate change is real and happening because of humans, many Americans continue to deny man’s hand in global warming. Nearly one in five people in the U.S. say climate change is a hoax, while 63 percent say it’s real." 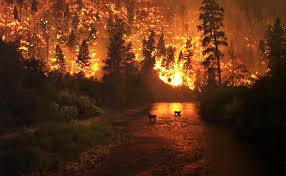 In my opinion, the horrific wildfires in the west should be sufficient to have everyone believing global warming is serious. In the past I spent a delightful vacation in the Okanogan area of Washington State, and it sickened me when I heard of the massive wildfires in that area. And what about the flooding in coastal towns in the east from hurricanes, or the fact that this year I’ve had an excessive amount of rain while the west suffers? Rain that has set records going back many, many years. What about the melting of the glaciers and the rising of the sea levels?

And some of the denial is ignorance, too, by people who don’t follow the news unless it has something to do with movie stars, etc. A nurse my California daughter worked with didn’t believe there was a real shortage of water and wasn’t going to do anything to conserve water because there was all that water in the Pacific Ocean. My daughter, who religiously conserves water, was quite frustrated with the woman. 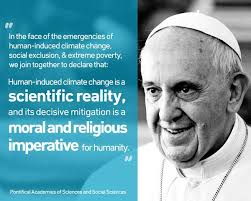 I agree with all those who care about the environment and have even before the whole topic of global warming came up. I’ve been recycling for at least forty-five years when the first recycling center opened up in our county ten miles away from where I lived then. Now there are recycling centers in almost every community which doesn’t give anybody an excuse not to recycle. I drive a small car for the same reason, and save on electricity as much as possible by hanging clothes out spring through fall weather permitting, and turn off lights, etc. when not needed. I also compost almost everything that can be composted.  I only hope more will be done to help save the only planet we have.

I downloaded five or six articles on the topic, but because of space limitations, I could only use several and even in those articles I could not include everything that was written. If you want to learn more about global warming, just go to Google, and you’ll find enough to keep you reading for a long time, and you'll find many, many sad pictures of the flooding in South Carolina.

What is your opinion of Global Warming?
What do you do to help our planet?

The pope was a scientist before he joined the church, which may help him combine scientific ideas and religious beliefs.

what a mess we've created! California is a beautiful state, ravaged by earthquakes, wildfires, and now the drought.

We lived through a drought in Atlanta with severe water restrictions including no outside use. Each shower had a plastic bucket to catch water for deep-watering bushes and trees. I hauled washing machine gray water for the same purpose. We washed the cars during a rainstorm.

Nothing is sweeter than sheets hung out to dry in the summer sun.

Thanks, Gloria, for an interesting blog. I think his message went beyond global warming to include the importance of taking better care of our planet overall. A good solid message for people of all faiths.

A survey of scientific journals showed 97% of papers supported the proposition that human activities were in large part responsible for the documented global warming trends over the last century. Does that mean they are right? NO. Does that mean the 3% are Wrong? NO.

Does it mean we can ignore the 97%? Only at our peril. Here is my proposition: If (as I and the 97% agree) human activity is causing global warming and if (as the huge preponderance of models show) global warming is harmful to humans (not to mention the other animals and plants), then it is well worth whatever money we spend now to prevent as much global warming as we can, because we will spend many times more in remediation of the results of doing nothing. If I and the 97% are wrong, we have wasted a lot of money, but that is all we have lost from being wrong.

If the 3% and all their fans who urge we do nothing (or wring their hands and choose to do nothing) prevail and we do nothing and they are wrong, eventually we make Earth uninhabitable for most species, likely including homo sapiens. They have gambled away our future.

I'm old and will die anyway before the worst consequences. But I want to place my bets so all generations can live, not just mine. I would rather be wrong and waste money, than be wrong and ruin the planet for everyone.

I tried to insert a link to the 97% reference, but it didn't take. It is http://climate.nasa.gov/scientific-consensus/

I recently spoke to a friend who has lived in Southern California her whole life. She said this was the hottest summer she remembers. Her neighbors are tearing up their lawns and using rocks or fake grass to landscape.

Warren, that is so true. He us up to date on problems in the world.

Margaret, my daughter keeps a bucket in her shower, too. She's still trying to find someone who knows how to connect the gray water gismo she got to save water from her washing machines.
I think there's not much that smells sweeter than sheets dried outside on the line when I crawl into bed when I've just made the bed with them.

Grace, I agree with you.

Jim, you make total sense. I probably won't live to see all the damage that will be done to our world, but I care about those coming after be it may be human or other life forms.

Kara, my daughter hasn't been a homeowner long, but she has turned to mulching her whole yard and using rocks and drought tolerant plants, and she said the heat is horrible, too.

Gloria on KM's laptop at Bouchercon