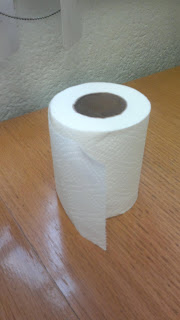 On July 6th, 2015 Sarah Robinson was not arrested.  On that date she could have been.  After all, she was caught red-handed shoplifting. Roeland Park Police Officer, Mark Engravalle was called to the scene.  He discovered the theft was committed by a single mother of six children who was trying to provide diapers and wipes for her children. Instead of arresting her, the officer paid for diapers, wipes and shoes for the children. The story generated such interest and so many financial and product donations that the Robinson family can stop living in their car and start living in an apartment.   It’s a heart-warming story, but it is the story of only one family.  Sarah is not the only parent who can’t afford necessities.

Food stamps can be used only for food.  It’s easy to understand the reasoning behind that restriction.  It’s also easy to see that food is not the only necessity.  Toilet paper, soap, feminine hygiene products toothbrushes and toothpaste are also needed.  Children who go to school smelling bad because their parents cannot buy soap are very likely to be picked on and bullied.

In the Kansas City area, Teresa Hamilton became aware of one family’s problems.  They got food stamps but they needed the sort of things noted above.  They felt embarrassed to ask for assistance.  They didn’t know where to go or who to ask.  Teresa and others pooled their resources to help them.  Teresa then concluded there had to be many more families with similar needs.  She founded Giving The Basics at www.GivingtheBasics.org

The purpose of the organization is become a central hub for individuals and businesses to donate products and financial resources for the purchase of “human dignity products,” which are them distributed effectively to families and individuals in need.

Organizations such as churches, schools, businesses, health care agencies and community groups put on drives to collect human dignity products.  Volunteers sort, count and case the items for distribution.  Charities, food banks, women’s shelters, homeless shelters and churches give the donations to the people in need.

According to Michele Orpin, Director of Operations, the organization serves 10,000 people with the help of 150 volunteers and 25 donors a month.  Obviously, the organization is very well organized and efficient. When a church I belong to volunteered to help, Teresa and Michelle put twenty of us to work for two and a half hours.  There is a lot to do and they do it well.

Click below on the video link to learn more!
Serving the needs of children

Wonderful post, Warren. Human dignity products. Perfect description. With the anniversary of Hurricane Andrew fresh in the minds of Floridians who lived through it, and the anniversary of Katrina so vividly before us again, this is a most apropos post. I worked disaster relief for Andrew and quickly learned how important the human dignity products are, and how often overlooked. These days, when I make donations to disaster relief I know someone will be donating tons of spam, canned goods, and non-perishable items. My package is full of diapers, TP, and feminine necessaries. Not sexy, but needed!

Warren -- thanks for bringing the story to our attention. Media tends to focus on the negatives of police activity (it gets eyeballs) an not the positives.

As you and Kait note, living in want is not just about having adequate food. We Americans respond well to disasters; not so well to the cronic needs of those less fortunate around us.

Thank you, Warren, for helping to raise awareness of this issue. As Kait mentioned, most people reach for canned goods when contributing to outreach organizations. In the future, I'll include human dignity products. I always like to include toothpaste and toothbrushes, which is along the same lines.

I collect and donate hotel toiletries to a local "children in need" program. I'll add feminine hygiene products to my bags of shampoo and body wash.

Kait, Jim, Grace and Margaret, Thanks for your post.

Community resources are often available for people who seek them out. Many people donate things that can't be obtained by "food stamps." One church I know has a once-a-month "Undie Sunday" when all parishioners are asked to bring new underwear or socks to be distributed to people who need them. When I was teaching, we kept an eye out for what the kids needed and provided what we could. Sometimes it was hard--a young boy with size 15 feet, a child with serious food allergies who couldn't eat the standard cafeteria food, etc. We had students do untold loads of laundry and distributed hygiene kits. At the holidays, we solicited donations and provided packages with clothes to all students. Sometimes the newer teachers, from middle class backgrounds, thought we should be giving more "fun" gifts. Until, inevitably, one of the kids in the class would open his package, say "Socks! I really need socks!" and immediately put a pair on, often under heavy work boots that the kid had been wearing without socks.

The unfortunate followup to the Sarah Robinson story is that she was recently indicted on distribution of meth charges, and no longer has custody of her children. While it was heart-warming to see her let off the hook with a citation rahter than an arrest for shiplifting, and supplying her family with many things they needed,it really didn't help her situation long term.

Thank you for raising this issue, Warren. I will make a point to include human dignity products when I donate to local organizations.

A touching story, Warren. The Women's Guild of my church often collects the human dignity items for those in need. I've often thought about how when people turn up the poor because they don't look clean, that it's not because they want to be that way, but because cleaning supplies and personal supplies are something they can't afford. We all donate canned goods when there is a need, but forget about these other needs.

Warren, thank you for bringing this to everyone's attention. An organization in my neighborhood has a sign where they post the most pressing needs of the week. I like having that reminder. Canned goods are great but the dignity products are something a lot of people won't feel comfortable asking about.

Lovely story. I'm sad to read the follow up posted by KM, but people are all just human, I guess. The policeman gets kudos for this, nevertheless.


Touching post,Warren. There are many -- individuals and groups -- who do some of what's needed, but we all should do more.

I enjoyed reading your post Warren. My husband and I help at our church food pantry, but we're a small church and only have the pantry one day a week for two hours. Mostly we have older folks, many are Hispanic. Most everyone is thankful for what they get. Only a few try to take advantage, but not all that many.
Reading this post I realized we could do more about the TP and other products. We seldom have those items, most canned foods, and other non perishables. However, we give out fliers with all the other pantries they can contact for help.

i will mention the human dignity items to the lady in charge.