An Interview with Maria Hudgins

Death in an Ivory Tower


It's a scholarly conference at Oxford and the subject is "The Lingering Effects of the King Arthur Tales on Life in Elizabethan England," but two participants don't fit in. Dotsy Lamb, PhD candidate from Virginia, has inadvertently invited a couple of New Agers from Glastonbury. Their agenda is to prove to these arrogant academics that King Arthur and Guinevere were real people. As a big surprise, Bram Fitzwaring plans to produce their royal bones.

But Fitzwaring doesn’t show up for his mind-blowing speech to the conference because he’s in his room—dead. An insulin-dependent diabetic, Fitzwaring appears to have died from hypoglycemia. But Dotsy, also diabetic, says his symptoms prior to his demise do not spell hypoglycemia. They spell murder.

If you are an armchair traveler, and even if you aren’t, you’ll love Maria Hudgins’ Dotsy Lamb Travel Mystery series and her Lacy Glass Archaeology Mystery series. In her books, Maria takes readers to far-flung locations such as Turkey, Greece, Egypt, Scotland, and Italy. I recently read Death in an Ivory Tower, which transported me to Oxford, England. It made me want to travel more with Dotsy and Lacy.
Grace Topping


Welcome, Maria, to Writers Who Kill.

In Death in an Ivory Tower, Dotsy Lamb found herself in the midst of heated arguments about whether King Arthur really existed and whether Shakespeare actually wrote the works attributed to him—issues so contentious they drove someone to murder. Where does Dotsy stand on these issues? Did anyone convince her that Edward de Vere, Earl of Oxford, wrote Macbeth and not Shakespeare?


Dotsy believes in keeping an open mind. On the subject of King Arthur, she recognizes that the evidence for his ever having existed is thin, but a part of her hopes the future will bring new evidence—that he did live and that he was, if not a king, a hero to his people. Of course, there’s no chance at all that he lived as the fables tell, because those stories are medieval and Arthur would have been ancient history to medieval Englishmen.

As for anyone other than William Shakespeare having written Macbeth, Dotsy gets angry at the suggestion, because it’s invariably based on the idea that the son of a common glove maker could not possibly be that intelligent. Dotsy has some choice words for those elite snobs.

I, personally, do not doubt that Dotsy is right.

The victim’s diabetes provides Dotsy with a vital clue in solving the murder. She recognizes the clue because she herself has diabetes. Is this new to the series, or has Dotsy’s condition and the challenges of traveling with diabetes been featured in the other books in this series?

Dotsy has been diabetic throughout the series. In Death of an Obnoxious Tourist, the first book in the series, she passes out on the roof of a hotel due to low blood sugar. In each of the succeeding books, her diabetes plays some role, but not always a big one. Since that first book came out, there have been several medical advances in the management of diabetes. These are making it easier for Dotsy to travel with little worry.

While at Oxford University, Dotsy does research in the Bodleian Library, where I understand they filmed some of the Harry Potter films. Did you gain admittance to the library and browse the collection? Was it like being in a scene from Harry Potter?

I did, indeed. The main ground floor room of the Divinity School (in the same complex) was used as the Hogwarts Hospital. Accessing the book collection is not allowed unless you are cleared for research and that is complicated. Harry Potter filming sites are all over Oxford. I love the grand staircase in Christ Church College that, I believe, twisted and reconnected in the movie. The Christ Church dining hall is used as well. Remember the flying candles?

In their travels around the world, Dotsy and her friend Lettie find themselves involved in a murder investigation wherever they go. What kind of challenges do you face making this plausible?

It is implausible but so far no one has complained. Readers don’t mind suspending their disbelief if it’s a good story. I sometimes make references to Dotsy’s previous exploits but not too often because the reader might decide that this woman is bad luck! 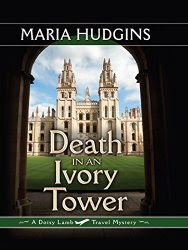 I understand that you visit the places you set your books to do research—a rather enviable task. Do you find yourself traveling to write or writing to travel?

I travel because I want to, but when I’m in a foreign spot, my eyes are open for good places to kill somebody. My ears and nose are open for the smells and sounds that make the place come alive. I take lots of notes in my trip journal.

Which location did you enjoy the most?

It’s hard to pick one, so I’ll pick two. I love Oxford, England so much I’ve visited 8 or 9 times. I’ve stayed in St. Hilda’s College and in Jesus College. Jesus is the prototype for St. Ormond’s College in Death in an Ivory Tower.

My other choice would have to be Egypt. I wrote an archaeology mystery called Scorpion House, available on Kindle, based on my first trip there and the historical thriller I’m working on now is set in Upper Egypt, near Aswan. I hear Egypt calling me so I may have to go back soon.

Does setting your mysteries in different locations present any difficulties in sustaining a series with the same characters?

I can’t exactly have a whole village full of characters the readers know, can I? My continuing characters—Dotsy Lamb and Lettie Osgood—are sometimes joined by Marco Quattrocchi, Ollie Osgood, Chet Lamb, or one of Dotsy’s or Lettie’s children. There’s no need to read the stories in order, because a brief introduction is all these characters need. 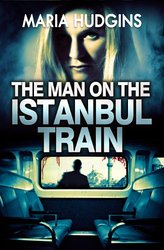 Both your series feature gutsy women: Dotsy Lamb, an educator, and Lacy Glass, a young archeologist (featured in The Man on the Istanbul Train). Which of the two do you identify with most, discounting age?

Both women are similar to me in some ways: Dotsy is tenacious and I am, too. She’s somewhat a product of her rural, mid-20th century upbringing, and I am, too. Lacy Glass is headstrong and accident-prone, like me. She loves science, especially the physics and chemistry of color. My master’s thesis was on a bluish plant pigment you’ve never heard of.

Where will Dotsy’s travels take her (and you) next?

She’s going to Istanbul. I’ve visited this exciting city twice. The book, At the Spoonmaker’s Hotel, is slated to come out in 2017 or 2018 because my publisher, Five Star/Cengage, is scheduling that far ahead. After that, she will return to Italy for some life-changing events. But I’m getting ahead of myself . . .

Was there anything in your background as an oceanographer and earth science teacher that helped prepare you to write about murder and mayhem?

There is always science in what I write. I can’t help it. If you don’t like science you can skip those parts. I do think that a bit of explanation about shellfish contamination or ocean currents make a story more real.

Do you have a favorite place to write?

I write in my den where my dogs keep me company and I can take my laptop from the desk to the sofa to the recliner to keep from sitting in one place too long. Sometimes I take my laptop (MacBook Air) to my new sunroom where I have a chaise to recline on. The dogs, birds, and squirrels entertain me.

In her bio, Maria said: "I’m the luckiest of all possible people. To be able to write what I want to write, spend time with my friends when I want, and with the friends in my stories when I want. All this without having to starve in a garret." Read more about Maria and her travel adventures at http://mariahudgins.com/bio.html
Posted by Grace Topping at 12:00 AM

I've only read the Dotsy series, but I'll bet I'll like the other one, too! I had a thought while reading the first part of this, about King Arthur. Maybe the legends are medieval because the history of him had been passed down by bards and updated by them to fit their own times. Maybe. Thanks for the interview!

Another author with a fascinating back story and books that leave my salivating. My to be read pile is reaching toward the ceiling.

Warren is right - your books sound exactly like my cup of tea, Maria! Wonderful to hear about your travels. I love Oxford but have to admit that Cambridge truly stole my heart.

I've been to Cambridge and it's beautiful, maybe more so than Oxford. I rather think it's the school you see first that grabs your heart. I got a bit weak in the knees visiting Trinity College, Cambridge and realizing I was walking in the footsteps of Sir Isaac Newton. I don't mind people calling me a science nerd.

How wonderful to read about an author who obviously has mastered the idea of enjoying writing and life in general! Your books sound fascinating, and I love your approach!

Great interview, Grace & Maria.
Maria, I see I have to read more of your books, especially this one that takes place in England.

Wonderful interview. I visited Oxford many years ago and would love to return. I look forward to "traveling" there with Dotsy from the comfort of my armchair.
The chemistry of color sounds fascinating.

Thanks, Maria, for joining us at WWK. I'm going to Istanbul next year, so your book set there is definitely one I'll be reading.

Maria, it sounds like a wonderful series. I love anything set in England. I've been there several times and want to go back. I'll put your books on my TBO list.

When I haven't been to England for a couple of years, I start feeling deprived. It's not exotic, but to me, it's comfortable. I get the feeling this is how I'd like to live, but I can't afford two homes. I'll start checking air fares again soon. I still haven't been to the Lake Country or to Wales. They are on my bucket list.

Grace, before you go to Istanbul, let's talk. I love to talk about Istanbul.