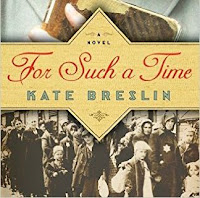 The Romance Writers of America national organization is at the heart of a heated controversy right now. A book marketed in the “Inspirational Romance” category was nominated as a finalist for the RITA (the Academy Award or Edgar of the romance field) in two categories: Best Inspirational Romance and Best First Romance Novel. This book did not win either category, but many members of RWA were upset that it was a finalist.

Here’s why. This novel is the story of a “blonde, blue-eyed” Jewish woman who is imprisoned by the Nazis, first in Dachau and then in Teresienstadt concentration camps, and her “romance” with the Nazi commandant of Teresienstadt, who saves her from Dachau so he can have her as his secretary and lover in Teresienstadt and redeems her by converting her to Christianity. It is supposedly based on the story of Esther from the Old Testament—you know, that same Esther who triumphed over genocidal anti-Semites through connecting with and proudly defending her Jewish faith.

As you may be able to see immediately, there are a few problems with this scenario. 1) This “love affair” can’t be consensual. The commandant has control over her very life and whether she will be tortured, as so many were. There were many women who were coerced under these circumstances to have sex with the Nazis running the camps. We don’t refer to these relationships as “romances” but as rapes. 2) RWA itself states in its guidelines for its awards that there must be a happy ending with “emotional justice” for the characters. Tough to have “happily ever after” (or as RWA calls it, HEA) with the man who has just been involved in killing many of your relatives and friends. Genocide doesn’t lend itself well to “emotional justice.” 3) Given the millennia of forced conversions Jews have endured, before, during, and after the Holocaust, the glorious redemption of the protagonist through her conversion to Christianity while in a Nazi concentration camp is extremely problematic.

Many people have called this novel anti-Semitic. They have a good point. Others have called it offensive. They also have a good point. My biggest problem with this novel is that the author (both of which I’m not naming in this blog since I don’t want to send it/her any more internet traffic, good or bad, but if you want to know more, it’s easy to find if you look at the photo) has been lazy. As my husband pointed out, this situation is very like the similar novels, many of them romances, which I’ve had to deal with where the authors have wanted to use a “Native” character without doing any work to find out anything about that character’s tribe or the truth of their history or experience. Like those authors, this writer has applied every offensive stereotype out there, too lazy to do any real research, and basically dismissing genocide as okay or unimportant.

I don’t believe in censorship, and I’m not trying to say that this author should not have been allowed to write this book. It's not really a question of whether the author should have written the book or not (though I must say if it were me, I would be ashamed to have written such a poorly researched, shoddy thing). Bad books are written and published every day. What I question is the reviewers and judges who decided this was a possible prizewinner. What I question is the 5-star reviews on GoodReads where the readers say they think Nazi officers have been given too hard a time by history and that being in a concentration camp wasn't so bad. (Of 140,000 who were imprisoned in Theresienstadt, only 17,000 survived.)

Romantic Times, the major journal for romance fiction, made it a Top Pick. Library Journal gave it a starred review. The professional writers who served as judges for the RITAs named it a finalist in two categories. What I want to know is how this kind of thing can happen?

What do you think about this situation?
Posted by Linda Rodriguez at 12:20 AM

didn't Esther, representing her people, plead with her husband to spare the Jews? This book isn't based on the Old Testament plot. Accurate research and portrayal of history trumps plot every time.

Yes, Margaret. The whole point of the Esther story in the Bible is that she never betrayed or denied her Jewish faith.

People lack sense and sensibility, RWA included. The MC wouldn't be a hero to anyone Jewish. It's offensive. Sure--publish it, but give it an award? NO!

This is the first I've heard of this book and this situation. My reaction - utter disbelief!
Linda, who nominates books for these awards? Readers? A panel of judges?

I'm not sure, Shari. I think it's the readers, initially, but a panel of judges decides who becomes a finalist--and did so twice with this book.

I cannot believe that a book like this would get starred reviews. How can anyone with an ounce of intelligence or a knowledge of history write such a book. The whole idea of writing a book is, as Shari said, utter disbelief. But then, although I haven't read any of the shades of gray books, I can't believe they're hugely popular, either. This seems so much worse than even those books. But then, they're are people who admire Donald Trump, too.

So, so many things to be horrified over. To avoid repeating important comments already made, I'll focus on this: the Nazi SS imprisoner converts the imprisoned Jewish woman to Christianity. Huh? What kind of Christian can this Nazi be? I'm sputtering, unable to get straight words out of my mouth. What craziness? I've not seen the book nor heard of it prior to Linda's fb post. I hope I never see it. RWA has soul-searching to do, IMO.

This has to be one of the most bizarre things I have read in a long time. The world has truly turned on it's ear. I can't imagine anyone reading this book, no, wait. I can imagine someone picking it up thinking it is going to be a completely different kind of book, I can't imagine someone finishing it. Unfortunately, this seems to be a case of the buzz selling the book. Nothing about it fits my personal criteria for a good romance read!

By the way, I don't want to be seen as slagging romance writers or readers here. I have a lot of friends who are romance writers and very good writers, in spite of the horrible stereotypes of romance writers and readers. They're part of the group of RWA members that first started an outcry about this. So sad to see things like this and the Gray books, tailor-made for use by the people who always try to dismiss all genre fiction as lousy and worthless and particularly the romance field.

I think it's absolutely disgusting. I guess I'd have to ask the age of these people, writer, reviewers and judges. Obviously didn't go to a school that taught WW2, or were to busy not paying attention when it was taught.
Concentration camp, people. Yes, there were some that could be survived because they were force labor camps, but others were nothing but death camps. Anne Frank was on her way to a death camp when she died of typhus.
Ugh, I can't believe RWA.
Patg

Pat, Teresienstadt was a forced-labor camp and still only 17,000 survived out of 140,000. What I love also (sarcasm here) is that this author used documentary footage of Auschwitz (one of the worst of the death camps) in her book trailer. Just found that out. Talk about insensitive. "Yeah, let's use Auschwitz in what's essentially a commercial. I'm sure none of the survivors or their children will mind."

I've just heard from a romance-writer friend (not necessarily a fan of this book), who's cleared up some of the questions we've had about judging and guidelines and noted where I was incorrect. She prefers to be anonymous since this is a hot topic in her field right now, but I'm grateful that she clued me in and allowed me to share with you.

"The RITAs do not call for 'emotional justice.' There are two requirements: 1) Does the entry contain a central love story? 2) Is the resolution of the romance emotionally satisfying and optimistic? ... And as for how the judging works — any book can be nominated by its author or publisher. They send 5 copies of the book. A book is sent to each of 5 judges who HAVE NOT OPTED OUT OF THE CATEGORY, which means that the judging self-selects for inspirational readers. Out of those 5, 3 have to say that it fits those two criteria. Then it's ranked Actual wide reading doesn't occur until the book finals. At which point lots of people read it and the winner is picked, which is why this... didn't win."

She also tells me that "Alexis Hall has an excellent post on the topic of how such a book slips through at http://www.quicunquevult.com/laws-sausages-the-ritas."

The entire awards process of several major organizations are a tad suspect. Some of them end up being popularity contests.

We are running out of the American soldiers from WW2 who saw the camps directly. Some generals, foreseeing the holocaust denial movement, sent all available troops on tours of the camps to stand witness to the atrocities.

We have a short memory.

You're right, KM. I think so many people are ignorant about history in general and that awful history in particular that it makes it easier for Holocaust deniers to gain a hearing.

Incidentally, my friend Laura Curtis just wrote this great blog about this book. She read it and discussed it with a group of friends from various faiths. She gives a great detailed analysis. It's worth reading, though I should warn you that you will gasp and say, "She didn't!" over and over as you read.

First, Linda Rodriguez, thank you for bringing this to my attention --- and thank you for not naming the book, as this would give it undeserved publicity. It is a complete travesty. Not only does this trivialize the horrors of the Holocaust, it is also completely offensive to have a Jewish character "redeemed" by becoming Christian! Oh my! That would be exactly (and I mean exactly) like saying one of the rape victims of ISIS is "redeemed" by accepting their particular form of Islam. No! That would not be redemption! That would be coercion by threat of death -- or torture and death! Not that this makes me an expert on the topic, but I am a daughter of a Holocaust survivor. My grandparents and many other extended family members were killed in the war simply because they were Jewish. I am appalled that this book was considered for an award. And so sad. Again, thank you for this important post.

Denise, that's a good analogy with ISIS. It's exactly the same thing, isn't it? I have heard from other friends who are the children and grandchildren of Holocaust survivors (or as my husband who does research in that area calls them "2Gs and 3Gs"). They have all felt the same way you do. Thanks for commenting.