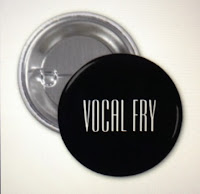 I’m in the process of creating a female character who speaks with vocal fry. But I’m not sure how to translate that to the page. Or if I should.


What is vocal fry you ask?


Technically, it’s vocalization characterized by a low, creaky voice usually at the end of sentences. Physiologically it happens when air pushes up from the lungs causing the vocal folds (tissue on either side of the voice box) to quickly slap together.


Yep, it’s not an exciting description. I would snooze through that passage in a story.


This speech pattern seems to be the trend for upwardly mobile young women in America. Some female celebrities like Kim Kardashian, Zooey Deschanel, and Lacey Chabert have it. Many college-bound women also employ the creak.


One researcher theorized that it could be a way for women to compete with men by using a lower pitched voice which connotes authority. Indeed, younger men and women think that females with vocal fry sound authoritative. However, the creaky voice can irritate older people who believe it distracts from the message. 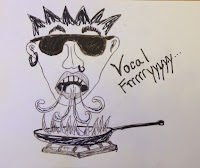 But, wait! Some men speak with vocal fry and nobody has complained or even noticed. This American Life host Ira Glass said that he uses it. So does academic Noam Chomsky. People don’t criticize their vocal quality. (A double-standard? What a shock.)


Perhaps I should create a young male character with vocal fry instead of a female? Hmmm


I’m no stranger to unusual ways of speaking. I developed a New Jersey/Bronx accent with a Southern twang when I was seven years old. (My family moved often.) I’m told it was truly hideous. I remember my usually easygoing father saying, “No daughter of mine will talk like that.” Eventually my parents had me repeat nursery rhymes every night before bed while they corrected my one-of-a-kind accent.


There are numerous accents and dialects in the United States. I love actress Marisa Tomei’s heavy Brooklyn accent in My Cousin Vinny and the soft Southern drawl of television interviewer, Charlie Rose. Their accents are fun to hear but could be tricky to write. If written with a heavy hand or incorrectly, a writer could alienate a reader.


Then there is the rare Tangier Island, Virginia dialect which still has remnants of Old English. Tangier Island in the Chesapeake Bay is believed to have been discovered by Captain John Smith in 1608 and claimed by the British. Because the island is isolated, much of the dialect has remained. Some people believe it’s Elizabethan but others think it’s from the Cornwall region of Southwest England. The islanders also employ “backwards talk” where people say one thing but mean the other. For instance, “she’s ugly” actually means “she’s pretty.”


I wouldn’t even know how to begin to write dialogue spoken by a person from Tangier. Not that it will matter for much longer. Due to satellite and computers, the island’s younger generation is losing the unique dialect and their speech is becoming more like standard English.


Have you heard unusual accents or speech patterns?
Would you write about a character with vocal fry?

I try a very light touch on accents, preferring to allow the reader to imagine a drawl so thick you would dull a hatchet before you could cut through it. I’ll also use a key word or two unique to the dialect. With the Tangier Island folks I’d probably use the “she’s ugly” expression, and then have someone explain to my outsider that it’s a compliment – thereby having the outsider always wondering what a native really meant.

I’ve been reading the 20th centuries “best” 100 stories. In the 1930s they use the accents full out and it makes for very tiring reading.

How interesting that these seem to be female phenomena, or many be we hear it more with female voices? Or do we women just talk more?
In dialogue, I've used that thing where every statement ends with a rising inflection, as if asking a question? Though I did it with a young man to indicate his indecisiveness?
Yes, it gets tiresome!

Good advice about using key words for accents and letting the reader's imagination fill in the rest, Jim. I've slogged through a few stories where the accents were spelled out phonetically. Now I need to figure out how to apply that technique to vocal fry.

The book you're reading sounds interesting.

I sprinkle some suggestions (she recognized Desiree's harsh coastal Georgia accent) but don't try to do it phonetically. Dorothy Sayers did that in Busman's Honeymoon and reading it was exhausting.

You could allude to vocal fry as the voice of Wall Street or "seemed a prerequisite to graduating from a top tier law school."

Shari, my theory is that we hear it more when women talk because our voices are usually higher pitched. Although I was watching TV last night and heard two young males speak with vocal fry.

Thank you, Margaret. I think that sprinkling in suggestions is the best way for me to write about vocal fry. The voice of Wall Street made me laugh out loud.

Kara, interesting blog. I've never heard of vocal fry, and since the only TV I watch is the mysteries on PBS, or Downton Abby, with almost all British accents. I have started rereading the Margaret Maron Judge Deborah Knott series. It's been so long since I started them in the 1980's and eventually I started reading so many other mysteries, so I didn't get to the later ones. Now I want to start reading the latest ones, and so I'm reading the earlier ones to catch up on the story line. She uses the dialect of a N.C. area with some of her characters and does a good job with it, probably because she writes about the area where she grew up and still lives in.

The only deviation I do with voices is some of my characters use incorrect grammar, or certain words or phrasing from people I've heard. Some are more prone to use cuss words, too. Again, I'd hesitate to use much in the way of dialects since I'm writing a series in the area where I've lived all my life. I do have an elderly black woman, and she tends to use words that I've heard used by some older black women, but her family don't speak any differently than most of my characters.

Gloria, you make a great point about reading books by an author who knows how to craft excellent dialect. I think it would be useful to study them. Plus, it's a good excuse to read.

I also enjoy watching British mysteries. When I was visiting a friend in England for a few weeks, I liked to watch a mystery with a female sleuth. But I've never seen it broadcast in the U.S. and I can't remember the name.

I'm with Jim. A few key words or phrases, sometimes a bit of sentence structure (although I find it hard to get Pennsylvania Dutchisms past editors. They are sure there's an error.) do wonders. I definitely don't want to stop the reader and make him/her have to figure out what my characters are trying to say.

I've worked with people with all kinds of accents. I worked in a Maryland alternative high school,and sometimes the inner city kids and the back hills kids had trouble understanding one another, but they got along well, adn as the school year progressed, they didn't have much trouble anymore.

When we moved from South Chicago to rural Michigan, my kids both ended up in speech therapy to erase the regional accent they had picked up.

If I talk to my sisters on the phone, I am usually surprised at first by their heavy New York accents, but as the conversation goes on, I forget about it. In fact, sometimes after I've talked to one of them for a while, my family tells me I've regressed to that accent myself.

Vocabulary of characters is a factor, too. I can hear my characters talking, and it really grates on my "ear" when a critique partner or editor suggests they should say something that seems totally out of character to me.

Thank you for your insight, KM!

I didn't realize that speech therapists helped people erase regional accents. I probably should have gone to one, but I guess my parents were do-it-yourself people.

It's interesting that accents return when talking to someone who has a similar accent. Actually, that could be a scene in a story. A mysterious character's accent returns raising questions about his background...