Author Helene Hanff may best be known for 84, Charing Cross Road, her record of correspondence from 1949 through 1969 with Frank Doel, a London bookseller, which became a successful movie with Anne Bancroft and Anthony Hopkins. Hanff never met Doel, with whom she shared a love of fine books, but years later she was able to visit London and meet his family. She detailed the experience in Duchess of Bloomsbury Street. After dreaming of making the trip for such a long time, she wondered if she would be disappointed. She received the sage advice that she would find whatever London she sought.


I had a similar experience recently when I visited Seattle, Washington, for the first time. I went for a Summit meeting of the National Conference of State Legislatures, an organization that attracted thousands of legislators, staff, lobbyists, and interested parties from throughout the United States and world. I had a marvelous opportunity to network with people who do what I do and learned a great deal. The organizers planned well and treated us royally with programs featuring author Piper Kerman (Orange is the New Black) and editor and historian Jon Meacham (Pulitzer prize winning biographer of Presidents Andrew Jackson and Thomas Jefferson), a tour of the State Capitol in Olympia, and a block party event where we took over the entire Space Needle.


Even with so much to anticipate, I turned to literature and drama to figure out what I could expect from the “Emerald City,” which I knew basically from watching TV programs like Here Come the Brides (a 1968-1970 series about three brothers who owned a logging company and brought ladies from the east in the 1860s to marry their lonely loggers) and Frasier (where the psychiatrist from Cheers became a radio show host and exchanged a bar for a coffee house) and the movie Sleepless in Seattle (with Tom Hanks living on a houseboat and Meg Ryan finding him). (When visiting the State Capitol, I had a déjà vu moment, remembering the episode of Brides where Seattle residents competed with those in Tacoma for their city to be selected as the location of the capitol, only to learn that the choice was Olympia. I did not realize that the Puget Sound extended to Olympia. Our guide told us that in the early days, lawmakers arrived for the legislative session by water.)


A touring company of Wicked had its last performances in Seattle the weekend before my meetings began. I actually had the chance to visit Oz while in the Emerald City and enjoy a dessert named “Wicked Chocolate” (devil’s food topped by chocolate ganache in the shape of a witch’s hat) served at the Carlisle Room across from the Paramount Theatre (a former vaudeville house that reminded me of early scenes in Gypsy where Mama Rose tried to book Baby June and Louise on the Orpheum circuit in Seattle).

I discovered that one of the STAR TREK novels, Ishmael written by Barbara Hambly, featured a time travel adventure that connected characters from the original Star Trek series and Here Come the Brides. Spock, eluding Klingon torture, gives himself amnesia before returning in time to Seattle of 1867, where he meets sawmill owner and businessman Aaron Stempel, who may in fact be Spock’s ancestor. (Mark Lenard, the actor who played Aaron Stempel, also played Spock’s father, Sarek.) Interestingly, a science fiction museum is housed in the Space Needle. My friend author James O. Born recommended it, saying it provided inspiration for his sci fi writing as James O’Neal. Unfortunately, I didn’t have time to visit this trip, but it’s on my list for a return journey.

Leslie Budewitz’ new Spice Shop mystery series takes place in Seattle’s famous Pike Peak Market and provides an excellent vicarious vacation to the city. I began the first, Assault and Pepper, before going to Seattle, but didn’t complete it until I returned home. I found myself retracing streets I had walked and again taking the ferry ride to Bainbridge Island. 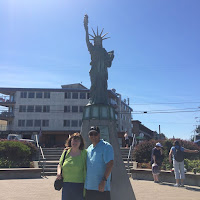 I’m particularly grateful for my friends author Robert Dugoni and his wife Cristina, who grew up in Bellevue near Seattle, taking me on a personalized tour of the city. They showed me the Market with its very first Starbucks (where coffee drinkers still stand in a long line to order from the source), the giant ferris wheel (from which their daughter took some outstanding photographs), and Pioneer Square (where Seattle’s founders built the town after a brief settlement at Alki Point) before we saw the location of the earliest log cabin built in the area then had brunch at a restaurant and walked along Alki Beach. Cristina told me that the term “skid row” originated in Seattle to describe a path along which lumber slid down to the ships for transport. Robert pointed out the office where he first wrote about David Sloane, his lawyer character who cannot lose, featured in five novels (The Jury Master, Wrongful Death, Bodily Harm, Murder One, and The Conviction), and the area where his newest protagonist former teacher and current homicide cop Tracy Crosswhite (My Sister’s Grave) would be living in her second book to be released in September (Her Final Breath). 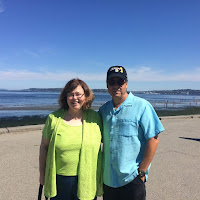 The wonderful part of traveling is being able to experience how the inhabitants of the places you visit live. I’m delighted to have enjoyed learning about Seattle, both from what I have seen and from what I have read. Literature can help deepen a relationship with any location.


Do you find that literature can help define a place for you?

{Thank you to Cristina Dugoni for the photos!)

What a great time you had. Seattle, and indeed much of the state of Washington, is such a great place to live. If I wasn't attached to my own spot in the world, I'd move there in a minute. Of course, Seattle, in particular, is a very expensive place to live. Because my youngest sister lived there for many years before moving to Tacoma, I've visited the area many times. There is so much to see and do there. And did you know, they have more bookstores there and more people who read than any other place in the country? At least that's what I heard at one time, and I don't imagine it has changed that much.

Paula -- Didn't you just have fun! One of the reasons I prefer novels set in real locations is so I can either recall something I had earlier experienced, or learn something new about a place.

And Linda Fairstein for NYC and Hank Phillippi Ryan for Boston

What a great trip. I enjoy finding spots in a city I've read about.Nancy Pickard writes great descriptions of places in Kansas where her novels are set.

I remember the first time I was in London, I was awed by visiting the sites I had read about for years in novels. Castles, railroad stations, even specific streets.

Before we have gone on trips to places where we're not familiar with the culture, my daughter & I have made it a point to read some of the country's literature to help give us a feel. I forget the titles of the books, but some of them stay with me. A story about a devastating Chinese earthquake, where the very practical government allowed people to sign up to be placed in new family groupings (the protagonist was assigned a new wife, a young son and a grandmother, if I recall correctly) and stories of civil unrest in post-colonial Africa (a young woman without a family who is wooed by a pimp: "I will buy you soap. You will be fragrant, like the European women.")

This past winter I alternated between Hank Phillippi Ryan and Ingrid Thoft books, both set in Boston. It was very fun getting a feel for a place I've never been through alternating points of view.

As a Seattle resident, I love reading about my own city. Leslie's inclusion of the ferry to Bainbridge is one of my favorite details in Assault and Pepper.

Paula, add your blog to the list of pieces that take ME back to a city I love! As a young college student from Montana, I fell hard for the Market and the ferries, and it's been great to revisit the city on the page -- and of course, annual trips for research. (By which I mean EAT.) My fictional Seattle Spice Shop is not far from the original Starbucks, and I loved setting a short scene there. Thanks to you and Kate for mentioning the ferry ride -- such an indelible experience!

Glad you had such a wonderful trip -- thanks for letting Pepper and me be part of your travel planning!

Great city, always fun to visit. Of course, WA is so great because it borders OR. :)
BTW, the Sleepless in Seattle house was a floating home. Picky, picky, but there you are. Thanks for mentioning Leslie's book, I'd like to get up there and browse around that area.
Patg

What a wonderful trip, Paula! I love Seattle but haven't been there in a number of years. I'm overdue for a visit.

The science fiction museum in the Space Needle is now on my "must see" list.

What a wonderful trip you had, Paula! I spent some time in Seattle when I visited my daughter and her husband in Tacoma a couple of years back. NOT enough time in Seattle. We saw the same Sci Fi Museum and didn't have time for it. Can't wait to go back and remedy that.

Gloria and Jim, I did have a wonderful time on my first trip to the Pacific Northwest. I thoroughly enjoyed it, found what I had read about, and learned more. I'm definitely ready for a return visit!

Margaret, I agree. I learned about Chicago by reading Sara Paretsky's and Robert Campbell's novels before traveling there.

KM, if you remember those titles, let me know. They sound fascinating. I concur. There is something that you learn in the fiction about a place that doesn't always come through in nonfiction accounts.

Kate, I am so glad I went on that ferry ride. And, it was just like Pepper's journey, going to Bainbridge Island, then returning to Seattle. What beautiful vistas. I see why Pepper uses the ride to think! On the return trip, a young woman with a cello played. Just delightful.

Leslie, truly you make the Market and Seattle characters in Pepper's story. I love the Spice Shop mysteries and look forward to the new one in December.

Pat, thanks. Something else I'm learning about Seattle. Floating homes. I'll have to put a visit to Lake Union on my to visit list.

Kara and Shari, the three of us need to make a field trip. Just let me know when it's convenient for you!

Thanks for sharing your literary adventure. When you mentioned Barbara Hambly I was reminded how much I enjoy her historical mystery series set in New Orleans. Visited NOLA for the first time back in April when my daughter presented a paper at a conference there and the whole family tagged along.