I was perusing Facebook this morning and I spied one of those photo sayings that folks are so fond of posting. This read ‘Surprise me September.’ The lovely fall scene made me pant here in 90 degree Florida and I wondered what the surprise was supposed to be.

When I was little (day before yesterday? Seems that way.), I used to think that the ‘real’ New Year was September 1st and the adults were just too dim to notice. School started in my district the day after Labor Day. The surprises started with the ritual of buying school supplies. Nothing smells better than new composition books and fresh pencils. I still get odd looks in Staples this time of year. Then there was the excitement of new clothes, discovering the name of your teacher, catching up with old friends, and celebrating that your best friend was in your class. Yes, September was full of surprises.

September is surprising me in different ways this year. My wedding anniversary is September 1st. I don’t know why it’s always a surprise. We did everything we could to make it a date we would both remember. But every year, it’s the same story. One of us remembers, usually him, and the other, usually me, scrambles to figure out what to do about it. I lucked out this year. It’s number seven and the gifts are wool, copper and desk sets.  What a great anniversary for a writer. Bring on the desk set, dear.

Then I participated in the Writer’s Police Academy. This conference is in its fifth year. I’m kicking 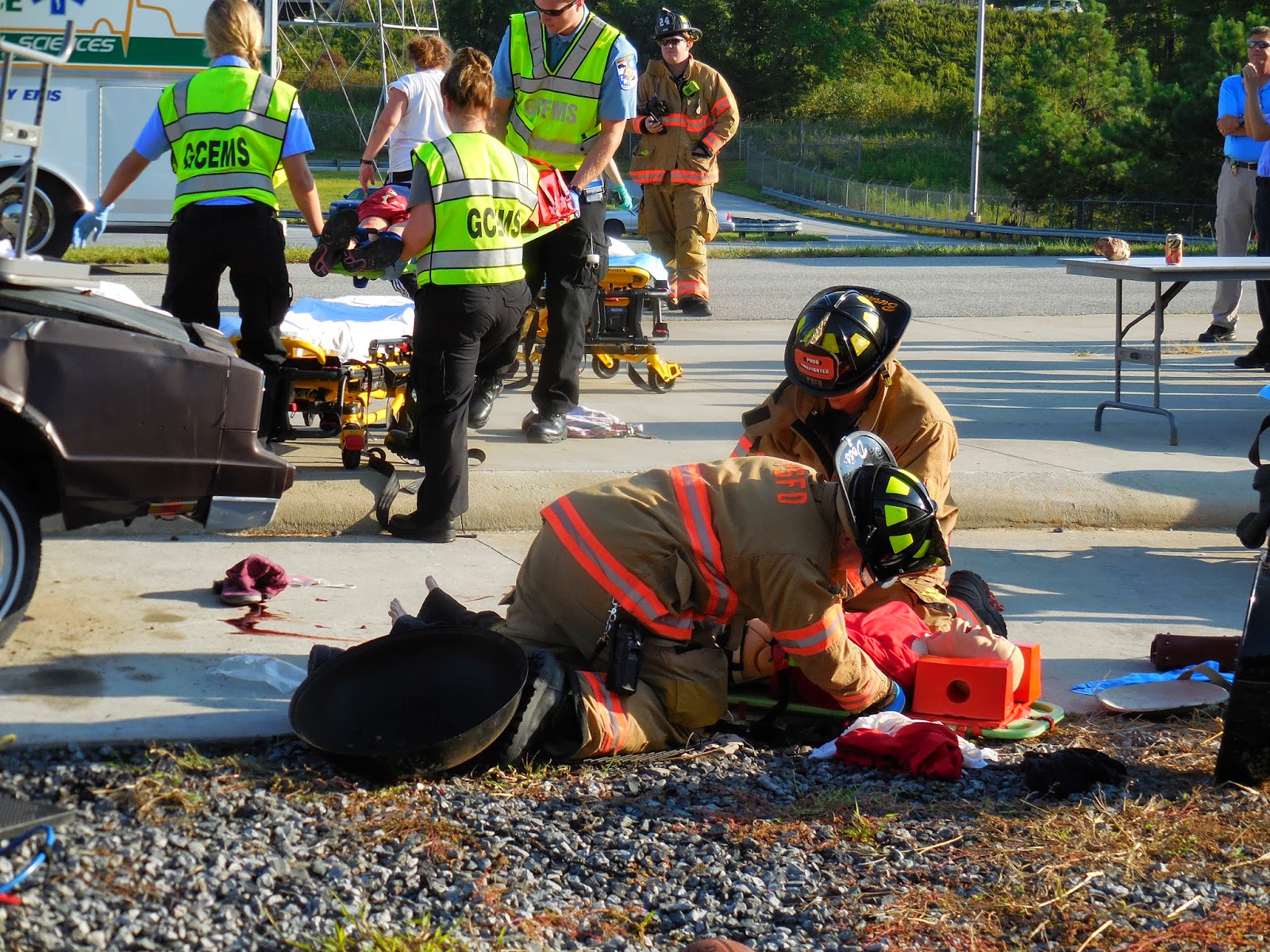 myself for missing the first four and vowing to return next year. WOW – talk about three intense days. The action starts from the second you arrive at the hotel on Thursday and doesn’t quit until noon on Sunday. It’s probably one of the most wonderful and intensive conferences a writer can attend. Very hands on. It’s designed for writers and geared toward avoiding common mistakes – like those you learn from a lifetime of watching TV. The stuff these folks effortlessly know makes a huge difference in the veracity of the words on the page. No more throw the book across the room cop mistakes for me. If I make them, it’s because I wasn’t paying attention.

The WPA surprises for me started at the mass casualty scene the first day of the conference. The woman standing next to me was none other than CJ Lyons. I’m a huge fan, and yes, I told her. Then, while the drama of trauma was playing out before our eyes, CJ gave a behind the scenes commentary from her perspective as a trauma doc. OMG, I was in heaven.

More surprises were in store this month. I was invited to be a guest blogger on this very blog. I’m filling in, although not filling the shoes, for Sarah, who will be back in November. So, I’ll be Sunday’s child for three blogs. At the same time, I was offered a regular blogging spot on Mysteristas. I’d wanted to blog for a while, but the thought of doing one of my own was daunting. These offers are the perfect solution, and a surprise.

There’s still a few days left in this month. Wonder what more surprises September has in store. How about you.  Was your September Surprise filled? 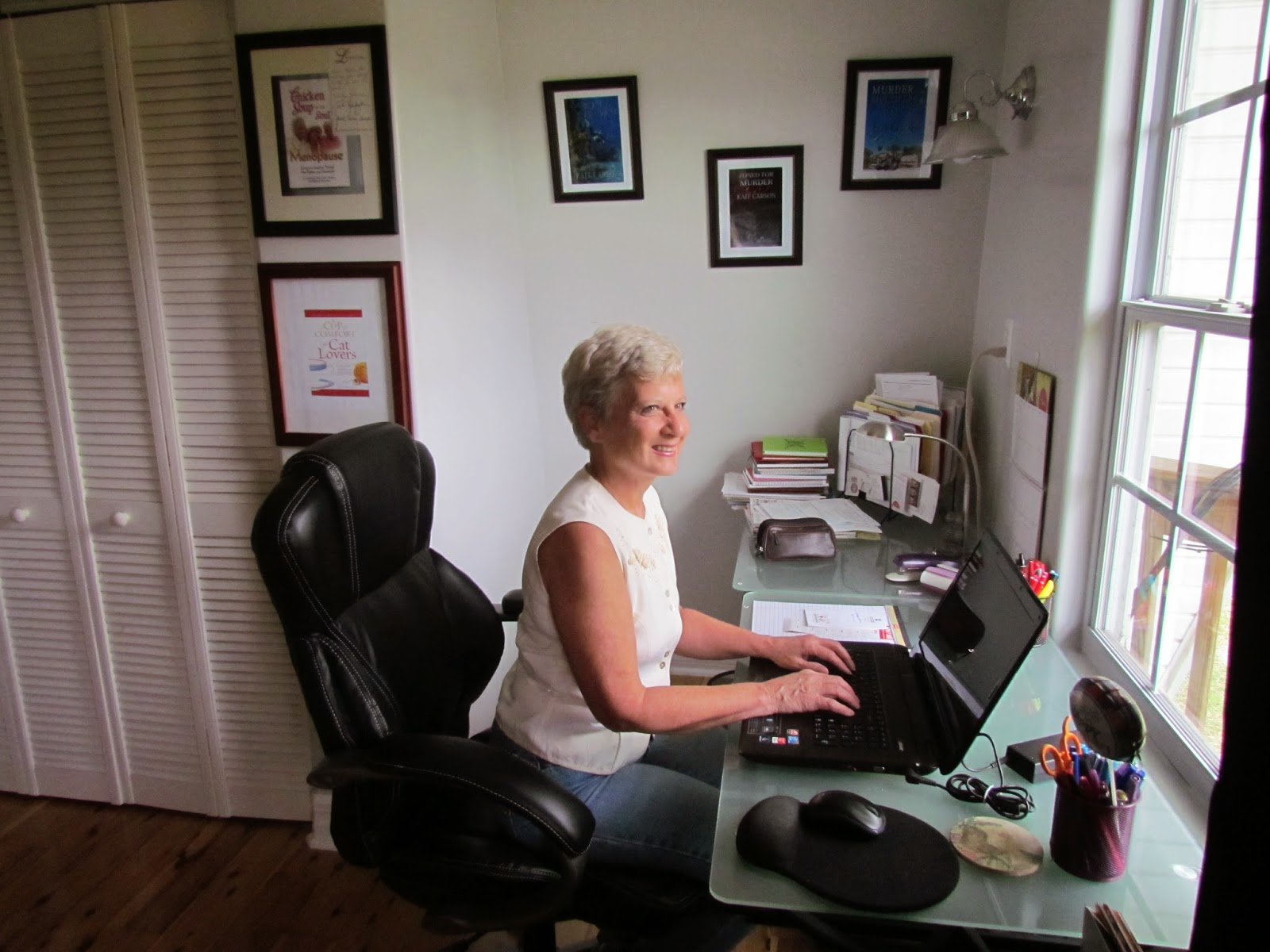 Autumn is my favorite season and up north it starts early. We’re already past peak color and the ground is covered in orange and red and yellow leaves. (Kait says, what is peak color?). We’ve had our killing frosts and temperatures below freezing. This past week was our Indian Summer and my son was fortunate in his timing to see both the colors and enjoy the 70s.

I just (2:00 am) left him at the bus station in Marquette, MI to start his return to the Delaware shore (bus - train - bus).

Yes, my September was a surprise. My husband surprised me by starting a project that had been on our "to do" list for several years.

Out of the blue, he started renovating our front porch, which was in a ruinous state. Of course, the carpentry was only one half of the project. As I was finally accomplishing revisions on my novel (see yesterday's blog) when suddenly, I found myself on an extension ladder painting the new front porch re-do. Once that was completed, we realized that it wasn't just the front porch, but the shrubbery in front of the front porch that needed refurbishing. Which meant that, mattock in hand, I dug out the old aborvitae and yew exposing the root balls. Then my husband pull his truck into the front yard, wrapped chain around the root balls attached to the truck and backed it up. Out came the root balls without my back becoming involved. Yippee! Then I got new shrubs at a local nursery and replanted. It looked much better, and as it continues to grow, will look even better.

And that my fellow writers is one example as to why my novel revisions have taken so long. Of course, after all that, I had to get back to the beach, a much more pleasant way to finish off the month. After this week's company, I'll have five days to myself to work. Hallelujah!

@Jim - peak color or peep color? As a part time Mainer, I can relate to both! Indian summer is always a wonderful surprise. Glad that your son made it home for it. Hope he has a great trip back to Delaware. Bus travel is so much fun. Especially if your driver is willing to double as a tour guide.

@E.B. Congratulations on getting the porch and planting done. That's a great surprise. Isn't it amazing how one project always has unexpected offspring!

We just celebrated three family birthdays this weekend. When our family got together, we had some surprising news from several of the younger members.

Good news for September from my point of view was that my latest mystery novel THE BAD WIFE is selling well to libraries.

I was pleased you included some information about the WPA--I've thought about going, but it sounds very intense.

Thanks for the great blog posting--I enjoyed it.

Nice post, Kait. I've heard of the Academy but haven't gotten around to taking the course. Sounds fun and informative. And I agree, CJ Lyons, what a treat. Happy Anniversary and happy writing. See you on WWwriters.

A September surprise -- a new connection from one sister to another. I enjoyed your post, Kat!

September and October are the best months in Kansas City. The air seems more clear and the colors pop from the leafs.

@Jacqueline - WOW, all of those occasions are cause for celebration in September! OK, are you going to dish on the younger family surprises? You have my attention.

Best congratulations on THE BAD WIFE. Libraries are such a wonderful (and often overlooked) venue.

@KM - I too love autumn. It's truly a beginning for a lot of things. In Florida, it's even the beginning of the growing season.

WPA is a lot of fun. It is intense, but you get so caught up in it that the energy is contagious.

Thank you for the kind words.

@Kathye Definitely consider next year at WPA. It is a lot of fun. Lots of romance writers there too. Meeting CJ was amazing. A true fan moment for me.

Thank you for the good wishes!

@Susan, the sister connection is wonderful :). Thank you for the kind words.

@Shari - Congratulations on your anniversary.

Isn't it funny how those childhood traditions remain with us. It's a good thing I've found use for all those brightly colored composition books they have now. We only had black and white!

@Warren, does anything smell better than the clean crisp air of autumn? It has a winey (sp?) taste to it. No better energy boost. There's something special in the air in the midwest on a fall morning.

I too remember the first day of school, but not with the same affection Kait does. As an army brat, we never knew where we'd be the following year. Thank you for the delightful blog.

@Pastprime Oh no, then you had a surprise every September. We had a number of military kids in our elementary school. I always envied them. They seemed to belong to a secret club the rest of us were excluded from. Looking back, it had to be hard, but to us, they had a glamour.

A very nice post. One that made me remember yesterday and the fun of gathering together school supplies.
And it also made me a little envious of all that you learned at the police conference. Although I write romance novels instead of crime stories, the police can pop up in any book.

@Norma, thank you Norma. A lot of the writers at WPA were romance writers. In fact, some of the lectures were geared toward romance behind the badge, the psychology of cops and the like. Lots of material no matter what the genre.

Thanks Kait. It's funny. I and almost all military brats, were so jealous of people that lived in the town where they were born. I wanted to grow up and marry a farmer and stay in the same house forever. But when I grew up, I realized I liked moving. In fact. at age 58 I started traveling around the world for ten years and settled in Mexico. We returned to the states for medical reasons or I'd still be moving. Maria

@Maria - that is so cool. I always wondered how it looked from the other side! I understand about moving frequently. I have wanderlust in my shoes too.