The Place is the Thing

I first met today's guest blogger, Edith Maxwell, when I was deciding which publisher to sign with. I knew her from the Guppy chapter of the Sisters in Crime, and I was aware she had earlier signed with Barking Rain Press. That book (published under her pseudonym, Tace Baker) has been recently published. (See blurb below for more about Speaking of Murder. She also writes the Local Foods Mysteries series.) 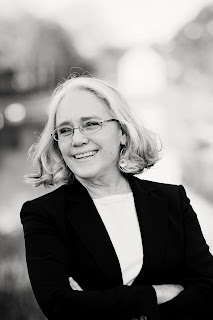 Thanks for asking me over to Salad Bowl Saturday!

I set my new mystery, Speaking of Murder, in the real town of Ipswich, Massachusetts. I lived there for some years and only recently moved a few towns away. It’s a lovely historic town on the Atlantic coast and salt marshes. It’s also a quirky town with colorful characters. My protagonist, Professor Lauren Rousseau, lives there and much of the book’s action takes place there.

Anyone who lives in Ipswich will recognize local landmarks. For example, my daily walk used to be on a hilly road that stretched up and down through woods and past a few houses to end at a creek and the salt marshes. The road is called Labor in Vain Road. Yes, really. The creek is also Labor in Vain Creek which empties into the nearby Ipswich River. The story goes that craft used to wend their way from the sea up the Ipswich River into town. At one point a couple of centuries ago the river began to silt up, and by the time a boat reached the creek, its operator was laboring in vain to make further progress up stream.

One of the residents on Labor in Vain Road is a white-haired gentleman who always wears a skirt. It’s always a khaki A-line skirt that hits him above the knees. He usually wears knee socks with it. I saw him mowing the lawn of the Episcopal church in the skirt. He walked with his wife in the skirt. He even went for a daily slow jog in it. He seems otherwise completely normal, friendly, with a twinkle in his eye. I didn’t include him in the first book, but he might show up in the sequel.

Right over the creek bridge is an antique house that is unoccupied except for a couple of weeks in the summer. I set a couple of scenes in that house.

The oldest double-arch bridge in the nation is the Choate Bridge that spans the Ipswich River in the center of town. It was funded in part by Colonel John Choate. At the opening of the bridge in 1764 he apparently stationed himself on the north side of the bridge on his horse. If it collapsed under the weight of real traffic, he could make a speedy getaway to New Hampshire. The Choate Bridge Pub is a popular restaurant and bar in town, so of course I had to include that in the book.

Until this year, Ipswich also had a secretive cabal of trustees called the Feoffees, who were supposed to manage the oldest land trust in the country. Much controversy surrounded them and I thought, “Here’s a situation where nobody would be surprised if someone were murdered.” After I completed Speaking of Murder, I started the next book in the series. I wanted the Feoffees to be part of the story and I realized I needed to fictionalize Ipswich. I went back into Speaking of Murder, changed its name to Ashford, and altered the names of a few landmarks.

I made sure not to have any crimes committed in public places, even with their fictionalized names. I’d like to be able to hold a reading event in the Choate Bridge Pub, for example, and wouldn’t want them to refuse me because someone was poisoned in a booth or stabbed behind the bar.

What’s your favorite setting for a book? Do you like reading stories set in a place you know, or does it irritate you when the setting is fictionalized and things exactly as they are in real life?

Edith Maxwell is the author of Speaking of Murder (Barking Rain Press, under pseudonym Tace Baker) featuring Quaker linguistics professor Lauren Rousseau. Edith holds a PhD in linguistics and is a member of Amesbury Monthly Meeting of Friends. A mother and technical writer, Edith lives north of Boston with her beau and three cats.

The murder of a talented student at a Massachusetts college thrusts linguistics professor Lauren Rousseau into the search for the killer. Lauren is a Quaker with an ear for accents. Her investigation exposes small-town intrigues, academic blackmail, and a drug cartel that now has its sights set on her.

Convinced that the key to the crime lies hidden in her dead student’s thesis, Lauren races to solve the mystery. Her department chair behaves suspiciously. A century-old boat shop is torched. Lauren’s friend goes missing – and the unsettled relationship with her lover threatens to implode just when she needs him most.

My preference is for actual named cities or towns. It's fun to either know the area or later explore it and be acquainted to the references. That said, I'm perfectly happy to allow the author to augment reality with additional businesses, addresses that don't exist, etc. either to protect the innocent, guilty or for the sake of the story.

For example, in my WIP, Cabin Fever I have the bad guy belong to a church in Crystal Falls, MI. There are no Presbyterian churches in town, so I added one, rather than having the miscreant attend one of the actual churches.

My experience with beta readers is that those who know the locale are delighted in actual references. I haven't killed anyone in an actual business yet, but I might--just to help them drum up business -- everyone's a voyeur after all :)

You've raised an interesting question, and I'm going to be interested in what others think. I may need to reconsider my position.

Edith, I'm reading your book right now - well, not this minute, but it is my bedside book. I'm enjoying it very much and it's nice seeing the actual bridge in Iswich. It's good having you visit us today.

My setting for my series is a fictional town in a real area so I refer to actual places in real towns that are around where my town is located. I've enjoyed creating a town in my imagination and have a map drawn of it so as I add new characters, I also add their homes or places of business.

Ipswich sounds like a great place to live with its colorful characters and interesting landmarks, Edith.

I enjoy reading stories set in real places that I have visited or lived and compare my memories with the author's descriptions. It's also fun to read about new places in a book then explore the area. But I understand the need to fictionalize parts or all of a setting and it wouldn't keep me from reading a good story.

I agree that it is fun to compare my memories with what an author writes about an actual place.

I come from near Ipswich, and it's one of my favorite places in the whole world. Every time I go "home," I make sure I eat seafood in that area and enjoy the scenery. I agree that killing someone in a real place might not be a good idea. In one of my books yet to be released, I have a painting show up in a famous museum in the outskirts of Boston. I described the real museum, but I changed the name because the painting was done by my bad guy. Using real places can be tricky. Your choice to change the name of the town was a wise one, in my opinion. Best of luck with the book, Edith.

I think there are many ways to go when we write about place. Jim, inventing a church in a real place sounds perfect. Can't wait to read the book!

Thanks, Gloria! I agree that a map is a good idea to keep track of everything.

Kate, it is a great place to live. We moved this summer to an equally interesting place with a different array of colorful characters. I'm seized with the idea of writing a historical mystery series - our little house was built in 1880 for the millworkers who worked in the mills down the street.

I love the Linda Barnes stories that are set in Cambridge and Boston because I can recognize most of the landmarks, Warren.