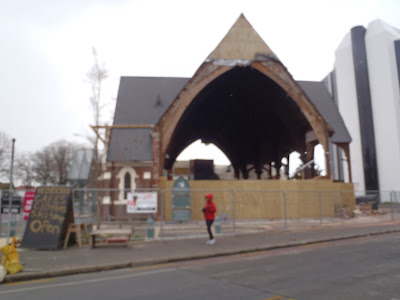 The earthquakes continue frequently. Most are too small to feel. I’ve seen the downtown where several areas are still blocked off. I know the destroyed building only from pictures. People who live here say they are heartbroken to see the magnificent cathedral and other classic buildings fallen, standing as structural skeletons or red-tagged for demolition. Many people are still in temporary structures without bathrooms or heating. Many temporary offices are in tent labeled AFT which stands for “Another Frigging Tent.”

Over the weekend we had the coldest temperatures and the most snow in 19 years. The University of Canterbury, schools and most businesses were closed. Police advised people to stay home. Many of those who did not heed the warning spun and slid on icy streets, driving too fast and recklessly for conditions Locals called this, “The icing on the earthquake.”

Workers told me, “It makes a change from shoveling silt to shoveling snow.” Although some people saw the snow as just one more burden, children seemed to enjoy it, making snowmen and having snowball fights. Other people said the snow renewed their sense of purpose. 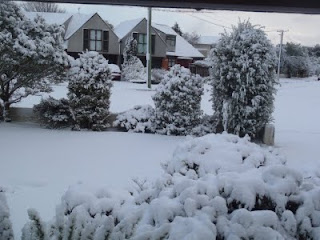 Christchurch is in that long slow painful phase known as recovery. Much that was lost will never return, many tough decisions have to be made and additional losses are bound to occur. At the same time, small victories are occurring. Favorite restaurants and stores are reopening in safer areas. People enjoy rediscovering them. Bus lines are expanding fitfully into their former territory. People share their stories of loss and survival. They also talk about rebuilding and their hopes for the future.

The university has maps indicating which buildings are closed, where to assemble if/when another serious quake occurs and where to find security staff. A bank branch and a bus line terminal once on campus are closed. Some visiting professors cancelled their visits but others have come instead.

You're in New Zealand at a pivotal time, Warren. Without having to experience the horror of an earthquake, you are witnessing the regeneration. Seems that they have a sardonic sense of humour, which will see them through.

There's just nothing you can do about natural events but cope. I remember seeing Pompeii, Italy--the remains of a family encased by lava, the mother and father trying to protect their child within their embrace--for naught.

Human instincts remain the same regardless of time.

When I read about the children who enjoyed the snow and the festivals planned for this year despite everything Mother Nature has thrown at Christchurch, I thought of the quote, "Hope springs eternal."