A BLOW TO THE GUT

I don’t spend much time thinking about what’s happening to my body. Sure, I know it’s succumbing to gravity and the wear and tear of lifting heavy weights during my nursing career. However, I don’t run a daily inventory on aches and creaks. As an RN, I figure I spend enough time looking for symptoms in others without having to search out my own. Although I’m not immune to the inevitable decay that overtakes us all, life is short and I have to prioritize.

At least, that’s how I thought until I had surgery. Suddenly, I became acutely aware of physical sensations, especially pain at the surgical site. If I want to recover and have better function in my leg than I had before the surgery, I have to continue to pay attention to what my body tells me. Well, all that’s okay for a while but I admit I can’t wait to throw away the crutches and embrace again my habitual choice of focusing on feelings and thoughts rather than aches and pains. Anger leads to action and words, sometimes soon regretted. Disappointment leads to a gathering of fresh information and a change in strategy.

No writer wastes experiences. From the unfamiliar world of physical sensations, perhaps I can bring back new physical responses to emotional situations. I tend to focus more on what a person does when confronted with such a situation rather than letting the reader know the physical response of disgust, fear, or paralyzing panic, etc.

After all, if I really found my neighbor dead or badly injured, I’d be more than horrified. So many TV dramas and even printed stories start with a dark and often rainy scene and a corpse with ghastly injuries. Viewers and readers become immune to what is really a terrible experience. We’ve come to realize we’re a violent and aggressive species. Are we setting ourselves up to accept a conti 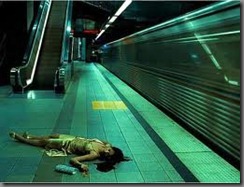 nuing level of violence and brutality in the societies we create?

I don’t know. However, I do know, if a writer finds a novel way of describing a character’s response to death and violence, I’m hooked. I want to continue for the ride with that character. I want to enter a world where people matter and murder and torture are not just part of the scenery.

Although not my favorite feeling, I don’t regard the response of intense disgust and nausea to a cinematic or verbal scene of violence as a bad thing. Since I don’t experience the need to look away with every violent scene, I wonder if a scene creator ever intends the audience to experience extreme revulsion.

Have you read an unusual description of a fictional character’s response to violence and mayhem?

I remember reading (sorry I have forgotten the book title ) a step by step description of a character's changing physiology while he bled to death from a gun shot wound. It was new information for me and I was both fascinated and horrified at the same time.

Wow, great graphic, Pauline--it epitomizes your point by its starkness.

"Death Be Not Proud," the book written by the father of a dying little boy describing his death, for me was the most terrifying and sad book I've ever read. But it was real, and I think that is the point, the difference between documentary and fiction.

Most cosies don't emphasize the death because the focus isn't on it as much as the sleuthing, which is entertaining.

When writing a novel, I think the writer has to be very certain of his motivation and audience. We aren't being insensitive or slighting the violence--we bypass it so as not to make light of those realities. Some writers may include graphics, but those aren't the books I read.

I wonder if the book went into the character's changing sense of his body, Warren. I think there's a point where a person realizes, this is it.

Good point, Elaine, the difference between real and fiction. Sometimes I think people have a problem with that.

That's an interesting question, Pauline, and I don't remember having read an unusual description of a character's response to violence.

In extreme cases a victim might block it out or view it from a distance as if it was happening to someone else but I haven't read books where a character had that reaction.