Recently, I spotted what I thought were repeated punctuation errors in blogs, on websites and social networks. I noticed commas and periods placed outside of quotation marks looking rather excluded and forlorn. After researching and reading an article by Ben Yagoda (professor of journalism and English at the University of Delaware), I learned our punctuation paradigm is shifting.

In the U.S. it has been standard practice to place commas and periods inside quotation marks for approximately two centuries. According to historians, the American style of punctuation emerged due to aesthetic reasons. The comma or period following a closed quotation mark appears to hang off by itself and create a gap so it was changed early on. This style still holds true for the Washington Post, New York Times and most mainstream publications.

However, in some websites, email, business memos, and student papers, the trend is to place commas and periods outside the quotation marks. This is known as British style or logical punctuation. Why is this becoming popular? One theory is that it just makes more sense. For instance, putting a period or comma within a title of a book, “War and Peace,” alters the title. Similarly, if you put a period or comma inside quotation marks, you are changing the quote. A second theory is that logical punctuation is a byproduct of working with computer code. If a comma or period is enclosed in quotation marks around code, it could have very bad consequences.

At this point you may be thinking that U.S. mainstream publications will soundly reject this change and many professional editors would probably agree. In fact, they believe that it’s more likely there will be a separation between official and unofficial practice. Established publishers and other entities will follow traditional rules while more unregulated publications will follow logical punctuation.

Example of American style vs. British style or logical punctuation

But remember that it wasn’t too long ago when two spaces after a period was standard and now only one space is required. Since the internet is global it follows that on-line readers, especially younger ones, will be influenced by what they read and how it’s written. Clearly, language, punctuation and spelling are fluid and continually changing. Ultimately, the U.S. may not fend off this British invasion. 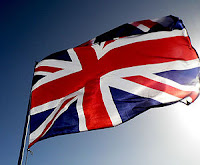 I see you're ready for the British invasion, Warren:)

I support blaming the British for all punctuation and spelling errors, E.B. As my friend in England would say, "That's a fab idea".

I also don't take punctuation too seriously. As long as I can follow the meaning, what do I care if the author uses a dash or a comma?

I worked for BOAC for 5 years in the refunds department and had to write 100s of letters that were typed by secretaries that changed EVERYTHING to the British way. Then I was in a critque group that grammar queens. I'm a very confused person on this subject and I just write it the way it feels best at the time and let my editors catch me where they want a fix.
Both always looks right to me.
Patg

It's nice to know that other people are confused about the rules of grammar too! Three cheers for editors.

I am a BIG fan of logical punctuation because it's, well, logical. Especially when you know that the American rule varies depending on which punctuation mark is involved.

So, it's:
The boat was named "Carefree."

But:
Did you see John's boat, "Carefree"?

And:
"Carefree," John's boat, was moored at the dock. (And that looks really odd to me!)

But:
I can't believe I was invited to sail on "Carefree"!

Sheesh! I know the rules, but I really hate them. The changeover can't come fast enough for me.