Attorney Chris Ewan specializes in the film industry, but he is also a crime fiction author. His first book, The Good Thief’s Guide To Amsterdam, has nothing whatsoever to do with the author’s law profession. However, his main character, Charlie Howard, like himself is split professionally, only Howard writes crime fiction and burglarizes on the side (often to subsidize his writing-such an authentic detail). Howard’s main character, Faulks, is both a burglar and a crime solver—so Ewan creates art imitating art within a fictional life. The circular nature continues until the last pages in which the story catches up to itself and becomes one in the same. But I’ll let you figure out that one.

Protagonist Charlie Howard is writing his book while in Amsterdam. An American man sees Charlie’s author page online, asks to meet him in a bar, and offers him a burglary job. Of course, Charlie denies his B & E sideline not wanting the exposure, but also because he doesn’t know how the American knows of his hobby. But the next evening when the burglary is supposed to take place, his curiosity gets the better of him. He performs the American’s job. What happens next relies on Charlie’s wits, intelligence and knowledge.

Victoria, Charlie’s editor in London with whom he chats on the phone, pinpoints flaws in his fictional plots and in his “real” life crime exploits, helping to keep Charlie safe and able to write another day. Since he uses a fictional author photo, Victoria thinks that she knows what Charlie looks like, but they’ve only talked on the phone and mailed each other manuscripts. The subtle flirtation between them, like many business relationships between sexes, is fun.

The series blends hard crime (plot), humor (internal dialogue) and travel (setting). Ewan knows Amsterdam, giving insight into the language, customs and mental perspective of the natives. His writing style is retro, like a classic fifties crime novel with a European flair. There are three more books in the Good Thief series. Main character, Charlie likes to write a new book in a new location, which explains the titles. A Good Thief’s Guide To Amsterdam was published in 2007 and the subsequent books follow by year, the last released just this month. 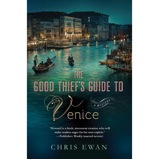 I just discovered this series making me wonder about the effectiveness of advertising, the social media, bookstore placement and all those other promotional tools that are utilized to get the word out and sell books. Even though Ewan won the UK Long Barn First Novel Competition, I wonder if because he is a British writer, his promotion wasn’t as great on this side of the pond.

These are books that you will want to read slowly, but you will be unsuccessful doing so. You’ll finish the book knowing that the author is a clever fellow.
E. B. Davis
Posted by E. B. Davis at 12:14 AM

Email ThisBlogThis!Share to TwitterShare to FacebookShare to Pinterest
Labels: E. B. Davis, Reviews

At last! A way to make a living as a writer and do research at the same time. Brilliant!

LOL, yes Warren, the author is brilliant. I bet he doesn't have to rely on his writing to make a living. I am still bothered that it took me 2 years to notice this series, and I am a British mystery fan.

It's such a shame that there are so many wonderful books we will never hear about. I'm glad you discovered this gem of a series.

And I think that a little B&E to subsidize a writing career is a novel idea!

B&E seems so much safer than working as a hit man. I'm sure those who know the advertising world do better with promotion. James Patterson worked in advertising before he became a full-time writer.
There's basic deception in advertising that is not easy for everyone to grasp and then feel comfortable using. How do you make people believe they're more patriotic when they use toothpaste with red, white, and blue stripes even if they lie on their tax returns and never buy American?