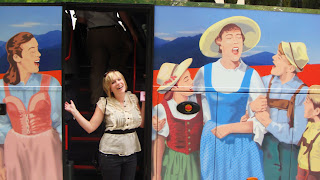 in The Sound of Music during the first line of Do-Re-mi.

The very beginning is not a very good place to start. Not for a writer. I’ve read the answers on-line to a writer who realized the starting point of the work in progress chosen was not the place to start the story. The author apparently had written quite bit past that starting point and did not want to lose all the effort expended.

My response was: Congratulations. Good self-critiquing is one sign of an accomplished writer. Now start where you should have and go at it. I would make a copy of what you’ve written because that’s raw material, which might be useful in some form or another later on. If not, you have the wrong beginning out of your system and you don’t need to make that mistake again. You can go on to make the next mistake. I call that progress. If you were to plot your course, it might look like a drunkard’s path quilt but writing a story is not like plowing a furrow unless you’re writing a manual for something like tying your shoes.

For the upcoming Guppy anthology I reviewed a story that had a clever premise and likeable heroine but the opening was so far removed in time and emotion from the powerful event that set things in emotion that the author had to put sections of back story repeatedly interrupting the flow of storytelling. The present time was spent telling the reader what had already happened until the last few paragraphs. My grandmother talked a lot about what had happened in the past and I found it interesting but this heroine was not my grandmother.

I remember one story I reviewed that began the day after the protagonist got shot. He remembered his experiences, which left this reader distanced and disinterested. Othello does not open the play by remembering that he murdered Desdemona yesterday.

Some time ago another writer asked when to start a story. Helpful responders gave a variety of answers mostly suggesting in one way or another that the story should start in the middle of the action. To each reply the writer protested that readers would lack information they needed to understand. Finally someone (I wish I could claim credit but it was not me) answered if readers needed that much back story, the story should start with the birth of the protagonist’s grandparents and proceed from there.

I have written stories from the point of view of the wrong character, from the wrong spot in the story arc, from the wrong “person” and even started with the wrong murder. But you, dear reader, did not know because I re-wrote them.

What do you do when you realize you started at the wrong point?

Oh, but I can't start until I know what the beginning is. Maybe it's my experience as a journalist, but the beginning is the most important part. Even in fiction writing, otherwise why is so much emphasis put on the first line? This is amazing, Warren, here you are half-a-world away, and still blogging on schedule. I know you are enjoying being in New Zealand.

I'm having a wonderful time in NZ. I agree knowing the beginning is absolutely essential, but in fiction (probably unlike journalism) the art is to start in the middle of the action and then slip the back story in without boring your readers or annoying them by too much exposition in any one place. You slip it in piece by piece.

I started my first novel two years too late, and right in the middle on no action at all. I hope the revision, suggested by a much published author, works better. KB

I usually cut my openings after I finish writing. Setup and backstory get in the way, and I realize later that's what I've done. So I cut it and start later in the story. It takes many rewrites before I find what I hope is the right opening. Sigh.

Openings are hard. I can still be writing the first chapter when I write, "The End" on the last page. My current WIP started out with an entire short story upon which the current story was based. I cut the entire beginning and started the story from another character's POV to avoid making that mistake. It's hard to know when to start because most writers want the backstory to provide an "authentic" basis for the story.

Very helpful post, Warren. Once I recognized my habit of "information dump" at the beginning of my story and accepted it as merely back story for use later on, I was able to set it aside and begin the story like the first scene of a movie - showing only what's happening at that moment. What a difference it made in moving my story forward.

Label what I've got Old_manuscript, then start anew. Depending on how far I'm into it I may rewrite completely or just remove the false start and add the new one.

I just did that with my recently finished historical. I had it starting when the protagonists reached New York in 1887 only to realize we needed to see the voyage to understand that part of the immigrant experience.

I must have done something right, since that book just got me an agent.

I love this post- it IS hard to cut the first part when you start at the wrong place, but so necessary. I'm in the process of hacking one of my babies now and I know it will be better because I did it.

When I revise, I think something has to happen on the first page to interest the reader and it should happen to a character that doesn't bore others. I rewrite the first few pages more often than any other part of a manuscript.

As the author, you need to know backstory, but I agree with the comment about beginning with the birth of said protagonist's grandparents. That doesn't grab me. I don't care.

I read to be entertained, not lulled to sleep. If a book has an exceedingly slow start, odds are very good I'll stop reading at the end of the first page, close the book, and move on to the next author.

A story, however, that starts with something different in the protagonist's day, where life as he/she knows it is about to change forever and there's no going back...well, NOW, you've got my attention!

It is difficult to know the "right" place to begin a story. I usually begin too early then overcompensate and push too far ahead. If I keep writing it will eventually balance out - I hope.

With a lot of my non-fiction writing, I often write the beginning after I've written to the end. Since I've written 4 different starts to my novel, I'm going to mush on and trust that I'll know what to do when I'm finished. BTW - a great tease line about Maria von Trapp - had to look to see what you meant.

Oh must we go to what do you do??? Especially since Warren knows danged well I"m STILL restructuring my novel due to using the wrong beginning point. Yes - I said restructure as in the beginning was the middle and plot point one or so was really the beginning and - just yuck.

You recognized it and now have a powerful middle where most people's work sags. I really miss reading your WIP. If you want to stop by our house in New Zealand, we have two empty bedrooms.

It can take as long to write the first paragraph as it takes to write the rest of a short story. Ditto with a novel. I will never forget starting with the wrong death.
That was a real morass.

Anne, Your idea of a good first sentence is very close to my own