I never knew what writer’s block meant. When I worked long hours and had a young family, I was a weekend writer. Sometimes I’ve belonged to writing and critique workshops and have written short stories or chapters to remain part of the group. Criticize and be criticized was the way to go. I’ve belonged to writing classes where members write to prompts. Whatever the occasion, I wrote. I certainly didn’t produce deathless prose or poetry but I could decide whether to work with it or put it aside because it needed more time in the subterranean caves I call my mind.

However, approximately three months ago I couldn’t put pen to paper for a short story. I had ideas for a novel but was unsatisfied with the way the plot was going and kept scrapping the first forty pages. 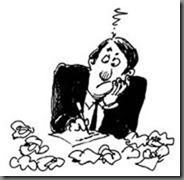 Usually I don’t seriously criticize plot until I have problems with the middle. If I were as much a drama queen as a few of my fictional characters, I could have declared my life over and turned to drink but I decided to immerse myself in my social life and in reading.

A couple of days ago, a past unresolved and toxic relationship was resolved when I dealt with it indirectly instead of trying to confront it head on.

Viola. All those characters that have been walking around inside my 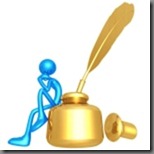 brain, talking and acting out little scenes, for as long as I can remember reappeared, brighter and more active than ever.

Now I have half a dozen short stories in the works. I’m getting them down in longhand first on yellow pads—has to be yellow pads. Then I type up a first computer draft so I can take my time revising and editing. 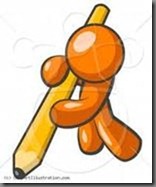 I’ve no idea what causes other people’s writer’s block but I know what caused mine this time.

Do you have a favorite method for escaping writer’s block?

I don't think you can strong arm the muse. I believe you have to persuade her. Sometimes I let work that is not going simmer by itself while I attempt something else entirely. Ray Bardbury's Zen in the Art of Writing works for me to loosen up. General self care, getting enough sleep, exercising, eating well are all worth trying.

It's happened to me, Pauline. Usually, if I don't try to force myself to think--just let it go--an idea presents itself. I don't know how the brain works, but the subconscious mind mysteriously works in the background tying all those thoughts together, and then suddenly one idea emerges.

Sometimes I sit down and draw a total blank. Nothing, not a single word, comes into my mind. Rereading a favorite book that inspired me before can help, or I can go to another story and try. But even that doesn't always work. Some days the dragon wins.