When I was a small child, my mom had to stop me from viewing movies in which dogs died or were lost forever. I cried so much that I had a sore throat for a week. Even today, I listen but look away when, in an effort to raise money for animal shelters, the Animal Planet channel shows an abandoned Golden Retriever, a beaten Yorkie, or a kitten tossed out of a car. 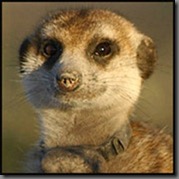 I watched every season of Meerkat Manor and woke up in the middle of the night dreaming about Mozart, a meerkat whose pups were eaten by a rival for leader position. I mourned every meerkat that was forced out of its family to face almost certain death. I mourned the teenage meerkat, Shakespeare, that died defending his mother’s latest litter.

I don’t know why I spend so much time on animal suffering. I’ve lost grandparents, parents, and a husband. As an RN, I’ve lost patients with whom I’d formed a bond.

Animal life seems so precarious. A sand storm separates a baby elephant from its mother and it follows her tracks in the wrong direction. A tiger picks too low a branch and is killed by a lion pride. Nature is indifferent. Fate determines whether an animal lives or 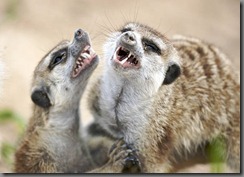 When I studied American literature, I learned about writers who showed characters coping with the indifference of nature and of man. Although the writing is good and the characters memorable, such literature has not remained popular. In action/adventure stories, the protagonist, usually male, triumphs against overwhelming odds. In mysteries, protagonists often defeat evil with their intelligence, persistence, and courage.

While not denying the importance and existence of these characteristics, I wonder how often individuals are crushed by what could be called fate. A family is thriving and then the husband loses his job. It’s a blow but the family carries on with their goals more or less intact until the wife loses her job. A college student about to go to her graduation bends down to stroke a dog and it bites off most of her face. A man on the way to an interview for the job of his dreams is involved in a crippling motor vehicle accident. In countries outside America, misfortune is even more prevalent.

At a sub vocal level, so much still seems beyond our control. I think that’s why I’m so interested in nature documentaries. Animals strive to hold onto life and thrive but they haven’t been able to stop hunters almost wiping out whole species, or the destruction of the vegetation that sustains them, and they can’t do anything about life-threatening injuries or old age.

Maybe animal documentaries give me an opportunity to deal with grief I’d otherwise try to ignore, and maybe I feel drawn to them for other reasons. I wonder why so many editors and publishers state that they won’t accept stories that deal with the suffering and torture of kids and animals. Clearly, both happen. Readers don’t want gratuitous accounts of either but to ignore it all together—is that wise?

For humans too much of what happens to us is outside our control. I am annoyed by people who say, "Everything happens for the best." I've seen too many tragedies to believe that. On the other hand I firmly believe and admire those people who make the best out of whatever happens to them.

I recently finished a book--a humorous novel--that included a scene where a cat gets microwaved. I was supposed to be funny, but I had a hard time getting past it. The book was published in 1990. Would an editor today tell the author to skip the cat in the microwave scene? Who knows?

Yuck. I can't see anything funny about microwaving a cat. Now if the scene was to show something about a character, that might make sense although I'd still hate to read the scene.

Nature is brutal, and humans seem eager to make it even worse. Right now another priceless refuge, Virunga in the DRC (Congo), is set to be destroyed by oil companies. Dead baby dolphins, all conceived right before the explosion and oil spill in the Gulf, all in gestation while their mothers swam in that poisonous water, are now washing ashore all along the Gulf Coast. And all around us, every day, people abuse and neglect the pets that depend on them for their very lives. We make a terrible mistake when we turn away from such things because acknowledging them is painful. We have to be aware. And we have to do what we can to reign in destructive human behavior. Not everyone has the stomach to read about such things, but writers shouldn't shy away from the truth.

I agree, Sandra, we shouldn't avoid something just because it's painful. I hate to think there might be no lions or tigers when my grandchildren reach their teens.

Pauline, I heard a tragic story tonight on This American Life about a released chimp who trusted humans and was probably killed by poachers. I sobbed my way through Gorillas in the Mist. And so much more . . . I can't answer your questions, but I understand them.