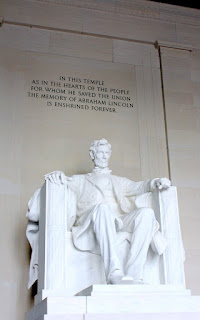 Quite apart from his remarkable political contributions to the United States, Abraham Lincoln was one of the greatest authors in the English language. Largely self-educated, he became fascinated with words at age seven and developed strategies to enhance his knowledge that served him well for the rest of his life.

Even as a child, he had the habit of writing down phrases that appealed to him on any material available so that he could study them and try to figure out what made them memorable. He taught himself grammar and rhetoric.

Lincoln practiced writing. As a young man, he composed many anonymous newspaper editorials supporting his political party and ridiculing his opponents. One editorial was so successful that the politician scorned challenged him to a duel. Lincoln apologized and the duel never took place.

Although he reportedly never read a popular novel, Lincoln enjoyed the theatre, especially Shakespeare. He also read the Bible and literature including Byron and Burns.

For a time Lincoln tried his hand at poetry, with results that did not entirely satisfy him. It may have helped him with cadence and rhythm and the economy of word use.

Lincoln was a skilled orator at a time when political rallies went on for hours and were very well attended. He knew how to relate to a crowd and spark enthusiasm. He also recognized the need to identify that part of the audience to address.

Interestingly, when asked for texts of his oral speeches by reporters, he altered his words. Lincoln knew that the newspaper audience was more general than the group attending a speech and that hearing a speech is a different experience than reading an article.

Lincoln was in the habit of reading both his work and newspapers aloud, much to the irritation of his law partner, William H. Herndon. He explained that he learned more easily if he both heard and saw information at the same time.

Although known for his abilities for persuading jurors as a trial lawyer, Lincoln also wrote effective arguments for the state Supreme Court and the national Supreme Court.

Lincoln’s ability to concentrate was remarkable. According to Joshua Speed, Lincoln’s best friend, Lincoln could be interrupted in the middle of writing a sentence, attend to and resolve the matter causing the interruption and return to the sentence starting where he left off without having to read the start of the sentence.

Another attribute that made Lincoln one of the greatest writers of American English was his willingness to submit his ideas for review and feedback by trusted associates. He was able to incorporate others’ ideas into his own distinctive style. Lincoln sent a draft version of the end of his first inaugural address to William H. Seward.

From written materials in the Library of Congress we know that for the last paragraph Seward suggested:

I close. We must not be aliens or enemies but fellow countrymen and brethren. Although passion has strained the bonds of affection too hardly, they must not. I am sure they will not be broken. The mystic chords which proceeding from so many battles and so many patriot graves pass through all the hearts and all the hearths in this broad continent of ours will yet again harmonize in their ancient music when breathed upon by the guardian angel of the nation.

I am loath to close. We are not enemies, but friends. We must not be enemies. Though passion may have strained, it must not break our bonds of affection. The mystic chords of memory, stretching from every battlefield, and patriot grave to every living heart and hearthstone, all over this broad land, will yet swell the chorus of the Union, when again touched, as surely they will be, by the better angels or our nature.

He was truly a great man who came along at the right time. As a person who spent years in neurology, I know that the brain and language skills are intimately involved. Since he taught himself to write beautiful sentences, he must have been gifted from the start. I think it was a movie mogul who said, if you want to send a message, use Western Union. Clearly, Abraham Lincoln is able to send messages for all time.

How interesting, Warren. I thought I knew a good bit about Lincoln, but I never knew he tried to write poetry.

We think politics is so nasty now, but at least opponents don't duel. Although, maybe that would be a good thing?

Warren, what a beautiful post. Lincoln knew how to reach deep and move people. Not only the words, but the message in that final paragraph (in the blog) is one we should all take to heart. Thanks.