Who is Emily Harlow? 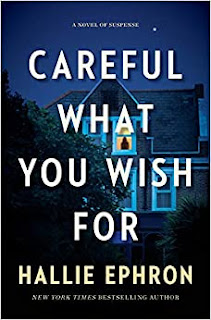 Emily Harlow is the narrator and heroine of Hallie Ephron’s domestic suspense novel, Careful What You Wish For. She is a former elementary school teacher who has joined the ranks of professional organizers. Emily and her husband, a former public defender now in private practice, are struggling to conceive, though their prognosis is positive. They own a home in the greater Boston area and seemingly enjoy a happy marriage. But it doesn’t spark joy for Emily.

We learn about Emily’s clothes: her neatly sorted drawer, where selecting socks was “like plucking a chocolate donut from a tray of glazed.” (p.81). A turquoise jumpsuit evokes memories of the early days of her marriage. Piles of blazers and skirts in the donation pile are replaced by professional polo shirts and slacks for her decluttering business. As the plot progresses, Emily starts to declutter her own life as well as her client’s closets and garages.

Emily’s husband Frank is a hoarder and a yard sale junkie, callous and critical, with staged episodes of tender caring. Emily’s feelings for Frank disintegrate as she’s drawn into a morass of coincidences and gaslighting. He accuses her of planting evidence of theft and possibly murder in their basement and the trunk of his car.

Emily is a sympathetic character, but her willingness to be duped by Frank make her exasperating. Frank demands that she pickup coffee for him (really? He can’t brew his own coffee?) at ten o’clock at night. He drugs her, uses location tracking on her phone, and fills her head with scary what-if legal scenarios, each worse than the last. “The grief Emily felt was for Frank—the Frank she’d married. The one who’d bought his first pin-striped suit for their wedding. Who’d stood stiffly in it, his hair refused to slick down, as they faced the minister. When they’d kissed he’d smelled sweet and musky.” (p 269)

Fortunately, Emily’s mother, Lila, arrives to assist with identifying the rightful owners of stolen books and documents in the storage unit rented by Emily’s client. Lila assesses the situation and gives Emily a jolt of common sense: “From the moment you opened up that storage unit the first time and were astute enough to realize that something was off, there’s been a chain of bad events, one after the other. Your car gets hit. Your client’s husband goes missing. His dead body turns up in that infernal storage unit. I know you feel as if you did something to trigger the chain, but you didn’t.” (p.199)

The two main plot threads merge, with Emily set up as a murderer.

In the end, Emily, with the support of her mother and business partner, emerges wiser and more street-savvy. More likable and credible, finding the courage to dump the stuff that defines Frank—piano guts, old games and puzzles, and empty picture frames.

Readers and writers, do you have a spare skeleton in your basement?

No spare skeletons in my basement - I don't think. My husband is a packrat so anything is possible.

What a great review. Hallie handles these domestic horror situations so deftly her books are a joy to read.

Kathleen, Susan, and Kait, thanks for responding. I enjoy Hallie Ephron's books and learn lessons about my own writing while reading them.