Murder on the Beach? Count Me In!

With any luck, summer brings us opportunities to laze away the sunny days and warm nights. A chance to lounge in a hammock, cool drink at the ready, with a highly anticipated new book. But which book to choose?

Every year, lists of beach reads pop up like dandelions in my front lawn. What makes a story a beach read? When asked that question at the library where I did reader’s advisory, I discovered that most people have their own definition of “beach read.” Some wanted a lighthearted romance. Some wanted a thriller with short chapters, the better to pick up again after taking a dip in the pool. One man told me that his idea of a beach read was a book that he didn’t worry about getting wet. Happily he bought a paperback from the library book sale instead of checking out an expensive hardcover copy of The DaVinci Code.

I defend any reader’s right to define “beach read” for themselves, though I feel a line must be drawn at textbooks on economic theory or heart rending biographies. With these few exceptions, my philosophy is that a beach read is whatever floats a reader’s boat. 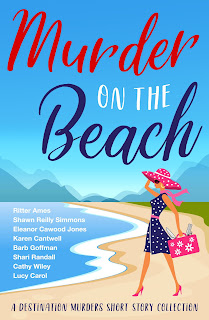 Yet parsing the ingredients that make a book a beach read grew more urgent last year when I was invited to write a short mystery for the MURDER ON THE BEACH anthology. My mission: write a cozy mystery short story set at the beach. The editors wanted the anthology to not only be a perfect beach read, but a beach read set at the beach.

But which beach? Should I add romance? Short chapters, right? The book was for mystery readers, so a tightly written, ingenious plot was still a must. I had to go deeper in considering what truly makes a good beach read.

I had to do what any good librarian or procrastinating author would do. I needed to research, so even though it was December, I went to the beach. In Connecticut.

Obviously, a beach trip in winter is a totally different experience than a beach trip in summer. The elements are the same:  sea, sky, sand. Except the sky was the color of concrete, the water frigid, the sand wet and cold. I watched a man in a wet suit dive in the gray water and wondered if I’d have to call the Coast Guard to pull him out.

I wrapped my scarf more tightly and pulled on mittens, walking the beach, crossing his footprints in the sand as I watched gulls wheel overhead and pondered the challenge of writing a beach read during a New England winter. A gust blew back the hood of my parka and I wished I could escape this gray landscape for someplace warm.

Escape! The word kindled a spark in my mind.

As I typed the first words of the story that became “Footprints in the Sand,” I considered another element of a beach read. Ideally, it had to go well with a beverage, preferably a fruity drink with one of those little paper umbrellas. I rifled through the cabinets, found a pink paper umbrella, and popped it in my cocoa.

What makes a great beach read?

Shari Randall is the author of the Lobster Shack Mystery series. Her new short story, “Footprints in the Sand,” which brings back some favorite Lobster Shack characters, will appear in MURDER ON THE BEACH, first in the Destination Murders cozy mystery series.

Here’s a list of all the MURDER ON THE BEACH stories. Click here for a special preorder price!

A TALE OF TWO SISTERS, Barb Goffman. When Robin’s sister gets married at Lake Michigan, Robin will do whatever it takes to protect Emma’s special day.

FOOTPRINTS IN THE SAND, Shari Randall, a new short story in the Lobster Shack series. A jewelry theft and attempted murder upset the tranquility of Allie’s quaint New England town.

COAST BUSTERS, Karen Cantwell, another short story in the Barbara Marr series. Barb and her friends figure Florida and a quirky chic resort would be the perfect Mom vacation…until it’s not.

BEACH PARTY BODY, Lucy Carol, a new story from the world of Madison Cruz Mysteries. A photo shoot on the beach should be fun, especially when the surf's up. But when someone’s wild behavior turns deadly, the party’s over!

FRUGAL LISSA NEEDS A BREAK, Ritter Ames, the newest short story in the Frugal Lissa series. Life has been anything but a beach lately for Lissa and Abby, so they head to Galveston for a girls’ weekend. All they plan for is sand, sea, and applying sunscreen regularly. Until the dog digs up a dead body.

BAY OF RECKONING, Shawn Reilly Simmons. It’s Sabrina Westfall’s job to ensure that the Miss Crab Pageant, a vital part of the Summer Crab festival on the eastern shore of Maryland, goes well. But what is she supposed to do about the dead bodies?

Preordered and looking forward to a beach read. I'm wondering if you used the beach in winter setting. Sounds very evocative - and cold. Conflict in the breeze.

A beach read for me - someone who lived in South Florida for 30 years pre-Kindle Paperwhite - has short chapters, snappy dialogue, a hint of romance - and murder. Boringly enough - I like my beach reads set at the beach!

For me, a beach read means something FUN that doesn't make me think too hard.

Congrats on the new anthology!

I came late to beach reads--keeping an eye on kids (first younger siblings, then my own) precluded such activities. But when I no longer had such responsibilities, I discovered how lovely it was to sit in the sun, listen to the surf and read intriguing but light novels.

Hi Kait, Thank you! A beach in winter has definite possibilities. For you, too, now that you've left steamy Florida behind.

Hi Annette, Yes, FUN definitely has to be on tap in a beach read!

Hi KM, Yes, watching kids at the beach is the opposite of relaxing. Without responsibilities, relaxing at the beach is so good for body, mind, and soul, isn't it? Just thinking of the sound of the surf lowers my blood pressure.

Beach reads for me mean a paperback I don't mind ruining with sand and salt, and something I can pick up and put down in short stretches (between swimming, walking, boogie-boarding, and napping).

Beach reads to me are exactly as you describe. Pure escapism. Great list, Shari.

Congrats on your anthology release!

I love reading a paperback (no library books in the sand!) at the beach, or in Ohio, at the pool or on my screened porch.

I’ve been trying to figure out if my reading habits change at a beach or on vacations in general. It finally hit me - nope, because books ARE the beach and they’re all vacations. Congratulations on the anthology! Short stories are some of the best vacations ever.

winter or summer at the beach or indoors looking at it from an airconditioned or heated room.... give me a fast paced book, and I'm into a beach read.

Hi Susan, escapism is the name of the game. Thanks!

Thank you, Margaret. And thank you for sparing your library books from a day at the beach. I can remember so many books being returned to the library covered with sand - and worse!

Molly, you're right! A good book is always a wonderful escape!

Hi Debra, you make a good point about pace. A book with luxurious prose and a sedate pace, coupled with the warmth of the sun, might lead to more naps at the beach.

It's been a long time since I read anything on the beach. But if I did, it would be something fun. Life is too short to read dreary.

Thanks, Korina! I agree!

Thanks, Jenni. Same here - I always have a murder mystery in my beach bag!

Hi Grace, we have to get you some beach time!

Can't wait for my days on the beach via Murder on the Beach!