Coming Home from Margaritaville By E. B. Davis

After a series of rejections and a real-world physical move that kept me off-kilter, I’ve started writing again. I must have an on/off switch. Where it is located is a mystery. My head? My heart? My spirit? My imagination? Why the switch moves from on to off and back again is also a mystery. Some writers seem not to have a switch, and they keep writing like a Pony Express horse striding for delivery. Are the racehorse authors mostly successful or are they impervious to rejection?

The impetus for my writing is an anthology where I want to place a story. I’ve had success with the editors before. What I like about anthologies is that often a theme is stated. Writing to themes provides a challenge for me. Many writers say they must write every day. I’ve found that unless I have an idea and a notion of where I’m going in a story, there is no point to writing daily. Mediocre writing occurs without a worthy character, the spark of theme, or the progression of plot. Unless I want to ponder my navel and spout adolescent angst—been there done that sort of writing when younger—writing without a goal isn’t worth the time. My journal type writing I’ve thrown out in fear that my children may read it after I’m dead and wonder if their mother was a closet airhead.

I got an idea for a story fitting the anthology’s theme. I wrote it and wondered if I hit the mark. When a beta reader also wasn’t so sure, I thought again. I wrote a second short. I knew I hit the mark, but then I also realized the idea had sprung from an example provided by the editors. Was that too unoriginal since I’d borrowed the premise from them? I wrote a third story. Like Goldilocks, the third hit the mark—just right. At least I think so—but so often hitting the mark is in the eye/mind of the judge. Writing isn’t an objective business. I get that. I do, really.

But what happened here was that I started writing and couldn’t stop until I thought I had it right. I probably wrote more in a week than I had continuously in three years. Doesn’t seem like much, but to me it made all the difference because it also sparked ideas for more short stories and longer works, perhaps a series. The experience also reassured me.

The problem with novel writing is not knowing when I get it right. I can read other authors’ books and know, but with my own—I don’t. While the goal of writing to theme provides incentive, one week of writing does not consume so much time that I feel overwhelmed by it. Novel writing takes months, and sometimes years. I lose track of the goal and get bogged down. In writing short stories, I know where I’m going—I have a theme and a goal. When I get the idea, there is a certainty of the beginning, middle, and end. With novels, I now know I’m not a pantser even if I’ve written two novels that way. I can’t anymore. The outline is at least a road map, a compass when I get lost and beleaguered.

Perhaps having success with short stories also compels me to write more. While I’ve met only rejection in novel writing, a certain fear makes me brake. To write, I must have a Rhett Butler attitude or I won’t do it. If I care, I give power to those who judge. It’s a defense mechanism for foisting off rejection and keeping the cojones in place. Don’t let them take that away from you. Or, stated in a much nicer way from a young and successful artist:

“If they don’t like you for being yourself, be yourself even more.”

How have you tamed your reaction to rejection?

Do you think success breeds success and failure breeds failure?

Do you write every day? Is it necessary? 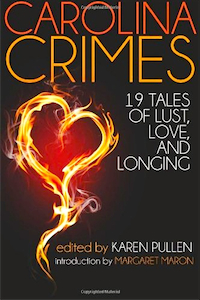 Nominated for an Anthony Award in 2015

If I make the cut for the next anthology, I’ll post it on the WWK Marquee.

Fingers crossed they choose your story -- and what are you going to do with the other two?

You've nailed one big problem with writing novels on spec: success is not guaranteed and there are several places in the road to publication where we can convince ourselves the pile of garbage staring us in the face has no chance of becoming something people want to read.

And you either power through those lows or you're stuck in fear of them. I often wonder if the Harper Lees of the world with only one novel published in their lifetime and only one other in their files ran out of ideas or ran out of courage.

That's early morning speculation and now I need to get to doing some rewriting.

Most rejections don't slam me as hard as they used to. Most. Not all. And when I do get rejected, I bounce back faster. As for writing every day, I do write every day...except when I don't. I know I'm more productive and jump back into the story faster when I do, but sometimes I need to just escape and refill the well. I've learned to give myself permission to do that.

Good luck with the new story!

good luck on your story!

Fingers crossed for you! You've given us a lot to think about today. I wish I wrote every day - life gets in the way much too often - and I've found that once I'm in a story, I don't want to get too far away from it or it takes awhile to get back in.
Rejection never feels good, but time does give one perspective. As a friend says, "you can have the sweetest peaches in the world, but if someone doesn't like peaches they won't like yours." That said, publishing is a crazy business and I've stopped expecting it to make sense. Easier that way.

Congratulations on getting back to the writing, E.B. Good questions, too. If I have tamed my reaction to rejection - big if - it's by remembering that in writing and publishing everything is subjective and not personal. Are success and failure purebreds? Probably not. Do I write every day? With a contract and deadline in front of me like a brick wall and getting closer every day, hour, minute, you better believe it. Otherwise - there's a whole world out there waiting to spark our imaginations, so I like to get out in it.

We all deal with these issues in our own way. Being true to yourself is perhaps the most important thing to remember. That's who you have to live with.

It's impossible not to take time to lick your wounds after a rejection. I feel the same as you about the fun challenge of writing toward a theme. I've had two short stories accepted into anthologies, but since writing my book series, I have not felt like I could take the time to work on more short stories, as I'd like to do. I feel like that takes daydreaming time first to come up with an idea, and all my thoughts are occupied by my book... and its deadline. Good luck with your latest story!

Fabulous, Elaine. I’ve read all three of your stories and can attest to their quality. As for writing daily. Yes, I do. Well, maybe not write, but writing related such as editing, outlining, brainstorming. That said, I recently took a week off. The first since I became a full-time writer. I came back to the page with renewed energy and curiosity. The best of all worlds.

Oh, as for rejection - well, one of my best friends introduced me to what she called the single girl's battle cry to describe her dating life. NEXT!

So glad you are writing again. Rejection simply means (as someone explained to me), revising and sending the piece out again. Of course, there were times that that meant years passed....glad you aren't doing that! Fingers crossed on the anthology.

I, too, am glad you are writing again. And I can't write every single day because other obligations get in the way. Today is a prime example of that. Anyway, I think teaching high school literature was a great prequel to writing for publication. My students' reading habits were so subjective, based on their lives and interests, that I became used to the fact that given a book to read, half my class might like it, two or three would be thrilled, several would hate it. Same book, different expectations. Publishing is like that too. It takes a lot of luck to see your work reach the hands of the perfect person who would love it as you do.

Elaine,
I'm glad you're writing again. Many years ago I used to write short stories. Now that I've been writing novels for so long, I feel that I've forgotten how to craft a short story. I love writing novels, especially series, about my characters whom I know so very well as they develop and grow while having adventures. How interesting that you naturally turn to short stories and I turn to novel writing. I love the variety of choices that writing offers us: poetry, memoir, fiction and non-fiction and more.