Leaving the Scene (May 17 from Down & Out Books) is my sixth Penns River police procedural. The seventh book in the series is in final revisions, and I have notes for two more. Well into the series with no end in sight, I am acutely aware that a series this long can go stale if the author doesn’t work to prevent it. 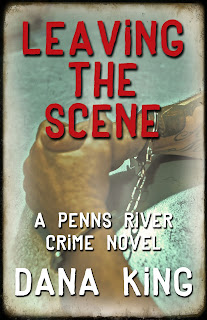 What’s a writer to do in this situation? I doubt anyone has a definitive solution (I know I don’t), but here are a few things I do in an effort to keep the stories fresh and the telling varied as the series progresses.

What I call Penns River is an amalgam of the three small Western Pennsylvania cities I grew up in. I haven’t lived there in years, but my ties to the area remain strong through Facebook, the web edition of the local newspaper, regional websites, and, until recently, several trips a year to visit my parents. The Beloved Spouse™ kids me about my accent (“warsh” slips into conversations more as I age), and my allegiance to Pittsburgh sports teams remains undiminished. I still think of myself as a Pennsylvanian even though I moved away when I joined the Army in 1980. Writing about the area is, for me, the ultimate example of “write what you know,” and there’s always something else to remember.

Because Penns River is based on real towns, the local news is a constant source of material. Among the events I pulled out of the newspaper for Leaving the Scene are:

o   A naked man (well, he did have one sock on) covered with cooking oil.

A previous book depicted a young man shot in the buttocks by his father to conclude an argument that began across town over who ate the last of the chocolate chip cookies.

I couldn’t make these things up. I need only find entertaining ways to describe them. So long as things continue to happen in the Alle-Kiski Valley, I’ll have fresh material.

Primary protagonist Ben “Doc” Dougherty isn’t going anywhere; everyone else is fair game. Leaving the Scene opens at the chief’s retirement party. In addition to his replacement, a new patrol officer comes to town, and one that’s been around for a while gets a promotion. I’m also not above killing a series regular. I’ve done it before, and I’m in the process of doing it again.

I look for different ways to tell the story. Leaving the Scene, for example, has no chapters as such. The point of the book is to show how day-to-day events can sidetrack even a homicide investigation, so I broke the book out by dates, and time of day, to keep the reader aware of the passage of time and the constant interruptions.

Changing the scope also helps. Some books reflect national concerns viewed through the lens of a small town. Some are straight-up mysteries. A few are bits of both. Pushing Water was primarily about an active shooter investigation, with a secondary story that involved a Mountie in pursuit of a Canadian fugitive. Leaving the Scene is all local. The work in progress focuses on what happens after a Black officer shoots and kills a white supremacist.

This is why I’ve spent more time on Penns River than Nick Forte PI stories lately, even though Forte has earned me a couple of Shamus Award nominations. There’s always something new in Penns River, and those new stories make me look for the best ways to tell them. Forte lives in a somewhat more stagnant pool from which to draw ideas. I have one I like on the back burner, though, so another appearance may be imminent. So long as it’s not too much like what’s come before.

Leaving the Scene is Dana King’s sixth Penns River novel. He also writes the Nick Forte private investigator novels, two of which earned Shamus Award nominations from the Private Eye Writers of America. His work has appeared in numerous anthologies, most recently The Eviction of Hope. You can get to know him better on his website, blog, Facebook page or Twitter (@DanaKingAuthor).

Dana King’s Leaving the Scene delivers the goods—a procedural packed with smart dialogue, sharp plotting, and a vivid humanity that brings to mind the best of McBain, Wambaugh, and Connelly.

My better half just read the 52nd novel in JD Robb's In Death Series -- so I wouldn't worry overmuch about books 8 & 9 as long as you have ideas for good stories.

Congratulations on your new release! I can think of other series with more than ten books. Why not write as long as you have new ideas?

Congrats! I agree that small towns have fascinating stories that are often stranger than fiction.

Congratulations on a new release and a long running series!

Nice post, thanks. Reminds me of what the funny, fantastic Carl Hiaasen told us one afternoon: You can't make this stuff up. He was a columnist for the Miami Herald and got ideas for his books off the police blotter. What happened to the guy covered in cooking oil? Back in the day, the streakers chose Mazola.

Your awareness of the need to keep the series fresh goes a long way to keeping it that way.