At the end of March, I wrote about the unexpected turn taking us from our long-time home in Tallassee, Alabama toward the Birmingham, Alabama area. Writing this towards the end of May, I am both impressed by our accomplishments and overwhelmed by what remains.

First, an update. Since April 20, we sold our house (twice), had one sales contract fall through, bought our new house (twice—we had to withdraw the first offer because of the first sales contract) and learned that with a little prayer and great mortgage company, it is possible to apply for and receive a mortgage loan in 19 days. I gave away 14 boxes of books to the local library in Tallassee, which was traumatic. We packed our old house ourselves in less than 19 days and we moved out of it three days ago, and into our new house yesterday. We learned Saturday night that you can run a Sleep Number bed without internet, and I learned (Mark already knew) that Dish TV would work without internet. I’m still looking forward to the arrival of the internet man tomorrow morning, though. I’m using my telephone hotspot right now, and it drains the battery.

You’d think I’d be feeling a great sense of accomplishment given all that we’ve gotten done so far, right? I would, except for the following: 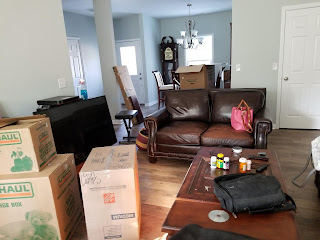 Those of you who have moved before probably don’t think that looks too bad, as far as unpacking goes, but, like Bluebeard’s Castle, we have a room with a hidden secret.
\ 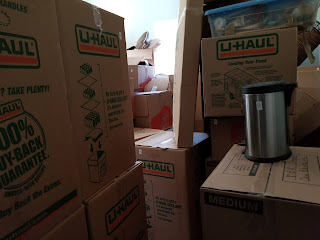 We had the movers store every box possible in the spare bedroom. Which was a wonderful idea until we discovered last night at nine that we couldn’t remember where the bedroom TV cord was packed. After about two hours of looking, we gave up. (We found it this morning—in one of our suitcases.)

This is the first move for both dogs. They seem to be taking it well so far.

Darwin, who we think is 15 or 16, wondered why I was interrupting his nap for this picture. 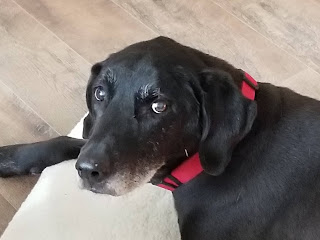 Daisy, about 2, runs around on high alert, ready to sound the alarm should anything appear out of place. Obviously, the pillow and CPAP hose are highly suspicious objects, even though she saw the same things in the old house every day. 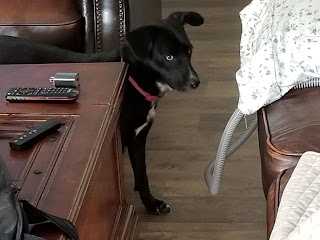 The good news is that it truly is downhill from here. Even though we have a lot of unpacking to do, we get to choose what and when we unpack. How will we know when we’re finished unpacking? When we reach the last box that gets moved from one place to another and never quite gets unpacked until the next move. We found the last box from our move into our Tallassee house (the move in 2006) in the coat closet while we were packing for this move. The box was still packed, but it had at least been opened.

And so it goes…

The only good move is one that is complete. You're getting close. Good luck down the final stretch.

I moved in November, and still haven't finished unpacking. Or furnishing the new place.

Years ago, we established a rule of thumb: if it wasn't unpacked from the last move and we didn't miss it, out it goes. The only thing I regret having discarded in that manner is my old leather jacket with the biker colors. But then, I can't imagine using that ever again.

After reading this, I think I need to take a nap. Good luck with your unpacking.

Congratulations on the move!

I feel your pain. We came to Maine in July and still have a basement room and a garage filled with boxes. Hubs is gradually going through them. The living rooms are finally set up. Take your victories where you find them.

KM, I thought I was the only one with the unpacked and out move. When we moved from Virginia we found a box from Florida and I heroically tossed it unopened. Now, 41 years later, I still wonder what was in that box!

Congratulations on the move, Nancy! Best wishes with the boxes. As a military spouse who's moved a few times, I feel your pain. And your new sense of zen acceptance. I have boxes that haven't been opened in several moves. Will I toss it? Will I open it and find treasures? Or my daughter's collection of Happy Meal toys? (true story) Good luck and happy new home!

What a job, Nancy! I applaud your effort and accomplishment and steadfastly refuse to think about our couple of (more?) boxes on the shelf in the basement still unpacked from the move in 2002.

Good luck unpacking! I hear you about that one box that never quite gets finished...

British Dissertation Consultants offer you with the highest quality of Medical Dissertation Services to undergraduates, Master's and Ph.D. students.