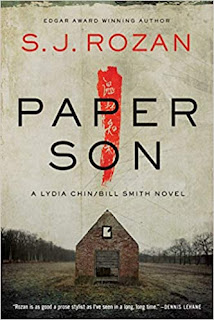 Six years after our move from Atlanta to Cincinnati, my husband and I headed south for our son’s New Orleans wedding. As we strolled down a quiet street in Natchez, admiring the crepe myrtles and antebellum architecture, listening to a mockingbird chortle a medley of songs, we looked at each other and smiled. We were back in the South.

I was curious how S.J. Rozan would handle Lydia and Bill’s trip to the rural Mississippi Delta in Paper Son, home to a branch of the Chin family Lydia had never known. Lydia’s mother considers a family member in trouble as a compelling reason for Lydia’s trip, accompanied by her P.I. partner Bill Smith. As it turns out, Bill grew up in Louisville, and despite his years in New York City, can assume a southern accent when needed. He reassures Lydia, who is contemplating the barren cotton fields: “One thing about the South. Generally, even when you get what you expected, it turns out not to be what you thought.” (p.24) From sweet tea to moonshine, Lydia’s expectations of life in the South for her Chinese “kin” are nothing that she ever imagined.

Lydia and Bill become embroiled in solving the murder of Lydia’s distant cousin, locating the cousin’s son who is the prime suspect, snooping around a small town devoted to meth production, and rescuing a Black paralegal from the clutches of Fisheye Ferguson and his sons. Detective Lucknell, who comes to appreciate her meddling, assures Lydia “When you’re up to your neck in horseshit, probably there’s a pony around someplace.” (p. 179)

Lydia learns about paper sons—Chinese young men who faked membership in an established Chinese-American family to gain entry to the United States after the Chinese Exclusion Act of 1882. Some settled in the Mississippi Delta and became grocery store owners and farmworkers. In the transition, these paper sons lost their family names. Lydia describes her cousin, Reynold Tam, who is running for governor: “…under his tortoiseshell glasses, and with his bronze skin and the curl in his salt-and-pepper hair, it was hard to tell his half-Chineseness right off the bat. Though the bronze might have been not from the sun of the American South, but from the genes of a southern Chinese. We Guangdong peasants are too dark to fit the moon-skinned northern Chinese standard of beauty.” (p.77)

Chinese schools, inter-racial marriage, and university educations. Crystal meth and computer-based sports betting. The old ways are disappearing. Lydia’s Cousin Pete tells her, “Chinese and Jews aren’t the only folks who weren’t white or black and came to the Delta. Lots of Italians came a hundred fifty years ago, and a whole bunch of Syrian and Lebanese came in the sixties, after some war they had over there. They set up restaurants. Not many left, same as with the Chinese grocers, but out at Walid’s, you can still get a great plate of kibbe and grits.” (p.185)

Rozan does double-duty with Lydia’s descriptions of the delta, melding physical details with the racial overtones that pervade the culture: “Not much like the Mississippi of my mind, all slow, hot days with flower-scented air, cicada-filled nights, big houses with deep verandas, tarpaper shacks in the cotton fields around them. But then, that Mississippi, the product of movies, TV, and high school history classes, was entirely a story of black and white. Yellow had never been mentioned.” (p.94)

Lydia’s description of a jazz joint is lyrical, grounded in her own point of view: “Big Bone Stafford’s deep voice boomed, whispered, howled, and purred. Angel Sewell’s drums gave us a soft swishing like rain in the cottonwoods, sometimes a steady beat, all the way up to a thundering pound. The music didn’t mean much to me—classical, jazz, and blues are Bill’s department.” (p.108)

The flood of 1927 changed everything for the Tam family. Secrets are revealed, the gubernatorial candidate tells all, and the real murderer and his motive are revealed. Lydia [thinks] “about what that bad time would look like: people standing on the levee, maybe in the pouring rain, or in the deceitful sunshine because the rain was upstream, watching the water just keep rising. Running down, grabbing family photos, throwing armfuls of clothes into their cars, their pickup trucks, facing away. Or hoping the levee would hold, until it was too late, then climbing out the windows onto their roofs to pray. And what had it been like in 1927, when cars and weather forecasts were fewer, the levees lower, and the flood epic?” (p.165)

S.J. Rozan seamlessly weaves memorable speech mannerisms of the area into the dialogue: “Well, butter my butt and call me a biscuit!” (p.132) “That boy’s lower than the belly on a beat-down rattlesnake.” (p.57) “And I gotta admit it was a hoot to see Johnny Ferguson not knowing whether to scratch his watch or wind his behind.” (p.201)

The plot flows like the mighty Mississippi, through its winding course, steady, with undercurrents and shoals, as Lydia and Bill search for her missing cousin and his father’s murderer. They find an old woman, distant “kin” in a nursing home, who tells the real story about the Tam family and the 1927 flood. With the no-good Ferguson family behind bars, peace is restored to Clarksdale, Mississippi.

Readers and writers, have you read a book which completely immerses you in a place, time, or setting?

I enjoyed the Paper Son when I read it a year and a half ago. James Lee Burke sucks me into the bayou country so well I can smell it.

Wonderful review, Margaret. I had started reading the Lydia Tam series a long time ago and although I loved it, I somehow never got back to it. The time has come.

Jim, I have the same experience with JL Burke.

Kait, I enjoyed Lydia's trip to the Mississippi Delta.

I love books that completely immerse me in time/place. Two authors who come to mind are Mary Stewart and Morgan Llewellyn. Both of them write of far-off places, but when I look up from reading their books, I'm always surprised not to be in the wilds outside a castle.

I haven't tried this series, but I will, and look forward to visiting the bayous.

I've read several in the series, and enjoyed them because of their New York settings. I was a little leery reading this change of pace, but it was so well done that I hope she has the characters travel again.

Debra, I understand. Rozan knows Lydia's beat in Chinatown so well, as she does other boroughs, it's hard to imagine Bill and Lydia operating in the rural South. But she pulls it off in fine form.

Wonderful review, Margaret. You've convinced me to read the book. Thanks!

Enjoy, Molly! I had visited the area (greater Oxford, MS) and was curious to read Rozan's version.

Mary Alice Monroe on the beach with the turtles! Amazing review, Margaret.

Elaine, I looked up the Monroe's Beach House series. I'll have to try it!

Thanks Susan, Rozan gets it right, including humor.