Writing Down the Memories by Susan Van Kirk 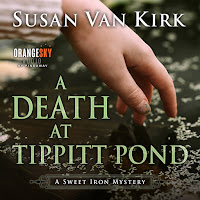 At the end of March, my novel, A Death at Tippitt Pond, will come out in an audio version. I’ve never had an audiobook of my novels, so this will be a new experience. Those of you ahead of me in this must forgive me if I feel a sense of wonder in thinking about my words coming out of a professional reader’s mouth. Tingles. Excitement. Beyond my imagination.

As I think about that launch, my mind wanders back to the research I did for this book, which takes place in the present, but circles around a murder case of a teenager, Melanie Tippitt, in 1971. The backdrop is filled with the pop culture and clothing that went with the late 60s and early 70s. Through photographs, I was transported back to a time I had lived through and a small-town life. It was a walk down memory lane, filled with nostalgia, even though I was writing fiction.

Here’s Elisha Davis, a local realtor in the town of Sweet Iron, telling protagonist Beth Russell about another character, Melanie Tippitt, whose bedroom they are exploring in the Tippitt mansion. The scene takes place in the present day, but they’re talking about the early 70s. Beth has just asked Elisha about her memories of growing up with Melanie Tippitt, and what she was like:

“Our sophomore year. The night she became the queen of the May Dance. She wore the most beautiful pink formal with white elbow-length gloves and a glittery tiara. Afterward, we sat on the football field bleachers, our shoes kicked off, and talked about where our lives would go. She wanted to travel to the Far East—India, I think. She loved geography, travel. She told me she wanted to graduate from college and go see the world. Me, I thought I’d marry a handsome man and live happily ever after. You know, typical teenage stuff. Silly. But I believed she’d make her dream come true—she was that kind of person. She lived a charmed life…Funny how life never quite turns out the way you think it will.”

Melanie Tippitt and her brother Jeff lived in Sweet Iron during the late 1960s and early 1970s. We would call this time “history” now, but I lived through it as a teenager and college student. As I wrote Tippitt Pond, I had such fun recreating this time and recalling my own memories. For a reason I can’t mention without spoiling the story, the Tippitt bedrooms had been left just as they had existed in the early 70s.

Jeff Tippitt was a helicopter pilot in Vietnam. Creating artifacts from that war revealed not only that time but also Jeff Tippitt’s involvement. A photo of him in a flak jacket with other pilots standing in front of a helicopter covered with graffiti and the requisite pin-up girl are on his desk. He was so young. Beside them are his dog tags, a religious medal, and a crinkled-up black and white photo from flight training. Wrinkled Vietnamese money sits on a nearby bookshelf. His infantry hat has a peace symbol and four bullets adorning it. A pile of Life magazines with cover photos from the war sit next to a dog-eared copy of Catch-22. These items document Jeff’s life, but they also remind us of that time.

As I wrote about these items, I remembered a plane flight I took from San Francisco to the Midwest back in the late 1960s, filled with soldiers headed to the East Coast. We were so young, and they talked to me about the DMZ and free fire zones, but they never mentioned the casualties, thousands of them. I thought about those times as I wrote about Jeff Tippitt and his world.

His sister, Melanie, also has artifacts of the 60s and 70s. What decades of excess those were in clothing and jewelry! In Melanie’s closet are vivid colors and polka dots, vintage vests, tie-dyed shirts, a navy CPO jacket, beaded headbands, and miniskirts. Ah yes, the miniskirt. Mary Quant, British designer, created that in 1964 and named it for her favorite car, the Mini. It was, according to her, a perfect act of rebellion to wear one of these. One of Melanie’s favorite miniskirts had yellow daisies adorning it. I still remember those flowers on the clothes and jewelry I wore.

A square dish of jewelry sits on Melanie’s dresser: geometric clusters, chunky bangles, and snaking through them, a few beaded headbands. 45 rpm records are in a drawer of that dresser. “Yesterday” by the Beatles, “Stop! In the Name of Love” by the Supremes, “This is Dedicated to the One I Love” by the Mamas and Papas, and “Bridge Over Troubled Water” by Simon and Garfunkel. One of these songs provides a clue to the mystery of what happened that 1971 day when Melanie Tippitt died at Tippitt Pond. 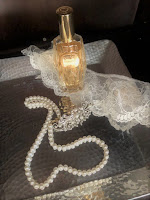 The most memorable item in Melanie’s bedroom is Chantilly, a perfume many of us wore back then. It smells of orange blossoms, lemon, and a hint of vanilla. Made by Houbigant in 1941, it is now owned by New Dana Perfumes, acquired in the Houbigant bankruptcy in the 1990s. In A Death at Tippitt Pond, this perfume plays a mysterious role.

I had quite a time as I created the backdrop for A Death at Tippitt Pond. I’m waiting to hear the audio version to see if it brings those memories back again.

Isn't it fun to hear someone speak the words you only thought in your head. Enjoy the day and I wish for you much success.

Exciting! I wonder what nuances your narrative will reveal?

Fabulous! The spoken word often brings the written word to life in ways that surprise authors and readers. I remember reading Death at Tippitt Pond when it came out. You definitely nailed the era in the book, and now you’ve transported me back to “my” era. Peace, love, rock and roll!

Ah, Kait. A woman from my own time, and vice versa. Thanks, Jim. I can’t wait. And yes, Margaret. We all know how subjective reading is. This should be interesting.

It must be such a great thrill to hear your own novel read aloud! I hope it sells a million copies.

Thank you so much, Kathleen.

This is exciting news, Susan. A whole new audience will fall in love with your book.