At long last, my ‘baby’ is out in the world, making its own way, sort of. I went into this knowing the majority of marketing is the responsibility of the author, and knowing I would stink at it. I’ve never been active on social media. I call it Instachat to annoy my kids, and I’m only slightly more knowledgeable than that. I’m not even active on social…life. My husband and I have a small group of friends, but won’t be found at parties or gatherings of more than a handful of people…the same people, over and over. It works well for us, but maybe not so well for marketing a debut novel.

So…I asked my publisher, Oceanview, for advice and then researched publicists. Money is the limiting factor there, and I can’t imagine I will recoup the funds I spent with sales, but I justified the cost in three ways, (1) we are fortunate enough to afford it without great sacrifice, (2) I’ll only debut once and I wanted to do it right, hopeful that future books might do better if this one does particularly well, and (3) if this one doesn’t do well, I don’t want to wonder if it’s because I failed on my publicity end.

After seeking recommendations and interviewing a few prospective publicists, I went with the one recommended by Lisa Daily at Oceanview, FSB Associates. I considered another group that did radio programs, but since I don’t listen to any sort of program I would be on, it seemed an odd way to find a book to read. I could very well be wrong on that, but I chose to be at least a slightly reasonable steward of our money and stick with one method. 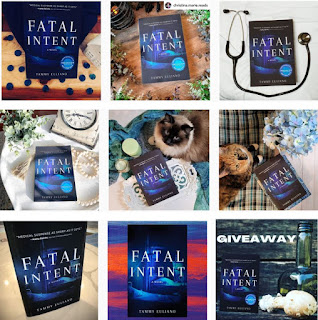 With Anna Sacca’s help at FSB, I learned about Bookstagrammers, and had lots of fun shout-outs from them (they take really cool photos of books). I learned that blog interviews aren’t a verbal exchange, but pre-written questions you answer at your relative leisure. I learned that occasionally people do live interviews, and those are nerve-wracking. I learned some about Zoom backgrounds and lighting and fluctuating helmet-head. Most important, I learned that virtual interviews are best done with the dogs’ squeakie toys out of their reach.

Two weeks in, I’m learning that reading reviews is stressful on so many levels, even the good ones, because they so often give spoilers, get details wrong, and/or apply so much pressure for the sequel that I fear it won’t measure up. Jenny Milchman said I shouldn’t read any, but I’m told that it helps on GoodReads if you comment on the 5-stars. I’ll figure out the sweet spot at some point. It’s still a very steep learning curve, and book two needs tons of attention, and my day job has become more time-consuming as Covid wanes rather than less. The Coronial generation may not be as big as we expected, but it’s keeping our Labor and Delivery Unit quite busy the last month or so. I coined a term for why the bump may be smaller than anticipated…LIBIDON’T – the effect of home-schooling quarantined children on one’s desire to procreate.

I’d love to hear about others’ launch experiences, and recommendations for post-launch publicity.

Congratulations on your first book baby. Enjoy the "fun" of marketing. Best of luck to both of you.

Congratulations on the new release! For my first book, I had a FB launch party that was very successful -for the second, I hired a publicist who was a dream to work with. The launches were great. It was the apres launch continued marketing that was difficult. I've take a few years hiatus to concentrate on learning those ropes and now I'm ready to toss my hat back into the ring!

Congratulations on your first book, Tammy! Marketing is so not fun, but it sounds like the publicist is working out. Cool!

Congratulations, Tammy! And I agree with Jenny. Don't read the reviews. You can have 1,000 5-star reviews but when you stumble across that one 1-star, you'll want to crawl under the covers and cry for a week.

Congrats on the new release! I take the position that I read all reviews...cringe at the bad ones and then decide if they have a good point or are ridiculous. I may get annoyed, but sometimes, they raise something I need to think about. Of course, I read the good reviews to glow, but also to see if there is anything I can glean from them, too.

Congratulations on your book launch. May you have many, many more.

Book promotion is a never-ending learning process and we never feel we're doing enough. Congrats on your book launch and just enjoy the ride!

Being an OR nurse, this one seems right up my alley, can't wait to read it,,,,,,,,,congratulations!!

Congratulations, Tammy, on your book launch. Your hard work has paid off, which is a wonderful feeling. Promoting your books is never easy, but as you go on, you'll find ways to do it that come naturally to you. Good luck.

Tammy, Congratulations on the birth of your first book. Finding what we're comfortable doing re promotion is a trial and error kind of experience we all go through. Then, of course, we often don't know which promotion is helping with sales. To add to this, what worked months ago might no longer be working today. I don't know much about Bookstagrammers. Must look into it.