On the day news broke of Christopher Plummer’s passing, I had been thinking about the authoritarian father figures who had dominated so many novels, films, and series of the past. Perhaps Plummer played one of the most iconic in his role as Captain von Trapp in The Sound of Music. Although it brought him fame, a NBC News account indicated that he considered the character “humorless and one-dimensional,” and quoted him from a 2007 Associated Press story as saying, “We tried so hard to put humor into it. It was almost impossible. It was just agony to try to make that guy not a cardboard figure.”

In today’s world where both spouses and/or parents have joined the work force and contribute to home and child care, the authoritarian father figure is a vanishing breed, despite his long and varied history. Consider Zeus in Greek mythology, Oedipus’ daddy Laius, Montague, Capulet, and King Lear--all of them patriarchs doing what they thought best for their families and causing more difficulty and grief than they might have imagined before making adjustments for their families’ sakes. 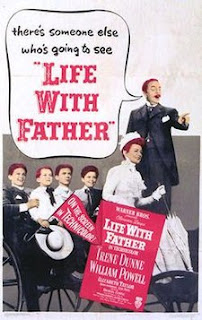 Clarence Day, Jr, an author and cartoonist, wrote a series of books about his own family, God and My Father (1932), Life with Father (1935), and Life with Mother (1937, published posthumously), which Howard Lindsey and Russell Crouse turned into a 1939 stage play that later became a 1947 movie, both called Life with Father. The story was about a 1880s New York City household presided over by stern Clarence Day, Sr., but actually organized by his gentle wife Vinnie, whose greatest concern was that her husband needed to be baptized.

The 1942 novel Meet Me in St. Louis by Sally Benson featured a strong businessman father who, after announcing that he was moving the family to New York to further his career and care for them, had to capitulate to the family’s desire to remain in St. Louis for the World’s Fair and a more congenial life style. It transferred first to film before becoming a Broadway show.

Frank B. Gilbreth, Jr, and his sister Ernestine Gilbreth Carey wrote a similar family saga, Cheaper by the Dozen, about their efficiency expert parents. The father, Frank, Sr., was the strict and methodical, who boasted of only raising twelve children, and the mother, Lillian, was credited as raising twelve only children. Again, the disciplinarian father is mitigated and often overruled by the compassionate mother. The 1950 film was remade in 2003. 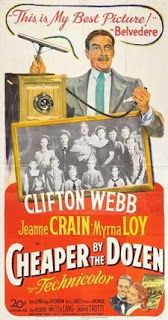 In 1955, Patrick Dennis wrote a novel, Auntie Mame: an Irreverent Escapade. Although Patrick denied a connection, the main character’s viewpoint seemed to mirror that of Patrick’s own eccentric aunt Marion Tanner. Here, the authoritarian father figure was deceased, but Auntie Mame still waged war to keep a young Patrick from following his father’s footsteps too closely. The novel became a Broadway show and film, then transformed into a Broadway musical, also later made into a movie.

Father Knows Best began as a radio show in 1949 and aired as a television series from 1954 to 1960. The Adventures of Ozzie and Harriet was featured on the radio in the 1930s and became a TV situation comedy from 1952 to 1966. Throughout the 1960s and 1970s, programs featured strong contemporary fathers, such as My Three Sons, as well as historical ones, like Bonanza.

Then, in the 1970s, the strong father figures, while still manipulated by their families, became more outspoken and ridiculed on political issues. Archie Bunker in All in the Family and George Jefferson in The Jeffersons freely spoke their minds, but often had to recognize that their opinions no longer fit the cultural landscape. They modified their views, not just to accommodate their family’s wishes, but to conform to social norms.


Some vestiges of these authoritarian father figures can be found in contemporary mystery novels. Sara Paretsky’s V.I. Warshawski has a neighbor with whom she shares dogs, Salvatore Contreras, a WWII veteran of Anzio. Also, V.I.’s mentor Lotty Herschel has a significant other, Max Lowenthal, who could fit into the father figure category. Sue Grafton’s Kinsey Milhone finds fatherly support from her landlord Henry Pitts.

Have you encountered authoritarian father figures in mysteries and other novels? How do you think that character type might change in future stories?

What a thoughtful blog and wonderful walk down memory lane.

I grew up in the authoritarian father era, in real life and in entertainment. I think the character was in flux even in the 1950s and 1960s as the shows generally ended with the father figure chastened and imparting lessons learned to his children.

In the course of our human history, it wasn't all that long ago that all members of a household were subject to the absolute authority of the paternalist male head. That included wife, children, and other members, whether hired, indentured, enslaved or fostered. The only people recognized as significant had to be "male, free, white, and 21." For some purposes, add "and own land."

Everyone else's rights were slow to be recognized.

Of course, there have been other civilizations with other structures, but their impact on the culture we see today was minimal.

I adored Life with Father and Mother as a kid. And Cheaper by the Dozen.

What an interesting topic! All I can think of is the scene in My Big Fat Greek Wedding when mama says the man may be the head of the household, but the woman is the neck that turns the head.

Kait, I agree with you. As time progressed, chastising the father seemed to be the object of those episodes.

Kathleen, the patriarchal structure has affected so many aspects of our culture.

Margaret, I loved the stories, too. Even though the father's pride often took a tumble, his devotion to his family was always clear. Thanks for mentioning Linda Castillo's books. I suppose the recent movie KNIVES OUT also featured a dominant father with Harlan Thrombey, interestingly played by Christopher Plummer!

Shari, what a great quote, that expresses a lot of truth!