An Interview with Author Jackie Layton by E. B. Davis

Does one good turn deserve a murder?

Despite all her good intentions to focus on a healthy lifestyle and leave crime solving to the professionals, Andi Grace Scott has run right smack into another investigation--literally. Who’d have thought caring for stray cats and a healthy morning beach run could lead to murder?

Andi Grace has found another body and a young woman who needs help. Solving this puzzle will come with a cost. This time, catching the killer will require Andi Grace to confront her past relationships and truths about her deceased mother. 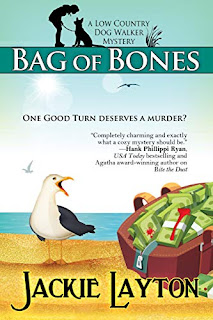 I’d never read this series, so when I picked up Bag of Bones, the third book in the Low Country Dog Walker mystery series, I wished I had read the series from the beginning. The reason? The main characters have a complex and interesting backstory that I wanted to know more about.

Main character Andi Grace was the oldest child and college-bound when her parents were killed. To avoid having her younger brother and sister put in foster care, Andi Grace gave up her education to raise her siblings, keep the family together, and remain in their home. As a main character, Andi Grace is admirable, likable, hard-working, and above all else persistent and on the trail of justice. Due to her dog-walking business, she finds bodies, or rather, her dog and client dogs find bodies. Yes, she does solve mysteries, but her investigations also reveal truths about her family’s past.

Sunny, Andi Grace’s German shepherd, is a twelve-year-old female. Chubb, boyfriend and lawyer Marc Williams’s golden retriever, is not yet one year old. How do the two dogs interact? Did you have a basis for their behavior?

I based their behavior on my oldest son’s dogs. Bill has a fourteen-year-old Westie and a rescue dog. Chewy, the rescue, plays so nicely with Bill’s Westie and my Westie.

Is Heyward Beach a real place? If not, is it modeled on another beach town? Where is it located?

I took the best parts of some of my favorite beaches and created Heyward Beach.

Tabby Malkin, the victim, is a sympathetic character. What happened to her? Why is Kylie Black her caretaker?

Tabby had a fall in the hospital where she worked and suffered head trauma and had seizures. Kylie worked in the hospital and the two became friends. When Tabby realized she wouldn’t be able to return to work, she decided to move to Heyward Beach, a place she’d visited before. Tabby’s daughter wouldn’t agree to help her mother move unless she had a caretaker. Kylie came from an abusive background and didn’t have much money. She jumped at the chance to go to Heyward Beach for a new start on life.

Andi Grace seems to have complex and often fraught relationships with many of Heyward Beach’s residents. Hannah Cummings is a friend, and yet the two women seem totally different. What is the basis of their friendship?

Andi Grace has a caretaker personality, and she enjoys making friends and finding ways to care for them. One of her favorite acts of love is to match people up with dogs.

How and why did Andi Grace inherit a plantation? What is she doing with it? Does it have to make itself pay?

The previous owner of the plantation left it to Andi Grace in his will. She needs it to be profitable, and her best friend is running the place as a bed and breakfast. Andi Grace has converted the big barn into a place to board dogs. 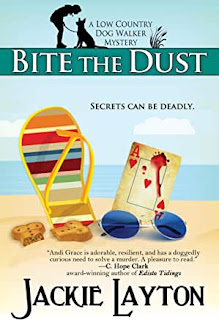 Why does Andi Grace have to deal with two police departments? Which has jurisdiction over the
murder?

Heyward Beach is a small town, and the sheriff’s department works with the police department when solving big crimes.

Best friend Juliet and Andi Grace have a streak of match-making in them. How did Andi Grace meet her boyfriend Marc? Was he a lawyer at the time?

Andi Grace met Marc when she discovered her first dead body in Bite the Dust. Marc had worked for a corporate law firm and got burned out. He bought the property next to the plantation to start a boat building business. It has a dock on the river, and it’s something he enjoys.

Why did Kylie change her name? Why doesn’t she want to go back to Dallas?

Kylie changed her name to prevent her parents from finding her. They were involved with the drug business, and Kylie even had a boyfriend who took advantage of her. She has no interest in ever returning to Texas.

Some of the characters, including Andi Grace, are Christians, who have been tried and tested by life. Are you hesitant to bring out this aspect of their characters? Is Christianity a taboo subject anymore?

They are Christians, but I tried to make this one aspect of Andi Grace’s life. Other authors write about different religions, and I hope Christianity isn’t taboo anymore.

Marc grew up in foster care. Does his experience confirm to Andi Grace that she did the right thing by providing a home to her siblings?

Yes! She sees how much pain Marc experienced in foster care. His background confirms she made the right choice to stay home and raise her siblings instead of going to college.

You are a pharmacist by trade. What is Gabapentin? How is it being abused? What is phenytoin? Topiramate? Are they all regulated?

Gabapentin was first manufactured to control seizures. Once it reached the mass market, doctors noticed patients reported it helped with pain. Technically, a doctor can only prescribe a drug for its approved use by the FDA. It didn’t take long for the word to spread that gabapentin helped relieve pain. Take it with alcohol and you could be free of pain and might have a nice little high. It spiraled out of control, and now many states have made it a controlled substance. It can also be addictive. This is a controversial statement, but I’ve had too many patients tell me about the awful withdrawal they experienced when they tried to quit taking Gabapentin. Phenytoin and Topiramate also treat seizures but they are not abused. (Topiramate can also treat migraines.)

How many years are between Andi Grace and her sister Lacey Jane? Lacey seems so much younger than Andi. Has Andi Grace protected Lacey Jane from some harsh realities, ones that Andi Grace has dealt with alone?

Andi Grace is seven years older than her sister. Her parents were experiencing marital problems when Lacey Jane was born, and Andi Grace looked after her sister more than she should have. 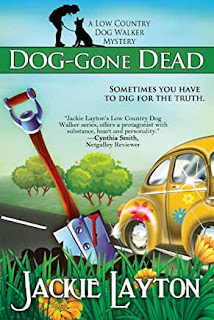 Why does Andi Grace pace herself by counting one to ten in French?

She’s always dreamed of visiting Paris, and when she counts, she thinks of Paris. This action often prevents her from overreacting.

I was amused. Marc is trying to get Andi Grace into health food, and yet both of them love full-sugar Coke and pizza. Are they deluding themselves or just haphazard about applying their intentions?

I think it’s the idea of getting healthy that appeals to them. It’s a struggle for them like it is many of us.

Don’t Marc and Andi Grace ever have a glass of wine? Alcoholism runs in my family, so I grew up in a home where we never drank wine or anything. My mother taught me that if I never drank, I’d never have to deal with the ‘potential’ battle of becoming an alcoholic. (We can trace it back in our family tree, and I have other relatives fighting this today.) Right or wrong, I honored my mother and have never started drinking. I don’t mind being with people who drink wine, but I don’t know enough to include it in a book.

Visiting Hatteras is on my wish list. We had hoped to visit in 2020, but maybe 2021 will be the year. I wonder if people call animal control to catch dogs. We also have a few wild foxes around Pawleys Island. While answering your questions, I saw a yellow tabby cat run down the street, jumped up on a fence, and leaped into the neighbor’s yard. Maybe we just can’t catch the cats. Maybe that’s why there are cat burglars and not dog burglars.

What’s next for Andi Grace and Sunny?

Andi Grace will solve another murder in the fourth book. She’s also in for another family surprise, but I don’t want to give away too much.

Lincoln Zane is a country music star mentioned earlier in A Low Country Dog Walker Mystery series, and he comes to life in Bark and Seek. A podcaster is murdered and Andi Grace struggles to find a motive because so many people would like to see him disappear, including Lincoln Zane.

Elaine, thank you so much for hosting me today. It’s been a pleasure to visit with you.

Congratulations on your new release. This is a new-to-me series, but I plan on becoming acquainted with Andi and Marc in a hurry.

Congratulations on the new book. I love the premise of the series and the way your characters are developing. They sound like people I'd gladly spend time with.

Congrats on your latest! I'm sitting in a snow bank dreaming of a warm beach. Your books will be a great substitute.

Congratulations, Jackie, on all your publications. The series sounds intriguing. I love the covers.

Sounds like a great series. Thank you for introducing it to us.

Congratulations, Jackie. It sounds like your series is moving forward and people are enjoying these characters. Hope to see more of you on our blog!

You all are so kind. Thanks for taking time to visit with me and commenting. I hope you enjoy getting to know Andi Grace and the people of Heyward Beach.

E.B., thanks so much for hosting me. It's been a lot of fun!

Congrats on your newest book, Jackie! I think it's so interesting that you weave in the current mystery with the unveiling of your character's past.

Thanks, Jennifer! As I write the fourth book in the series, it has become a bigger challenge.