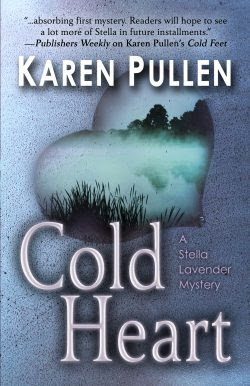 I had the pleasure of meeting Karen Pullen at the Malice Domestic Conference when we promoted Carolina Crimes: 19 Tales Of Lust, Love, and Longing, in which I had a short story published. Although I’m a member of North Carolina’s Triangle Chapter of SinC, it would take me over four hours travel time to get to the meetings, which I never attend and for which I apologize.

I also had interviewed Karen about the first Stella Lavender series book, Cold Feet. When the second book in the series wasn’t forthcoming, I wondered if Karen was trying to find a new publisher because I’d heard Five Star Cengage was pulling out of the mystery market. But they released her second book Cold Heart (finally) in January.

The series is traditional. There are police-procedural, romantic, and cozy elements, but there is also action-adventure with touches of violence. Poor Stella keeps getting in the line of fire. Karen portrays strong women leading their lives with courage. And her characters’ pets have the best names!

I liked Cold Feet, but I loved Cold Heart. Karen seems to be hitting her stride with this book. Her metaphors are wonderful, for example: “Never far from my mind was the sensation a bullet causes as it flies by, that firm push of air, as fresh a memory as the taste of strawberries.” (Loc. 1992) As I get to know Stella Lavender more, I realize Karen has barely touched on her backstory, compelling me to prompt Karen to write faster. Her books are the type I enjoy reading.

Cold Heart, a traditional mystery.  Motivated by her mother’s long-ago
unsolved abduction, Stella Lavender has joined the North Carolina State
Bureau of Investigation only to be severely challenged by her first assignment:
undercover drug agent. Stella works nights, buying drugs from paranoid drug
dealers, gathering evidence to send them to prison or turn them into informants.
She’s great at the job because, as her boss says, “you don’t look like a cop.”
But the physical danger and the necessary betrayals are getting to her.
When she sees a chance to work homicide, she’ll always take it.

One afternoon Stella gives a hitchhiking teenager a ride to her babysitting
job in a wealthy neighborhood. Horror awaits them—the father lies dead in a
pool of blood, and his toddler is missing. Stella joins the murder investigation
as the puzzle quickly grows. Most importantly, where is the toddler? A dizzying
array of plausible suspects provides more questions than answers.

At the same time, Stella’s personal life offers plenty of distractions.
Her grandmother Fern, a free-spirited artist with male admirers wrapped
around every one of her paint-stained fingers, needs Stella’s help with
expensive house repairs. And Stella’s attraction to three very different men
means her romantic life is, well, complicated.

Cold Heart draws the reader into a darkly
delightful page-turner as Stella rummages  through every strata of
society in her relentless and sometimes unconventional pursuit of a
cold-hearted murderer who won’t stop at just one victim.
http://www.karenpullen.com/

Small town in a rural county, near Chapel Hill and Raleigh. Wait… that describes Pittsboro, my hometown! In these books, the town is called Verwood, in Essex County. Law enforcement departments are small and will call on the SBI to assist with murder cases. 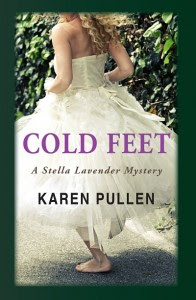 As a State Bureau of Investigation Special Agent, Stella doesn’t have room in her life for babies, but you revealed her maternal instinct in this book. Why do the Lavender ladies favor babies over husbands?

Fern has always proselytized against marriage, feeling it’s a bad deal for women. She arrived at this belief watching her mother nurse an ill husband for many years. Grace, Fern’s daughter, disappeared when she was 25, so who knows, she might have married eventually!

Stella cons the victim’s stepbrother, Bryce, without misgivings. Why does she feel that doing undercover drug buys is betrayal? In both circumstances she does good.

Stella’s undercover work is by definition deceptive. It requires lying about her identity, her history, her involvement with the police. Stella is a moral person. Sometimes it’s difficult to reconcile the deception with the fact that’s it’s difficult to catch narcotics dealers any other way.

There are a lot of guns and rifles in Cold Heart. As an author, what determines your choice of weapons—popularity, function? Do you get advice?

Google is my friend. And gun-owner blogs. I run my choices past a real friend who knows a lot about guns.

Young adults, Bryce and Nikki, have much in common and show a lot of resentment. Are they acting out? In one instance, the reason isn’t teenage angst but real. In the other, you’ve left the reader wondering. Is that an intentional loose end or does Stella look the other way?

Stella gives them a break, I think, because they are young. Bryce’s mother spoiled him; she died, leaving him adrift and unloved. Nikki’s had a hard time; her parents divorced and her mother’s second husband was emotionally cruel to the child.

Richard, Stella’s boss, irks me. She’s more sympathetic to him than I would be, even after constantly reminding her about her ex, Hogan. Why?

Haha! Richard is modeled on a boss I had once, insensitive and clueless, who tried to connect on a personal level but always missed the mark. I felt sorry for him. Very well-dressed, though.

One of your characters is the town’s beloved and retired Pro football star, Lincoln Teller. He’s a decent man, but lousy at business. Is he also lousy at picking employees? Does he think his success on the field will enable him to be successful in any field? Is he loyal to a fault?

You’re right! Lincoln’s manager is ripping him off. Lincoln is too trusting, I think. Let’s hope he uses a recruiter to find his next manager, who will be ethical.

Temple, the victim’s wife, has more pluck than I gave her credit for. But then, you weren’t very nice to her. She suffers the loss of her husband, her first child is kidnapped, and shortly after her husband’s murder—births her second child. Is she normal, or does she have post-partum depression or PTSD? Has she just had enough or is her upbringing by her father, an ex military man, Wesley, the source of her strength?

As you say, poor Temple is put through an emotional wringer until she collapses with post-partum depression. I always saw her as a tough mama, though, capable of acting decisively and bravely. And she does.

I wanted to slap June Devon. Is she passive-aggressive or what?

She is bitter at her lot of life, and not particularly interested in helping the police, especially since she’s far from innocent.

What’s going on with mysteries and Five Star Cengage?

Five Star will not publish any more mysteries. Instead, they’ll focus on westerns. Maybe Stella should meet a cowboy and move to Montana?

Why so long between books? Chapter anthologies? Business?

A busy life:  my B&B and family responsibilities. I edited a Sisters in Crime chapter anthology in 2014, Carolina Crimes: 19 Tales of Lust, Love and Longing, which was nominated for an Anthony award in 2015. There’s great stories in there, right, Elaine?

What’s next for Stella Lavender?

I’m working on Cold Fury, in which Stella investigates murders that happened at three different points in time.

At the end of the book, the following exchange takes place between Stella and Fern, Stella’s grandmother (Loc. 3919):

“You can think ‘what if’ all you want. Things happen for a reason.” [Fern says]
“What’s the reason for murder?”
Over her coffee cup, she blinked at me with true-blue eyes. “To teach us a lesson.”
“And…the lesson is?”
“You have to figure it out. That’s your purpose in life, to learn your lessons.”

Do you agree with Fern?

Fern says the reason for murder is to “teach us a lesson” but she leaves it up to Stella to figure out what that lesson is. I think Fern is saying, cryptically, that we each walk our own path. Some paths are smooth; others have ruts and snakes; a few, sinkholes and quicksand. She and Stella have had to walk strong. 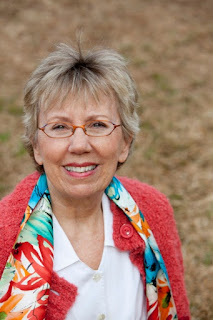 I used to live in that part of the country. Your book should make interesting reading.

Thank you, Karen, for joining us at Writers Who Kill. Your books sound like you can really sink your teeth into them. Just the thought of reading about your character going under cover makes me shiver. Love the titles. Definitely on my TBR list.

Looking forward to reading your books.

I really enjoy reading Karen's books. The Lavender women are good with children but not so big on marriage. Thanks for the interview, Karen. I'm hoping you get more writing time in the future.

You've created a special place for readers and authors. I appreciate the opportunity to tell the WWK community about Cold Heart and Stella. Thanks very much!

What an exciting series, Karen! I'm looking forward to reading about Stella and checking out that anthology.

Karen, two books I'm putting on my list of books to order.