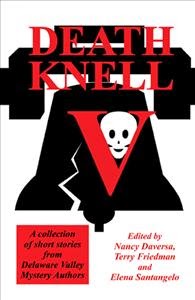 Most of the authors at Writers Who Kill write short stories as well as novels. Last summer, WWK blogger Paula Benson interviewed short stories writers. This summer, we want to canvas editors and publishers of anthologies to promote short stories and to point our readers in the direction of some great reads. Summer is the perfect time to read short stories while hopping in and out of the pool, sitting on the beach, or to read round the campfire after hiking all day. This week we’re focusing on the Delaware Valley Chapter’s anthology, Death Knell V. Please welcome KB Inglee, who worked on the chapter’s anthology.                       E. B. Davis
KB Inglee: This is the second Death Knell I have worked on. DK IV was my first publication but beyond that I worked with the publisher, compiled the edited stories, formatted them for the publisher, and arranged for the cover. I was less involved in DK V, but I compiled the stories and formatted the manuscript.

What prompted your chapter to create an anthology?
As you can see, this is our fifth volume. Only chapter members can submit stories. The mission for the Death Knells is dual: it is a safe learning experience for writers who have not published, and a pretty secure chance at first publication. Enough well published writers submit to have prominent names and well written stories.  The editors do a great job of whipping the stories into shape for publications. That said, Death Knell V has high quality writing and can stand up beside any Sisters in Crime anthologies.

How did you develop a theme for your anthology?
There was no particular theme for DK IV or DK V. DK III stories had to be set in the Delaware Valley.

Do you develop a “local” theme to entice readers in your area?
Some of the authors chose a local setting, thought they were not required to do so.

How long did you give your writers to submit stories?
Most of the writers don't have a story in mind when we put out the call. They have to think it all up and write it. The call went out in the spring, and the stories were due the next winter. A writer has to be a member when the call goes out. When one of the anthologies was announced there was a sudden rise in membership. Once the book was out the new members vanished.

Did you adhere to the guidelines set up for anthologies by SinC?
Yes, we followed them strictly.

What was the response to your query for stories among your writers?
There are twenty stories in the anthology. I don't actually know how many were submitted. I read some of the stories before they were submitted so I know how hard  some of the writers struggled to make it work.

What were the criteria for selection?
All stories that were submitted were accepted. If they were not published, it is because the author withdrew them during the editing process. I nearly withdrew my DK IV story because I didn't think I was capable of making the change in the ending that the editors expected. The day before the deadline, I woke up in the morning knowing how to fix it.

Was murder a story requirement?
No, only a mystery. I don't know if a murder was required in DK I. The DK V stories do not all revolve around murder. My own story is about armed robbery, but I had one person shot and another killed during the robbery, just 'cause I thought there should be a murder. One story is about a foiled holdup. 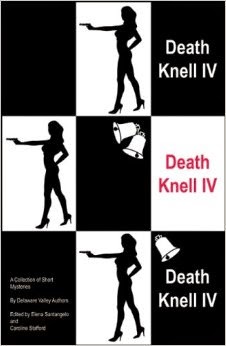 Were the stories judged blind? How did you obtain judges?
All stories submitted were accepted.

Did you hire an editor?
Editing was done by three of the chapter members.

Was any thought given as to the order of the stories in the anthology?
The editors ordered the stories for the most variety. Similar stories were separated.

How did you find a publisher, and who published your anthology?
DK I and II, III were printed by a local book store. It had gone out of business by the time we were ready to do IV. Two of us chose a print on demand press. We looked at lots of POD books and chose five houses that had good products. Of the five we listed the house that was local first and the others in order behind that one. I actually had a book done by the first choice to see how they were to work with. DK IV and V were done by Infinity Publishing.

Were you given a choice of covers?
We designed our own cover for DK III, IV, and V. They were done by family members of chapter members.

How are you promoting your anthology and do you have a budget to do so?
There is no budget for promotion. Each member is pushing it in whatever way they can. The chapter arranges for signings.

Do you think that there is a resurgence of interest in short stories?
Personally, I believe there is. Online publishing has opened up a whole world looking for short stories. I don't expect to support myself by writing short stories.

Have any of your anthology’s stories been nominated for awards?
None. But we can hope. Three of the people involved with Death Knells have received Agathas: Robin Hathaway for Best First, Caroline Todd for Best Historical Novel, and Elena Santangelo for Best Non-fiction.

Are you planning other anthologies?
There will be a Death Knell VI but it is not being planned yet.
Posted by E. B. Davis at 12:00 AM

What a wonderful opportunity for your members! Especially for those who had not yet published a work. I love short stories, and I'm very pleased to see an increasing interest in them.

Thanks for the interview, KB. I've enjoyed hearing from the Chapters about their anthologies. Your chapter seems to have an abundance of writers and artists among its members who pitch in, although I know your time has been spent pulling them together. Hope it sells well!

Welcome back to WWK, KB, even though it's just a brief visit. Our chapter - Northeast Ohio Sisters in Crime is rather new, but I've mentioned putting out an anthology at one of our meetings. And as our membership grows, I'm going to push for it even more.

It's very interesting to see how different anthologies are handled. My writing group from Austin (they graciously included me) is querying an anthology at this very moment. If it comes about--no, WHEN it's published, you'll hear us screaming about it.

Thanks for asking me.
Delaware Valley has a slightly different take on the purpose of an anthology. Ours is largely a teaching tool for both editors and writers. But it's still a wonderful book.