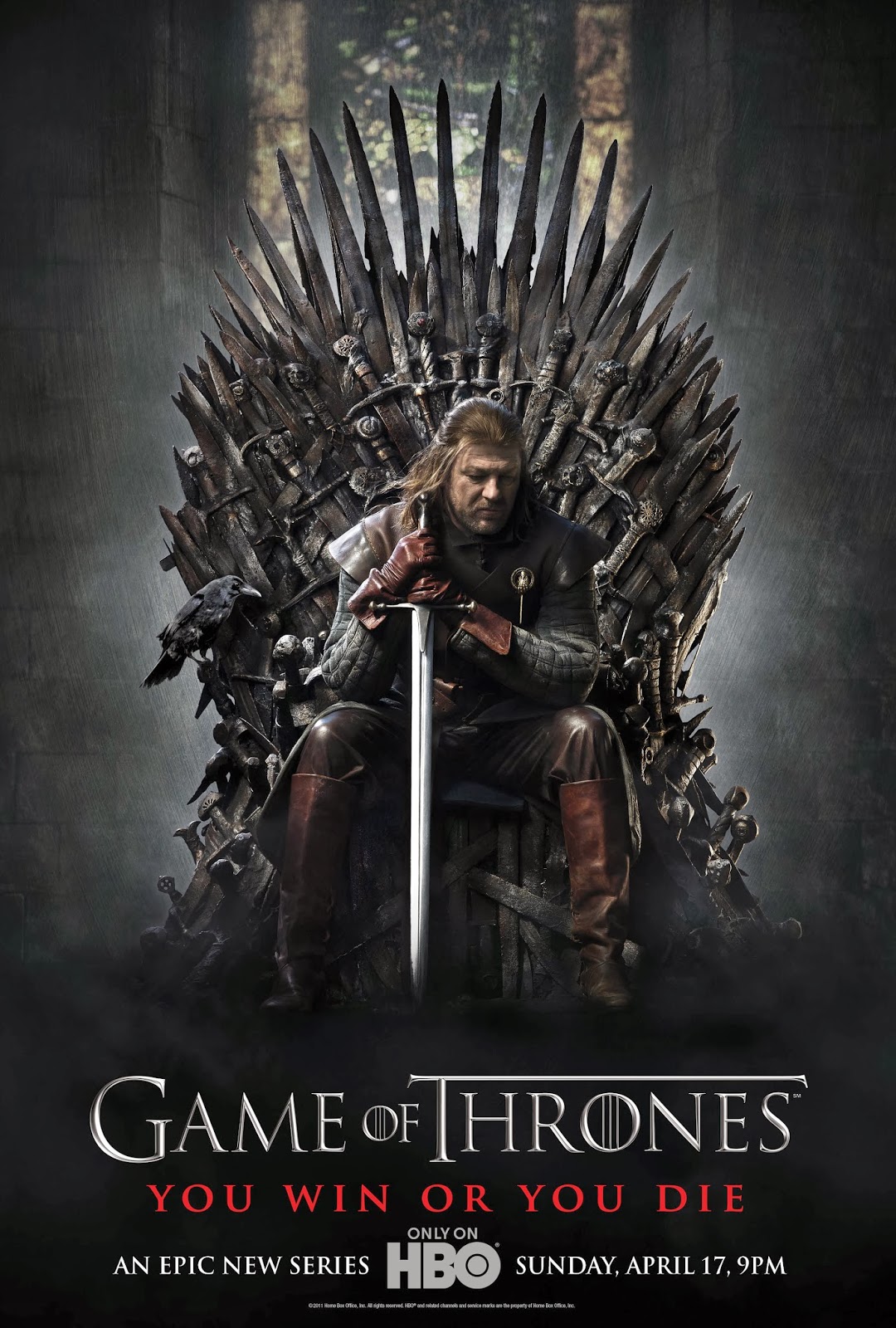 My son found the third season of the HBO series, Game of Thrones, on a spectacular deal at a local big box store and bought it. I’ve long been a science fiction and fantasy reader, and he joined me as soon as he could read. We’re both fans of George R. R. Martin’s series of books from which the TV show is made, and we have watched the first two seasons (on DVD). Heck, even my husband is hooked on Game of Thrones—he who hates fantasy of any kind. The books have been very successful, and the TV series is a spectacular hit. Ben, my husband, is not the only one who scoffs at books with dragons and magic who’s caught up in this particular story. So I thought I’d pick up some tips on storytelling from someone who’s been so successful.

The first lesson is—and this is no spoiler because complaints about it are all over Facebook, Twitter, and various blogs online—every character you come to care about dies. Well, not every single one. At least, not yet. But Martin lets the reader know he’s playing for keeps and that no character, however good, however noble, however much he may seem to be a protagonist, is safe. Ed McBain did this back in the 1960s when he killed off one of his beloved major characters in his popular 87th Precinct police procedural series. He did it as a signal that the usual rules of genre fiction were not applying, and anyone in his books was vulnerable. It shook up his readers, caused a storm of controversy, and enlivened a long-running series.

Other crime fiction writers do this on occasion today. One major writer killed off a pregnant character who’d been a major fixture in her series since the beginning and touched off rage in a number of her readers who swore never to read another of her books. (Her several books since then have been even bigger bestsellers than ever.) Fans of the Game of Thrones TV series have cursed and screamed imprecations all over the internet and sworn to stop watching, but Game of Thrones is a bigger hit than ever. So, lesson one has to do with suspense—if everyone is vulnerable, the reader truly cares and worries about whether those characters she’s come to love will survive.

The next lesson has to do with character. The characters Martin makes us care about most are characters with flaws and weaknesses.

Arya Stark, the tomboy, unladylike, wild, and reckless, whose own family doesn’t seem to value her as much as her perfect, beautiful sister.

Jon Snow, Arya’s bastard older brother (the only one who really seems to see her true worth) who’s exiled to the Night’s Watch, a band of outcasts who live in the wilds and guard the fragile borders of the civilized kingdoms.

Danaerys Stormborn Targaryen, last of her royal line, only survivor of the massacre of her family when she was a babe (except her tyrannical older brother who terrorized her before his own death), penniless, with the powerful usurper of her family’s throne sending assassins to kill her, her husband and child killed by black magic.

Samwell Tarly, loyal, self-deprecating, and overweight, scholarly heir to a lord who gave him the choice of giving up his inheritance and joining the Night’s Watch or a grisly death.

We watch these people make their mistakes while trying to do the right thing and fight against overwhelming odds in whatever ways they can. And we root wildly for them and fear for them because (see lesson one) we know any of them could die tomorrow.

The antagonists of Game of Thrones are also more fully limned than usual villains. Some that people love to hate, such as Jaime Lannister and his incestuous sister Cersei, are so fully developed with backgrounds that explain their evil behavior and often leave the reader/viewer almost sympathetic as he comes to understand what drives them. This is a strategy that strengthens a book or film and makes the whole plot more realistic and more suspenseful, as opposed to the two-dimensional melodramatic villains that are often used by writers.

The third lesson is another aspect of suspense--foreshadowing. From the beginning of the books and the series, the ominous repetition of a phrase that is both the motto of a major noble house and a warning embedded in the entire culture—“Winter Is Coming”--in this world where winter may last a decade or longer and bring with it horrible monsters to devastate the world. The reader and viewer know that a larger danger lies over the entire story-world while the violent battles between royal contenders, individual crimes, and intricate conspiracies and betrayals hijack the attention and focus of everyone. The characters are like ants fighting a war while a giant shoe is poised to stamp them out of existence.

Are you a Game of Thrones fan? Do you read or watch in a genre outside of mystery/thriller and do you find lessons in those genres that can be applied in the realm of crime and suspense?

Foreshadowing is a great technique to inject suspense in mystery novels. Suspense is usually characterized by the writer giving knowledge to readers that the MC doesn't know. Readers watch the MC walk into dangerous situations or complications. Readers know it's just a matter of time and clues before the MC figures out what they already know. Using foreshadowing in mystery adds that element of suspense without tipping off the reader to the ultimate solution to the mystery.

Ann Cleeves kills off a character in her Shetland police series. I found it shocking, but I've come to trust Ann so I've kept reading. When piling trouble on your MC, that's probably the most devastating blow an author can give a MC. As a reader, I had to continue to read to find out how the MC deals with the blow.

On one of the email lists, there was a discussion about outlining a series, which I've thought about, but until the first book sells, it's an esoteric exercise. However, I think that planning the character arc for the series is essential and pertinent to this discussion.

My television package of shows does not include this one. It sounds interesting enough that I'm now considering buying the video.

I do hate it when a character I like dies, but if it makes sense in the context of the story, I (as a reader or a fan) can accept it and even marvel at how in control the author is of his/her story. If the death is senseless (a certain gentleman in Downton Abbey) then it just rankles....With GoT, deaths and violence are part of Martin's incredible world building. I can't wait to binge-watch (and binge read) the whole series!

I don't watch a lot of TV, so I have never seen this show. However, I do read outside the mystery genre, and often find techniques and ideas that can be applied to my writing.

Like KM, I don't watch much TV and don't have cable so only watch a few shows on PBS. I was upset about the certain character in Downton Abby, too, however I see why it happened. It added to the plot line so the series could continue.

I mostly read mysteries, but not exclusively. I'm happy that my two book clubs seldom pick mysteries so I'm reading books I might not hear about otherwise. I read the first several Harry Potter books and always planned to finish the series as well as The Hobbit and the first several books in The Lord of the Ring series. Other than that, I don't read or watch fantasies.

EB, you're absolutely right. Foreshadowing is a great technique to heighten suspense--if the writer doesn't beat the reader over the head with it.

Yes, Cleeves killed off an ongoing character, and that shocked readers. It also upped the stakes in her books considerably because readers now know that any character might die under the right circumstances.

One of the difficulties with a series is that you lose suspense with the reader's assumption that your main good characters will survive whatever they encounter. When a writer kills off one of these characters, s/he makes true suspense more possible. But it has to be done right and not just out of the blue to shake things up.

Warren, I'd strongly recommend it. I was leery when HBO first took on the series. We've all see TV and films that ruin favorite books. However, they've done a remarkable job of casting, have a high budget to do quality settings, and have excellent writers, including Martin himself. they've been remarkably faithful to the books, except for making them sexier and bloodier (something you expect from HBO but that GOT hardly needs). After the last episode we watched, Ben said to us, "That's our problem in America today. We've got a bunch of Littlefingers and Cerseis in power."

Martin is a history buff and based the non-magical events of his series on the War of the Roses.

Shari, you will love it.

I agree that the certain gentleman's death on Downton was disappointing, but the actor wanted to leave, and that left the writers in a bind. On GOT, a slightly less important character's actor left, and they just replaced him next season with someone even better. They weren't going to screw the whole thing up because of him.

KM and Gloria, I don't watch TV. Didn't get the box you had to get when it switched over since we watched so little. We watch mostly PBS and BBC shows on DVDs. We knew when they made GOT, however, that we'd have to get those DVDs.

Fantasy is an age-old classical form of literature, and science fiction is the modern form of fantasy. The original forms are fantasy (which most of the great epics are), mystery, romance, history, and poetry. But each of them usually contains elements of the others.

Linda, you pretty much described every single reason I will forever love those books and the show. George R.R. Martin has FABULOUS lessons for writers of every genre on display in those books. Most certainly.

I haven't watched Game of Thrones but I've heard so many good reviews, I should give it a try. The characters sound fascinating.

Yes, Sarah. I think it's one of the problems with the ghettoizing of books by genre in our modern society. There are wonderful writers out there to learn from in so many different genres. I know because I'm what the statisticians call a "promiscuous reader." (Sheesh, stigma much?) That simply means I read in more than just a couple of genres.

A literary novel that every mystery writer could learn from is Linda Hogan's Pulitzer-finalist MEAN SPIRIT, plus T.C. Boyle, Kent Haruf, and Joyce Carol Oates. In science fiction and fantasy, Octavia Butler, C.J. Cherryh, Charles de Lint, Neil Gaiman, Ursula K. LeGuin have wonderful lessons for us. There are romance writers who are incredibly skilled at dialogue and rendering emotion and atmosphere, all things we can use in our writing. (I'm not naming names there because I haven't read any in years, so am out of date since their books go out of print faster than almost anyone's.) And as I frequently write on my blog and elsewhere, many fine mystery authors have a lot to teach writers of these other genres.

Kara, I've barely touched the surface on the characters. Martin excels at developing wonderful characters, among many other things.