“Something Old; Something New;…”

“Something Borrowed; Something Blue” continues one tradition for the bride. Current divorce rates notwithstanding, many brides continue to follow this wives’ tale formula to assure marital bliss. My daughter, Dael, thank my luck stars, is not tradition bound, and I wondered if she was following this old saw.

“Yep,” she said as we waited for the pre-ceremony photo-shoot to begin. “The dress is old, the headband new. My watch has a blue face, and I figured since I was so close, I’d borrow some earrings.” She pulled back her hair to show the small stones. A rather practical approach, I thought, and it got me thinking about how she and Frank merged the old and the new in their wedding celebration.

Since neither of them are church-goers, they held the wedding ceremony at the facility where they had the reception. Given we are talking about Bethlehem, PA in the beginning of February, one less bit of traveling on potentially dangerous roads made a lot of sense. They did choose to have a minister officiate, but they designed the ceremony and vows themselves.

Dael had two attendants. Her bridesmaid was her best friend dating from high school, and (breaking big time with tradition) her second attendant was a male friend dating back to her first job. Frank had two male groomsmen. We followed the tradition of processing and the audience stood as I escorted the bride down the aisle. However, music from the Lord of the Rings movies replaced the traditional “Here Comes the Bride.” Many of Dael’s friends are theater people—we did not do the traditional rehearsal run through. We each got a script and off we went.

My instructions for the day were to show up early for the pre-wedding photo-shoot then escort Dael. Stand on right. Deliver Dael to front; shake hands with Frank (I wished them great fortune); kiss Dael on the left cheek (so photographer could catch it). I broke form (Dael did not get her independent streak from thin air) and whispered my congratulations to her before giving her the kiss. Then I took my place on the front row.

A friend of Dael’s who lives in Nova Scotia couldn’t be there, and my sister Janice was ill and ended up staying home; so my son, Brad, hooked them into the wedding using Google’s free video conferencing services. The video worked well; audio was a bit iffy since it picked up extraneous (to the ceremony) sounds. Welcome to 21st century technology at work.

The kids and many of their friends are gamers, and the program Dael and Frank developed for the day was structured as a quest with five levels (Ceremony, Hors d’oeuvres, Dinner, Games/Dancing, Ending). Each level had suggested degrees of difficulty. (Ceremony, for example, was labeled Easy: find a chair—only a few in the front are reserved for family.)

While the wedding party and family were involved in the post-ceremony photographs, everyone else could get beer or wine and munch on tasty hors d’oeuvres. (Hard liquor required “additional credits” in keeping with the game theme.) Table assignments cards had the person’s name on one side and a playing card showing the table number on the other. At each table were scrambled pieces of a jigsaw puzzle of the wedding invitation picture—with a twist. Each puzzle had one or two duplicate pieces and was missing an equivalent number, which encouraged interactions between tables. Pretty smart.

The kids announced at the beginning of the reception that they would not respond to the traditional clinking of glasses to kiss. Instead they kept an icosahedron (20-sided) die at their table. If someone rolled 11-20, the bridal couple would kiss. If the reveler rolled 1-8, they had to kiss someone they did not come to the wedding with. If the person rolled a 9 or 10, they had to sing “Happy Birthday” to my mother, who had turned 90 two days before.

Two folks had to sing Happy Birthday to Mom. For the first, our table joined in. The second victim gathered everyone to where Mom was sitting and the entire party sang to her including bride and groom.

The DJ unfortunately followed tradition and played the music so loud that conversation was difficult. Brad measured the sound at 87 decibels. (There’s an App for that.) I suppose old folks like me have been complaining about young people’s noise since the first kids rapped two rocks together during the early cave days. 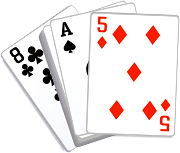 Keeping with the games theme, Frank and Dael provided a variety of games and three large round tables in the back for gamesters. Immediately after dessert, one of the tables filled with kids (note anyone a generation younger than me are by definition kids, regardless of actual age) playing some game that involved lots of hilarity—making me wish I had joined them. Later, a version of scrabble broke out at a second table.

After watching and participating in the dancing, I invited those at the “Jackson” table to play a game of hearts. My mother agreed immediately as did my son Brad. Jan and my sister Judy begged off, but my sister’s partner Carl Dickson was anxious to participate. The four of us repaired to one of the games tables. (Judy came to watch as did Dael’s bridesmaid; Jan went to find out how the Super Bowl was progressing.) We played two games of four hands each. (For those who play hearts, we did not use the Jack of Diamonds rule and we did require whoever had the deuce of clubs had to lead the first trick; in order, we passed left, passed right, passed across and held ‘em.) Mom won the first game hands down, ending up with 28 points—26 of which occurred when I shot the moon—meaning she only got stuck with 2 points on the other three hands. I’m not sure whether Carl or I won the second game, but at least it wasn’t Mom! (Oh, we’re not competitive, are we?)

I have been to some weddings where the only difference between that ceremony and some other was who the couple was and the date it occurred. I’m of the opinion that a couple’s wedding day celebration should uniquely reflect them. Dael and Frank pulled this off. The ceremony was their design and reflected their beliefs and love for each other. All the flowers, including Dael’s bouquet, my boutonniere and the table decorations, were made from folded paper—all decorated with text from the first play Dael and Frank worked on together (Shakespeare’s Much Ado About Nothing). Dessert consisted of cupcakes from a local bakery rather than a multilayered cake. They replaced the throwing of the garter and bouquet with throwing Iron Pigs (a local AAA Baseball team) dolls. And of course, they wrapped the whole day with the gamer quest concept.

I suppose a father is always supposed to be proud of his children, so you may have to forgive me when I say that I was particularly impressed by the fine job Dael and Frank did at making their day a special one.

Congratulations! It sounds like a great time and best wishes to the couple.

Congratulations, Jim! What a great wedding that must have been - except for the music, of course. The last wedding I went to had that horribly loud music, too. All conversation had to cease and many of us left early because of it - at least the older ones. :-)

I loved the idea of tables set up for games. Hearts used to be one of my favorite card games, but my family prefers another card game now and the majority rules.

I can see a long happy future for your daughter and her husband.

Congratulations to you and your family, Jim! I loved the photos. What a wonderful and fun wedding that must have been.

Congratulations! Best of everything to the bride and groom and all their family and friends.

And WHAT a spectacular wedding!! Thank you for sharing!

The wedding cake was a rock formation. The little bride at the top of the cake looked down upon the groom at the bottom, who was climbing up the cake via a rope strung between them.

I hope her humor serves her well during the course of her (hopefully) long marriage to my son. First, they have to get through his four-year doctorate.

Your daughter and son-in-law seem to have much in common. I hope their wedding was their first of many happy memories as a couple.

My own was a Chicago city hall, "I now pronounce you man and wife. That will be twenty five dollars, please. Next." But it's still working all these years later. One of my daughters, who is an archeaologist, had small piece of mastadon bone tucked in her dress for the "old."

Congratulations! Sounds like so much fun. It is nice to see a couple plan a wedding that reflects their personalities and where they really thought about the guests.

Thank you for sharing, Jim! The photos are beautiful. All best wishes to the happy couple!

Hi all. Thanks for your comments.

Sorry to be late in responding. I spent the day at Murder on the Menu in Wetumpka, AL. A great event and authors and readers had a great time.

EB -- I love the rock-climbing cake!

KM - in the end it's all about the relationship, isn't it. Congrats on your continued marital success.

What fun! I always say that the things that go wrong are what make your wedding your own. This one sound like it went without a hitch and still is their own.

What fun! I always say that the things that go wrong are what make your wedding your own. This one sound like it went without a hitch and still is their own.