Pitch Wars: Behind the Scenes of a Huge Writing Contest 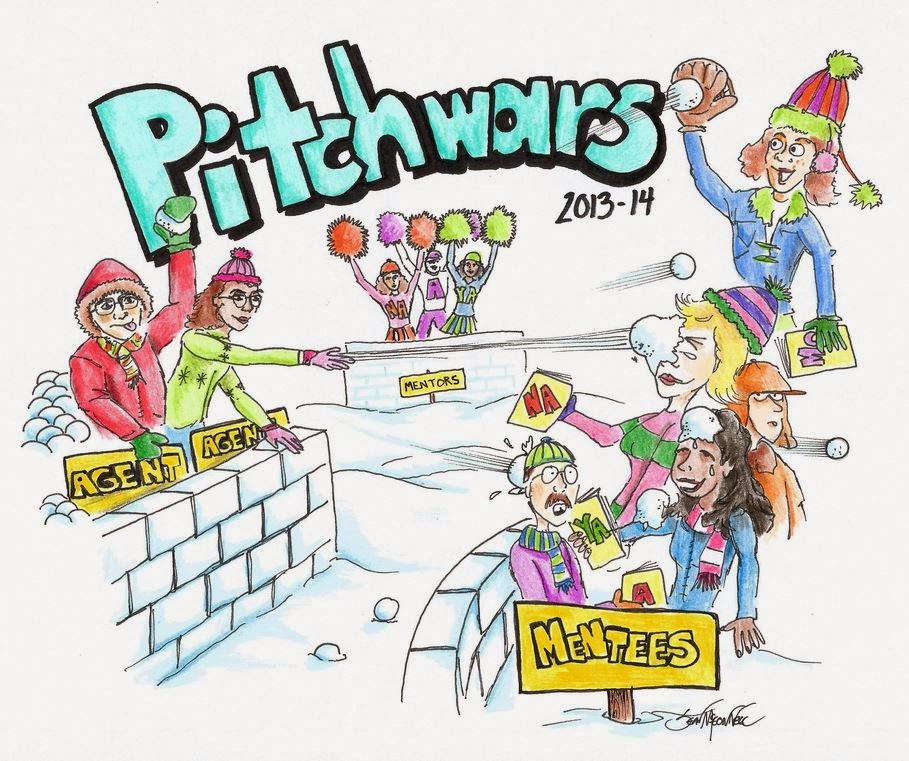 I’ve mentioned before on this blog that I found my agent through an online pitch contest called Pitch Wars. Last Feb. 1, I signed with her, in fact. And made my announcement on Feb. 4.

I really wanted to give back to the contest, so when Brenda Drake, who bravely organizes the craziness, asked me to mentor, I basically stage-shouted across the Internet, “YESSSSSS!”

A single day in December, each entrant was able to submit to up to four “mentors” for the chance of being a mentee. Now, I don’t know if it was because I was one of the success stories from last year or because I was one of the only adult-minded mentors who was taking mystery and fantasy, but I received the most submissions of any of the adult Pitch Wars mentors and the third-most overall.

Ninety-one, out of which I was supposed to pick three people to mentor.

But, because there’s always a catch, I also had the option of taking on someone who didn’t sub to me. Which meant, I had the opportunity of looking at waaaaay more words than just ended up in my inbox.

To say this was overwhelming would be a complete understatement.

Even worse: Everything was sooooo amazingly good.

Voice, concept, strong writing: I’d say at least 95 percent of what was in my inbox had at least one of these three things DOWN SOLID.

But I had to make a decision somehow. And I’m going to share how I made my decisions not because I think it’s incredibly smart or anything, but because if you submit to agents and/or editors and want an idea of what they do when given a huge volume of work, my method might offer a slight hint of insight. Mostly, because it’s very difficult to pare down so many submissions without a method.

I started thinking in specific criteria because I knew if I didn’t, the whittling just wasn’t going to happen, and my picks would end up being chosen by my five-year-old and a highlighter. Yes, I’m serious. He totally could’ve picked three submissions with a swoosh of a purple BIC, and they would’ve been totally workable.

First specific I looked at: Voice. Voice is my number one go-to for reading material. And it also happens to be very important in this particular contest. The way Pitch Wars is set up, the writer only gets to share about 250 words of writing. That’s it. Nothing more. If you don’t have a participating agent’s interest in those 250, you’re done. No request for you.

Second specific I looked at: Concept. If your writing is beautiful but your idea seems like it’s been written a hundred times, that can be a problem. Sure, sometimes strong writing can save a stale idea. Or even a bad idea. But in a contest like this? The idea had to be just as solid as the writing. Or we were done.

Third specific I looked at: Strong Writing. Honestly, usually voice takes care of this for me, but sometimes it doesn’t. Sometimes, the voice is strong but the writing isn’t. And by strong I mean “Does it stand out?” There has to be an X factor that shows your reader that you not only know how to string a sentence together, but that you can do it in a way that adds to the structure, momentum, plot, character development, etc. Pretty words are pretty, but it’s sure helpful if they mean something.

And so, I pared down my ninety-one submissions, looking for writers who met all three specific criteria. I asked for extra pages from about twenty people. And as I started reading the samples, everything just fell away until I had a top five—all of which had Voice, Concept and Strong Writing in spades.

And I fell in love with my top three. They are fantastic reads. And you’ll be hearing a lot about these writers in the coming years. I’m sure about that.

And here’s where I brag on them.

Dan Malossi: My mentee pick, English teacher and former Warped Tour band member (Yes, it’s true). His words are as beautiful as they are heartbreaking. His characters are damaged and interesting, like the spidery pattern left in a windshield after a gunshot, the glass pebbling out in a icy mosaic, yet somehow still managing to stay together. Watch out, folks, because THE FISHERMAN is a MEMENTO-style journey of epic emotional proportions.

Wendy Nikel: My first-alternate and amazing spinner of tales. Her fantasy, PIANO FIRE, is a compendium of things designed to make a reader smile: a plucky heroine, an island paradise, a dashing rescuer, and a really messed up collection of trinkets and secrets dating back hundreds of years. If you know the tale of Bluebeard, you get an extra bonus because he factors heavily into this magical, time-bending story of ownership, love and betrayal.

Jeremy Hepler: My second-alternate and fantastic sport. His mystery, THE GARDENS OF SUNRAY, is suspense in cozy mystery clothes. Somehow, he manages to roll small-town secrets, family bombshells, racism, parent-coddled burnouts, closeted sexuality and the supernatural into the same manuscript and it tastes like a delicious casserole instead of a smorgasboard. Yes, you want GARDENS for dinner.

So, those are my picks (and the links are to their entries). And they are awesome. Totally awesome. And one of them is entertaining an offer right now (I can’t say who…) and I’m sure the other two will have them in time.
Posted by Sarah Henning at 12:00 AM

An interesting process you went through to select your three. Congratulations to all three for capturing your attention and to you for offering to be a mentor.

I've never been to that sort of contest. It sounds interesting. Thanks for letting us know about it.

Thanks for sharing your success with us, and I'm especially glad ot hear that you are playing it forward by helping guide other people.

Thank you for the peek behind the curtain of a writing contest. It will be fun to see the journey you and your mentees take together.

I've never heard of a contest like this before. How nice that you took on the judging which would be a very time-consuming and difficult job. I remember judging the light-verse category of a poetry contest and even with only a little less than 100 entries, it was very difficult job.

All your selections have such interesting projects. Thanks for sharing the process. Best wishes to you, your mentee, and your alternates. I hope the year will bring much success all around.

I think your criteria were spot on, Sarah. Doing pitches verbally makes my blood turn cold and bones feel hollow. If I were verbally good on my feet, I'd have been an actress. Helping in this competition, keeps you active and your skills sharp. Good going for taking the time to be involved when you're already stretched thin. Lot the art work.