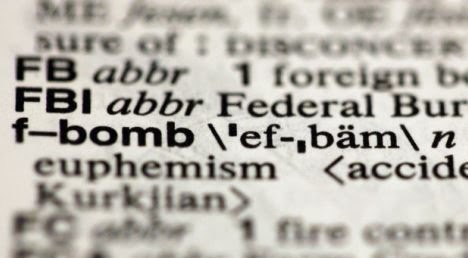 Hi, my name is Sarah, and if you ever read one of my mysteries, chances are you’ll see an F-bomb by page five.

This is not for shock value, or to give me street cred, or to make you think cutesy blonde me is trying way too hard at being taken seriously.

No, I’m not trying to be vulgar when I write a four-letter word in my manuscripts.

I’m trying to be real.

Mystery writers strive to make sure our murders, motives and investigations are accurate and logical—and I don’t think the language we use should be any different. If you’re going to have a character absorbing and investigating a murder, there’s most definitely an appropriate time for profanity.

Up until recently, every main character I’ve written has been either a cop or a journalist. And if there were two dignified professions going head-to-head in a national bowl of “how to curse on the job,” it would be those two.

An example: I once had an executive editor so enamored with the F-word that he used it as often as normal people would say “and” or “the” or “I.”

And though my life experience doesn’t exactly parallel my fictional reality, I honestly think it’s ridiculous to pretend that in the heat of an investigation—either of the journalistic or criminalistic variety—words you wouldn’t say in front of Grandma wouldn’t slip out. Or be thought. Or be uttered by at least a side character.

That’s not to say I believe in throwing those words around willy-nilly. Profanity is like salt: use too much and it loses its impact. It blends in with the ether, and the meaning and spark behind it are gone.

But I do think that, as necessary, a curse word is a good thing because it brings a dose of reality to your fictional universe in the same way real places or items or events do.

That said, I’ve been thinking a lot about curse words lately. And how the use of them—or the lack thereof—is important in the creation of character’s particular voice.

Right now, I’ve got two projects going at the same time involving three first-person narrators. This makes me sound like a sadist, but I’m not, I promise. I just like a good challenge. And, boy, have I given myself one.

One of the projects has alternating first-person, past-tense narrators: an FBI agent from Boston and an agent with Wyoming’s DCI. Here, not only do we have two investigators, but we have a man and a woman, both from different areas of the country, and both needing to have distinct voices.

When drawing up how they should “sound,” I decided that the slightly jaded male FBI agent would cuss more often than the female agent. I’m not saying she won’t curse at all—because, again, I don’t think that’s true-to-life—but in my mind, he’s got much more of a potty mouth than her, and is much more in line with the other characters I’ve written. (Note: I don’t think women cuss any less than men.)

The other project is a first-person, present-tense, young adult mystery I’m co-authoring. It’s my first foray into YA, and, though teenagers curse in real life, the worst of that language is most often kept to a minimum in print. If you drop the F-bomb, there better be a darn good reason.

Writing all these characters at once has made me really consider when and how and why to use profanity and different ways to do it and still stay true to the character, story and what I’m trying to accomplish with voice and structure and tone.

Do you allow your characters to curse? Why or why not?
Posted by Sarah Henning at 12:00 AM

When I first started writing, I used a lot of cursing – for the same reason you stated – the characters would. But sometime in the midst of writing what became my first published novel, I realized that I did not have a need for more than an occasional curse, unless potty mouth was a necessary characteristic of some individual. If everyone was swearing, it was like no one was swearing—except I risked offending some people for no reason.

So now, my characters do still utter oaths, sometimes under their breath and at other times yelling for all to hear, but most of the characters are more circumspect than in my earlier writing.

I only include an expletive to escape my character's lips when it seems natural, something most people would utter given the situation. Usually, I don't use the "F" word since it is probably the most offensive to readers.

Other than those situations, I feel that they are words you could highlight and delete without changing the scene. They are like extraneous words that don't add to the scene and may detract from it. I'd rather use body language, internal dialogue, or some other technique to show the ire of my characters reactions.

Personally, I'm not offended by them. If someone needs to get rid of rage, pent up frustration or injustice, I can understand that cursing a blue streak is better than picking up a baseball bat and hitting. But if someone gets stuck on a curse word, without an emotional trigger, I find it annoying.

I use cuss words when the character and the situation call for it. It is easy to over-use profanity. I want the reader to be drawn into the story so much that the narrator is forgotten.

Sarah, I like what you,say about using expletives like seasoning with salt. As Jim, E.B., and Warren say, the best used expletives are those that seem so natural in use that the don't stand out or call attention to themselves. Most of my writing does not include expletives, but I once wrote a character who was very potty mouthed. I have to admit, it was fun!

Interesting commentary. I don't use profanity much, nor do my characters. I have worked places where you'd think there would be a lot of profanity, but with the exception of teenagers trying to impress people with how "bad" they are, I can't say as I've heard a lot. My knee-jerk reaction to people I care about who use profanity on a regular basis is usually, "You have a better vocabulary than that. Find a way to say what you really mean." Habitual profanity strikes me as a poverty of both spirit and language, not to mention disrespectful of anyone within earshot. And getting in the habit of using casual profanity is an invitation to say something inappropriate when you're stressed, whether you mean to or not. Like to a sentencing judge. Not a good idea.

As someone who writes mostly weird/high fantasy, I don't usually swear because it doesn't fit the theme or world. However, I have a novella with a main character who cusses nearly every other sentence, and I think that adding that little bit of reality to the urban fantasy environment really drives it home. So, if it fits the story and setting, I'd actually prefer to see swearing than not. It's kind of irritating when a full-grown man -- or even a teenager -- will only say "crud" instead of the alternatives!

Great post. I blogged something similar about the characters in my WIP. ( http://www.abbygeiger.com/cussing-characters ) Some cuss, some don't, and some can but won't. I think if it's used wisely, it adds spice and realism to the story.

Good blog topic, Sarah. I don't know if you watched the TV show, Deadwood, when it was on cable but the characters regularly used profanity. I heard this was historically accurate. Some people liked that, but not everyone who watched thought it was a good idea. I suppose the decision whether to use swearing to excess depends on your audience.

Thanks for all the comments, folks! Thanks for stopping by.

I'm a little late here, Sarah, but I just got home from being gone most of the day. Because I write cozies I don't use a lot of cuss words and only the milder ones like shit, damn and hell, and only for characters who would cuss - at least on occasion. Although I don't care to hear the F word, I can read a book where it's used sometimes without it being a problem for me if it's necessary for the character.